Rajasthan Royals (RR) beat Kings XI Punjab (KXIP) by four wickets in IPL 2020 on Sunday, in an all-time IPL classic, thanks to the wildly swinging fortunes of one man – Rahul Tewatia. Here’s a look at his story.

Rahul Tewatia became a sensation within an hour or so on Sunday, following his role in the Rajasthan Royals’ four-wicket victory over Kings XI Punjab.

Tewatia isn’t exactly a youngster. He is 27 years old, and has been around the senior cricket level in India since 2013, when he made his first-class debut. He has even been an IPL presence – at times – over the years, playing 20 matches across five seasons for various teams since 2014.

Open Account Offer. Up to ₹4000 in Bet Credits for new customers at bet365. Min deposit ₹400. Bet Credits available for use upon settlement of bets to value of 12 times qualifying deposit. Min odds, bet and payment method exclusions apply. Returns exclude Bet Credits stake. Time limits and T&Cs apply. The bonus code WISDEN can be used during registration, but does not change the offer amount in any way.

However, widespread recognition didn’t arrive till 2020 – ESPNcricinfo has a fine story about how Tewatia was mocked for ‘asking’ for recognition in the Delhi Capitals (DC) camp last year – after his extreme 31-ball knock, in which he went from a seemingly incompetent batsman to match-winner within the space of a few deliveries.

We look at his career so far, and why he slipped under the radar.

Tewatia made his first-class debut for Haryana as a 20-year-old in 2013 against Karanataka. Suffice to say he didn’t really stand out. He didn’t pick up any wickets in his six overs, and in two outings with the bat, he totalled 17 runs as Karnataka won that match by three wickets.

Interestingly, however, RR signed him up in the auctions ahead of IPL 7 soon after, with Raghu Iyer, the then RR CEO, telling DNA the leg-spinner was as talented as Amit Mishra.

Tewatia before Cottrell’s over: 17 off 23

Tewatia after Cottrell’s over: 47 off 29

Tewatia couldn’t really capitalise on his first-class breakthrough in 2013. He played his next match for Haryana in 2015, a further two in 2016, and nothing in 2018 and 2019. In all, he’s played just seven first-class matches, although he was stellar in his latest outing earlier this year, taking 7-98 in an innings against Jammu & Kashmir, and then scoring a 27* in the second innings to help his side to a two-wicket victory.

Despite that massive boost from RR, he couldn’t cut it in the IPL early on either, with the franchise letting him go after two seasons, in which he played a combined four matches – he aggregated 16 runs and three wickets in his first stint.

Since 2017, Tewatia has had a more consistent run in the limited-overs game. He made his List A debut for Haryana that year, and had his first Syed Mushtaq Ali Trophy campaign, playing five matches that season.

He also found a taker in Kings XI Punjab in the IPL, and played three matches for them that year, taking three wickets at a economical 5.44. One of Tewatia’s performances, his first match for KXIP, in fact, was a fine display of strangulation, stifling Kolkata Knight Riders’ chase after being brought on with flight, googlies and the occasional ripper. 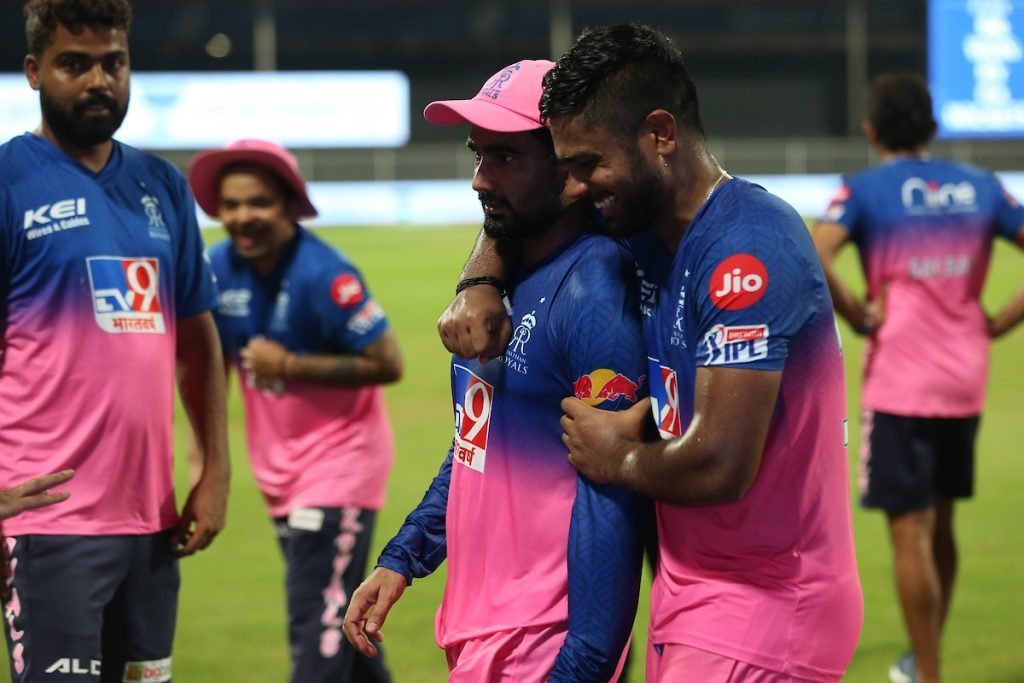 Despite that fine performance for KXIP, Tewatia played just two further matches for them before shifting to Delhi Daredevils. There, he finally got a decent run in the IPL. He played in a young team, and shared the dressing room with Ricky Ponting, and over two seasons, appeared in 13 matches – his returns were middling, with an aggregate of eight wickets and 76 runs.

It wasn’t enough to keep him in the side though, and late in 2019, he was traded back to RR ahead of the auctions.

After all that, it seems 2020 is the year in which Tewatia has finally spread his wings – and that’s not something that can be said for many people. He has looked good in his two matches so far, stifling three-time champions Chennai Super Kings with three wickets in his opening game, before his villain-turns-hero display against KXIP on Sunday.

“I think that was the worst 20 balls that I have ever played. After that – I was hitting the ball very well in the nets so I had belief in myself and kept going.” It’s been a mantra for Tewatia: keeping at it. He’s done so all his career, and on Sunday, he finally earned the recognition.

It’s not the last you’ve heard of him.