Indian actor Anushka Sharma has criticised commentator Sunil Gavaskar for his supposedly “distasteful” on-air comments on her husband Virat Kohli during an IPL 2020 match in Dubai.

Gavaskar, on Hindi commentary duties during the Royal Challengers Bangalore-Kings XI Punjab game, was discussing Virat Kohli’s batting form during RCB’s chase on Thursday. Commenting on his lack of recent batting practice, Gavaskar said, “While the lockdown was imposed [in India], he [Kohli] just faced Anushka’s bowling – you should see the video – that won’t do much [to his batting]”.

Soon after, Kohli fell for a five-ball 1, his dismissal reducing RCB to 4-3 – the side eventually managed to reach 109, but fell way short of the target, losing by 97 runs.

Open Account Offer –  Up to ₹4000 in Bet Credits for new customers at bet365. Min deposit ₹400. Bet Credits available for use upon settlement of bets to value of 12 times qualifying deposit. Min odds, bet and payment method exclusions apply. Returns exclude Bet Credits stake. Time limits and T&Cs apply. The bonus code WISDEN can be used during registration, but does not change the offer amount in any way.

The video Gavaskar was supposedly referring to was of Anushka and Kohli playing cricket outside their apartment, captured from an adjoining building during lockdown in May.

Soon after his comments, Gavaskar was criticised on social media with his actual words supposedly being lost in translation by some users (the phrase ‘Anushka’s bowling’ was carried as ‘balls’ in certain tweets), who claimed that the comments directed Anushka Sharma were of an unsavoury nature.

If this is the situation when we have all the proof on video, imagine how history has been written for centuries.

Gavaskar's exact words were that Virat was so desperate for practice that he was playing cricket in the lockdown with Anoushka & neighbours had actually taken a video of that. What exactly did he say that was demeaning? Or did you hear something that I obviously missed? https://t.co/KQK2TT5MCh

Through a statement on Instagram, Anushka slammed Gavaskar for his comments, criticising him for disrespecting the personal lives of the pair.

“That, Mr Gavaskar, your message is distasteful is a fact but I would love for you to explain why you thought of making such a sweeping statement on a wife accusing her for her husband’s game? I’m sure over the years you have respected the private lives of every cricketer while commentating on the game. Don’t you think you should have equal amount of respect for me and us? 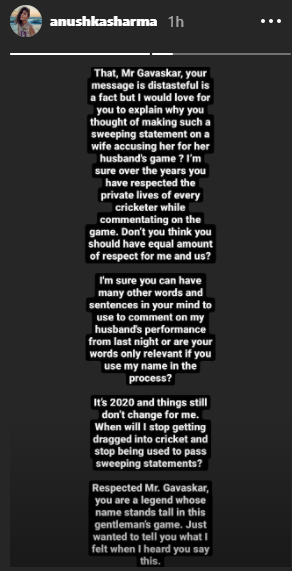 “I’m sure you can have many other words and sentences in your mind to use to comment on my husband’s performance from last night or are your words only relevant if you use my name in the process?

“It’s 2020 and things still don’t change for me. When will I stop getting dragged into cricket and stop being used to pass sweeping comments?”

Most of what Sunil Gavaskar said on commentary appears harmless, and some of his criticism appears invalid. However, as a senior professional, he should know that the Indian fan is a fickle, often toxic lot, especially on social media. Best to leave family out when broadcasting.

Having been the victim of incessant trolling from cricket fans for years, Anushka has, time and again, called out comments directed towards her from ex-cricketers – last year, she hit back at former India wicketkeeper Farokh Engineer for his “malicious and vicious” accusations, after Engineer claimed that he’d seen Anushka have access to the selectors’ seating area during the 2019 World Cup – something that Anushka denied.