Chris Jordan has built up a reputation as being one of the most reliable death bowlers in T20 cricket worldwide. CricViz analyst Ben Jones delves into the numbers to examine just how effective he is in that phase of an innings.

On Sunday evening, Chris Jordan had a nightmare. As the first innings between Kings XI Punjab and Delhi Capitals drew towards a close, it was Jordan’s side who were in control. With one over to go, Delhi had managed to splutter their way to a slightly underwhelming 127-7. Jordan was thrown the ball by his captain KL Rahul, tasked with just closing things out. One over later, Delhi walked off with a score of 157-8 under their belts.

Jordan’s final over had gone for 30 runs. No 20th over in the history of IPL cricket has ever gone for more; only five in all T20 have been more expensive. It was a staggering series of deliveries, a brutal spectacle as Marcus Stoinis hit him for five boundaries, in an eight-ball over punctuated by extras, and errors.

Open Account Offer. Up to £100 in Bet Credits for new customers at bet365.
Min deposit £5. Bet Credits available for use upon settlement of bets to value of qualifying deposit. Min odds, bet and payment method exclusions apply. Returns exclude Bet Credits stake. Time limits and T&Cs apply. The bonus code WISDEN can be used during registration, but does not change the offer amount in any way.

That sort of aberration can happen to any bowler, particularly to any death bowler. Indeed, we saw it happen to Lungi Ngidi just two days later, taken apart by the even less likely candidate of Jofra Archer. You can’t judge any bowler on their most extreme performances, be they extremely good or extremely bad. However, evenings like Sunday do invite questions, and bring to the surface debates and opinions that have been bubbling under for some time. Jordan has struggled in the IPL before. Questions that remain unsaid, typically, can be asked. Sceptics gain confidence.

“How good a death bowler is Chris Jordan?”

Without doubt, Jordan is one of the world’s most established death bowlers. Since the start of 2019, he’s bowled more deliveries in the last five overs than any other T20 bowler; since the 2016 World T20, only Dwayne Bravo has got through more work in that phase. Jordan is as experienced as they come in the game right now.

However, in this case, experience does not translate to excellence; Jordan’s actual record at the death is middling. Since that World T20, the average death over in T20 goes for 9.11 runs, while Jordan’s economy in that time is 9.33. 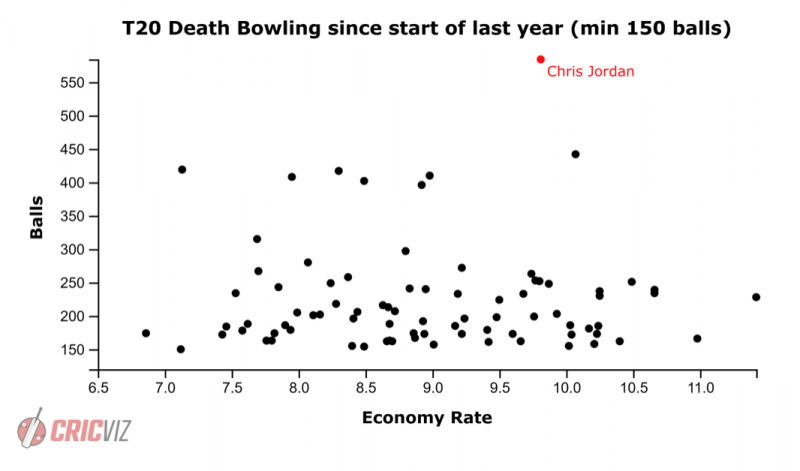 Of course, it’s important to compare apples with apples. Plenty of death bowling is sent down to world-class batsmen on flat decks, and plenty is to tail-enders on slow, difficult wickets. In some situations, an economy of nine runs per over at the death would be reigning it in against the odds, while in others it would be unsustainably leaky. Using CricViz’s Bowling Impact measure – which takes into account match situations to calculate what a bowler contributes above or below the typical bowler – we can better compare Jordan to his contemporaries. For a few years, 2016-18, Jordan was marginally better than the average death bowler, with a bowling impact of +1.2 at the death in that time. However, since the start of last year, his impact has fallen just into the negative. Essentially, over a long period of time, Jordan is essentially the average death bowler. 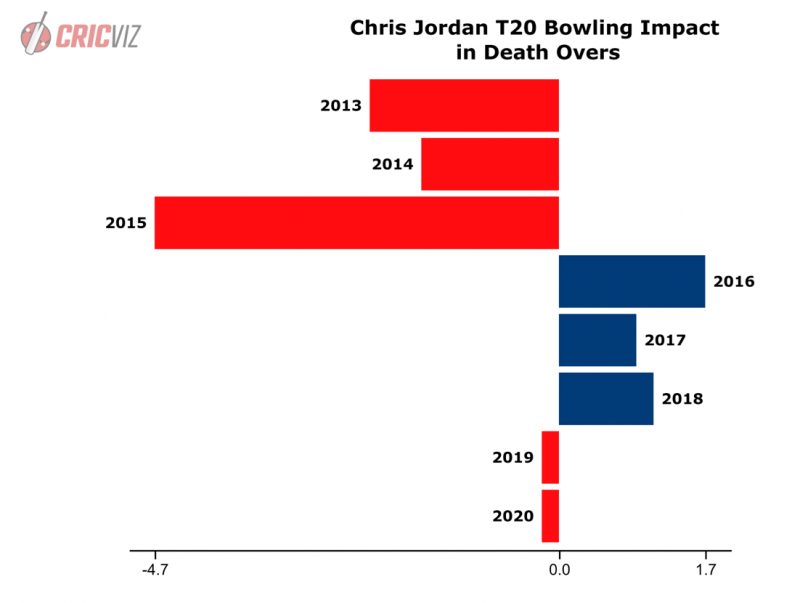 Just as with raw numbers, Jordan’s Impact figure does not compare well with his contemporaries. While the table below does not take into account the quality of the league – though it’s unclear who that would benefit – it does not make for pretty reading. Jordan’s Bowling Impact is the worst of any English seamer with a decent sample size. 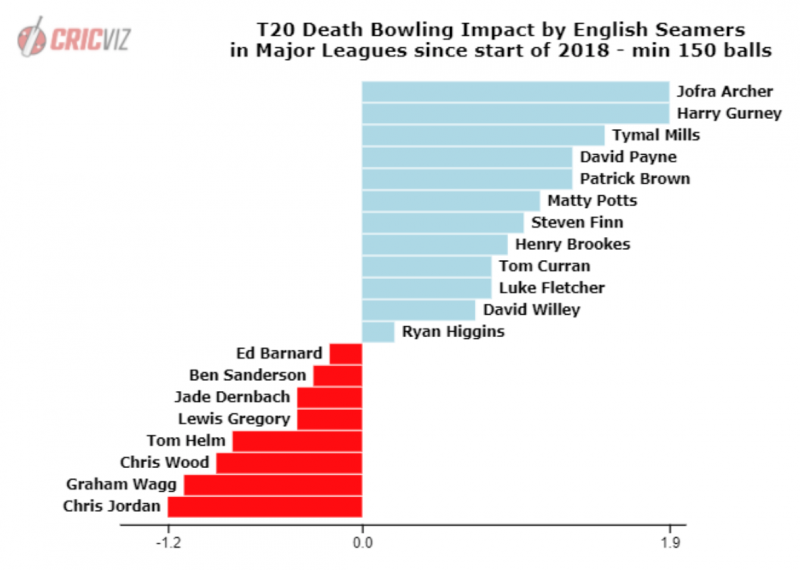 “And so why”, the emboldened sceptic asks, “does Jordan enjoy such a strong reputation?”

Well, one reason could be that despite his very modern career on the T20 circuit, Jordan benefits from actually being a very traditional white-ball bowler. Jordan’s main weapon – the yorker – is that of white-ball bowlers throughout the history of the game. If we take an ‘attempted’ yorker to be a delivery pitching up to one metre outside of the yorker length – either fuller or shorter – then only two bowlers in the world try to bowl more yorkers than Jordan does.

You can imagine how those watching him – both commentators and fans – naturally feel inclined to think of Jordan as a good death bowler, because he fits the mould of what they are used to. You may not think Jordan holds a candle to the bowlers of your youth, but there’s a pattern there you recognise and appreciate. A reassuring familiarity.

However, this very pattern could also be the very reason why his record is mediocre. Because while his yorker goes at less than a run-a-ball, when Jordan misses his yorker and falls into the zones either side the 1-2m length, his economy skyrockets. When he gets it right, pitching it in that 1-2m zone from the batsman’s stumps, his economy rate is an outstanding 5.11rpo. The issue is that when he gets even slightly too short or slightly too full, he goes the distance.

To an extent, such is the life of a death bowler. You live and die by fine margins, a heavy dew here and short boundary there causing significant difficulty. That pattern, of economies rising either side of the length box, is as true of the average bowler as it is of Jordan. But people don’t treat Jordan like the average bowler.

An alternative reason for why Jordan is held in such high regard, particularly in England, is one similar to that enjoyed by Dawid Malan – he saves his best performances for international cricket. Just like Malan, Jordan has been significantly more effective for England than he has for his other T20 sides over the last few years, meaning that English fans and journalists – who understandably watch more of him in these matches than in T20 leagues around the world – overrate his ability, and his place in the general hierarchy of death bowlers. 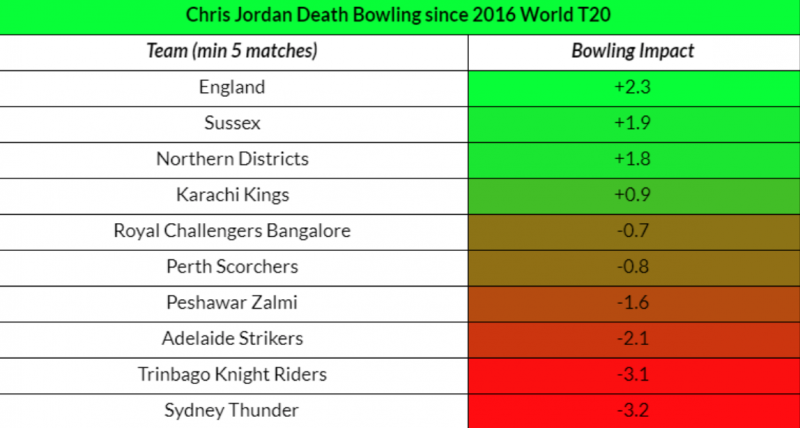 That’s not to dismiss Jordan’s performances for England. T20I cricket is not always of a higher standard than the better domestic leagues, and perspective is important, but it does come with different pressures. What’s more, the trust that Eoin Morgan has in his bowler is not to be discounted; understanding your attack, as Morgan clearly does in Jordan’s case, has value.

Jordan is a beaming, joyful cricketer. There is something fascinating about the explosive patterns of his play, his smooth action unleashing high 80s-mph deliveries after a gentle run-up, or his reflexes sending him sprawling across the square for another trademark caught-and-bowled. By CricViz metrics, Jordan is the best T20 fielder in the world, and having a player of his ability to place in ‘hot zones’, the areas where batsmen often look to hit boundaries, is an asset to any side. His batting is perhaps more suited to the longer formats, replete with a ‘proper’ technique and the temperament for longer innings, but he’s a very good No.8 in any format. His all-round contribution is a huge part of his appeal.

He has a clear profile: Jordan is a right-arm seamer who bowls mainly yorkers, a multi-faceted cricketer who could maybe bat at No.7, and a guy whose best performances come in an England shirt.

Two men who are almost the exact opposite of that, in every sense, are Tymal Mills and Harry Gurney. You might remember them from earlier – ranked No.2 and No.3 on the list of best English death bowlers, behind Jofra Archer.

Of those established death bowlers we spoke of, none attempt fewer yorkers than Mills. His main weapon is an array of slower balls, cutters, and hyper-modern variations that place him at the vanguard of death bowling. He could not look less like the death bowlers of yore. He’s not a batsman, and while a competent fielder, he has none of the flicks and tricks that Jordan does; and yet, since the last World T20, Mills’ death overs economy of 7.5 runs per over is the best in the world after Wahab Riaz.

Similarly, Gurney may be slightly tarnished in the eyes of England fans who remember his slightly ill-fated stint in the ODI side (10 matches, economy 5.79, Impact of -8.8), but since then he’s put together a body of work to rival any death bowler in the world. Since the World T20, his Impact is +2.1, better than any death bowler in the world not named Wahab or Jasprit. He may be doing it away from international cricket, but that body of work is superb. 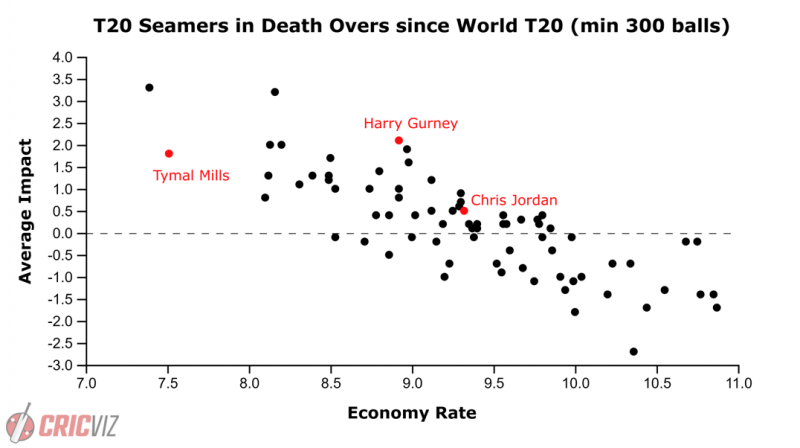 Cricket is still a sport which places a lot of trust in how things look. Cover drives and perfect yorkers can blind even the shrewdest observer to flaws and failings, and sometimes it’s hard to move beyond the gut-feeling of a player looking right. Jordan is a good bowler, and perhaps a very good player, but most importantly he plays well when more English influences are watching, and he looks more like a classical death bowler. Mills and Gurney, in different ways, do not. Yet with a World Cup on the horizon, and with all the pressure that brings, England may be better served turning their gaze away from the middle, and towards the scorecard. Because that’s where the game is won.

“How good a death bowler is Chris Jordan?”

He’s good. But maybe England can do better.