Mumbai Indians can’t ever make the playoffs without making it dramatic, can they?

The characteristic Mumbai way of punching a ticket is to lay an egg in the first half of the tournament and then go on a winning spree. It’s like the high-school troll who pretends to be losing at arm-wrestling before overpowering you and laughing in your face for thinking you could actually beat him.

This time, they actually had a pretty decent start to their season. Out of their first four matches, they won two and lost two – average by most team’s standards; amazeballs by Mumbai’s. But because this is Mumbai, progression can’t be straightforward. They had to take their penultimate game, against Sunrisers Hyderabad, into the Super Over before assuring themselves of a playoffs spot.

On a dramatic night, fans of most winning teams in such a context would have felt relieved at the end of it. But for Mumbai’s fans, the relief was probably accompanied by a tinge of shock because their team actually sealed qualification with a game to spare.

Manish Pandey. Once a candidate for India’s No. 4 spot, Manish Pandey has fallen a long way out of the selectors’ purview. But his performances this IPL season have shown why he was considered in the first place.

In his last four matches, Pandey has made three half-centuries. It was just what Hyderabad needed following Jonny Bairstow’s exit. By stepping up to the plate, Pandey has essentially ensured that Hyderabad haven’t missed the Englishman. 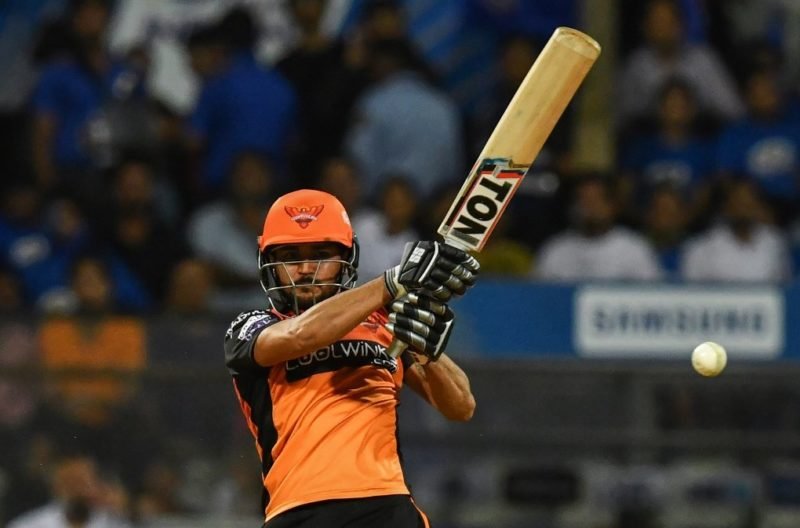 Manish Pandey played a part in Hyderabad both tying and losing the match.

On Thursday, Pandey came in at the end of the fourth over, by when Hyderabad had made a rapid start to their chase of 163. But a middle-order collapse soon undid all the good work. As is customary when that happens, the required rate steadily climbed, from 7.06 at the end of the fifth over to 12 at the end of the 16th. Hyderabad also lost four more wickets in that time. But Pandey had steadily accumulated, reaching fifty.

The dismissal of a set Mohammad Nabi in the last over turned up the pressure on Pandey, but he held his nerve to crack a six off the innings’ last ball to level the scores. To further illustrate how good he was, he even reeled off back-to-back fours off Jasprit Bumrah in the 19th over – a near-impossible task these days. If only he had managed an encore in the Super Over. Speaking of which…

Not lasting a Super Over. Though they have only two [top-order] wickets to play with, teams rarely come out looking good when they get bowled out in a Super Over. Especially when one of those wickets is lost to a run-out.

A fantastic first innings followed by @im_manishpandey's heroics to take the game to the super over! Chin up, boys. We gave it our all!#OrangeArmy #RiseWithUs #MIvSRH pic.twitter.com/GFymTgWDEM

Pandey was guilty of doing that when he tried to take on sweeper cover for a second run in the first ball of the Super Over. It’s one of those things that you can’t blame a batsman for doing, but which makes things harder for the rest of the team nonetheless. All of a sudden, you have five balls to face, need all the runs you can get, and have only one wicket in hand. It can play weird tricks and make you lose track. Hyderabad did.

Mohammad Nabi lashed a six off Bumrah first ball and lost his stumps going for another biggie off the next one. Hyderabad’s gig ended with two unused balls and Mumbai chased down the runs in half the over. In an otherwise well-rounded performance, Hyderabad’s last impression wasn’t a pretty one.

'You have to advise when I go wrong' – Hardik tells Bumrah

“It doesn’t make any difference whether you bat first or second here.”

–  Krunal Pandya doesn’t seem to believe that winning the toss gives teams an unfair advantage or any of that now, does he?

Kings XI Punjab v Kolkata Knight Riders. After the bedlam at the Wankhade, it’s going to be hard to match that state of excitement. Perhaps like their owner has done with so many other things, Mumbai will now monopolise dramatic finishes in the IPL.