Starting off the season on the back foot has become something of a tradition for Mumbai Indians, who find themselves winless after three games so far in this IPL campaign.

You’d normally back Mumbai to make a comeback and find themselves in the top four come the end of the season, but 2022 feels different. They have barely looked competitive in their matches so far, with both their auction strategy and team selection coming under fire.

We need to talk about Rohit Sharma

Skipper Rohit Sharma will undoubtedly go down as one of the greatest captains in IPL history, and for that alone you could argue his retention ahead of the mega auction this winter was warranted – even at the hefty price tag of INR 16 crore. However, his recent performances with the bat suggest his value might be overinflated.

Rohit Sharma’s Average Batting Impact in the IPL sits at -0.9 since the start of the previous ‘auction cycle’ in 2018, with just one positive season of +2.2 in 2021 coming during a down year for Mumbai. Across the previous cycle, MI’s success with the bat has more often than not come despite Rohit’s under-performance, with the remaining top six of Quinton de Kock, Suryakumar Yadav, Ishan Kishan, Kieron Pollard and Hardik Pandya all individually registering comfortably positive Average Batting Impacts. A fine quintet, they were capable of pushing Mumbai to above-average scores, and successfully chasing down targets, regardless of what the skipper was doing at the top of the order.

Since the start of 2018, 23 IPL openers have faced 200+ Powerplay deliveries – just four of them have a slower scoring rate than Rohit, and only four have a lower batting average. The India and MI legend is consistently below average when it comes to both run scoring and wicket preservation in this phase, despite his general preference for pace bowling. 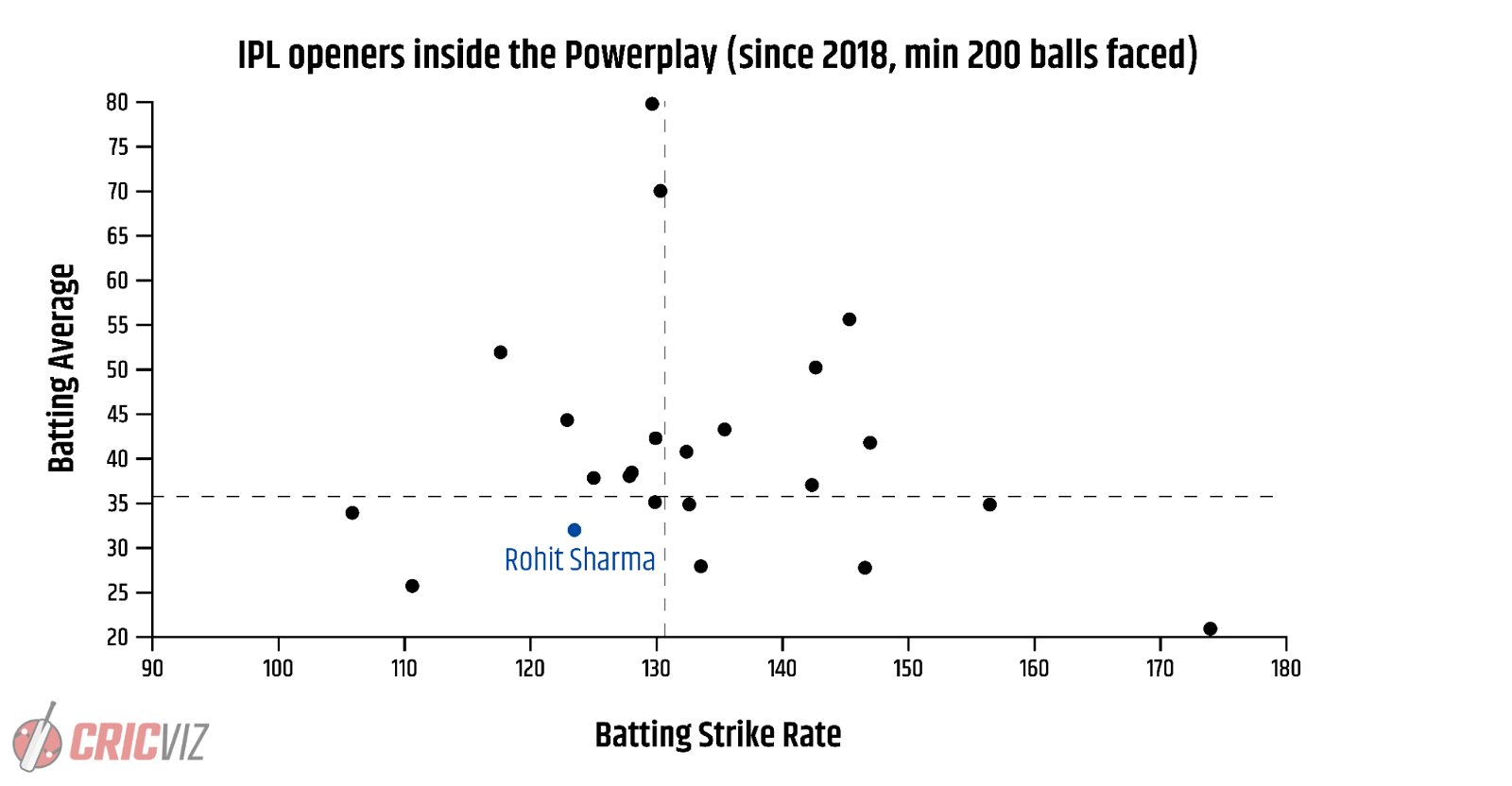 It’s not just inside the Powerplay where Rohit Sharma has had troubles at IPL level – when facing spin since 2018 his Average Batting Impact is also -0.9, ranking 34th out of the 40 to face at least 200 deliveries of spin. It suggests there’s very little argument for changing Rohit’s batting position to increase his production.

Rohit Sharma’s lowly returns with the bat were easy to ignore during the ‘glory years’, with the five high quality batters in the side able to step up and fill that void – whether or not similar players will step up during this auction cycle, after losing both de Kock and Hardik, remains to be answered. The early signs this season are not good.

Is their auction strategy holding them back in the short term?

No one to bowl as many IPL deliveries as Daniel Sams has a lower Average Bowling Impact than his -13.0, compounded by a brutal takedown from Pat Cummins on Wednesday night. His compatriot hit a remarkable 35 from one over off the left-arm pacer to take Kolkata Knight Riders over the line. Sams will more than likely drop out of the MI side going forward, replaced by Fabian Allen, but rather than question his own performance the question should instead be how he ended up in the XI in the first place – especially for a franchise so often praised for their excellent recruitment policy in IPL auctions.

Looking back at Mumbai Indians’ 2022 auction strategy is perhaps the only way to justify ending up with Daniel Sams as a starter. With rumours floating around that this could be the final mega auction, they were perhaps pushed towards an auction philosophy focusing on the future, rather than winning right now.

This is best represented by the pickup of Jofra Archer for INR 8 crore, despite the England international being unavailable for the entire 2022 campaign and with question marks over his fitness long term too. Regardless of these short term issues, the opportunity to lock in the IPL 2020 MVP was too good to turn down for Mahela Jayawardene. Tim David was the next big purchase at INR 8.25 crore, and while he’s yet to really flourish at IPL level, the Singapore international is on track to replace the ageing Kieron Pollard as MI’s senior finisher going forward.

Eighteen-year-old Dewald Brevis, dubbed ‘Baby AB’ due to his technical similarity to the South African legend, was also snapped up for INR 3 crore alongside fellow teenager Tilak Varma. Ishan Kishan was brought back for INR 15.25 crore after not being retained, locking in a considerable amount of their auction purse and leaving them scrapping for bargains to complete their side. Picking up the likes of Tymal Mills and Murugan Ashwin for INR 1.5 crore and INR 1.6 crore respectively represents good value and goes some way to filling gaps in their bowling attack, but the two remaining positions alongside stalwart Jasprit Bumrah have arguably been the most costly so far. Basil Thampi and Sams himself have failed to replace the work of Krunal Pandya and Trent Boult who occupied their roles before them.

Despite the clear motive to build a team for the future there’s still scope for them to improve in the present before their next opportunity to turn over the likes of Sams and Thampi, and while Mumbai Indians may have to experiment further to find value to go alongside their senior big hitters and potential young superstars, there are a couple of like-for-like options in the squad.

We could see exciting young Aussie quick Riley Meredith make his way into the Mumbai Indians XI alongside left-arm spin bowling all-rounder Sanjay Yadav, who could replicate the role of Krunal Pandya in previous years by buffering the batting lineup at No.7 and combining with Kieron Pollard to complete the fifth bowler quota. Whether or not the decision to replace Tim David with Dewald Brevis will be reversed in their next match is another question. As fun as Brevis’ cameo against Kolkata Knight Riders was, Mumbai Indians are a better side with Tim David, regarded as one of the world’s best finishers, in it.

The kids are alright

One bright spark for Mumbai Indians has been the performance of Tilak Varma in their opening three encounters. The southpaw has excelled in a middle order batting role, particularly facing spin, scoring 74 runs from 45 balls at a strike rate of 164. At just INR 1.7 crore, the 19-year-old represents the usual shrewd business you’d expect from Mumbai Indians and locking him in for years to come will be crucial to making this strategy a success.

Varma’s early emergence perhaps offers some comfort to Mumbai Indians fans going forward – it’s hard to not get excited about a potential batting core of Kishan and Brevis as openers with Varma in the middle and David in the finishing role, complemented by a bowling attack spearheaded by Jofra Archer and Jasprit Bumrah.

The T20 world moves quickly. While established names like Rohit and Pollard still have something to offer, Mumbai Indians’ longer term auction strategy looks to be based around youth. Even if it leads to a sub-par campaign in 2022, this potential core with the added sprinkle of Mumbai Indians scouting that brought us the Pandya brothers and Bumrah could turn into something special in future. If Mumbai Indians’ strategy to ‘tank’ during this opening campaign in order to build a dynasty, it may just be worth it.