A spectacular piece of fielding in the Big Bash League has led to renewed debate over the laws regarding boundary catches, with some feeling a change is needed.

The incident occurred in the 15th over of Hobart Hurricanes’ first innings against Brisbane Heat. Matthew Wade hit Ben Cutting into the deep at long-on, where Matt Renshaw caught the ball, releasing it before stepping over the rope. He then jumped, from outside of the field of play, and palmed the ball to his team-mate Tom Banton, who completed the catch.

Both fielders looked confused initially, with Renshaw making a signal with his arms to indicate it wasn’t out, and the umpires were unsure at first too, with TV umpire Simon Lightbody heard saying it was “not out” on air, before reversing his judgement after another look.

This is dividing opinion. Out or not out, what do you think?#BBL09 pic.twitter.com/UlwkZ0yDod

By the letter of the law, the right decision was reached in the end.

Law 19.5.2 - Fielder grounded beyond the boundary

19.5.1 A fielder is grounded beyond the boundary if some part of his/her person is in contact with any of the following:

– the ground beyond the boundary;

– any object that is in contact with the ground beyond the boundary;

– another fielder who is grounded beyond the boundary, if the umpire considers that it was the intention of either fielder that the contact should assist in the fielding of the ball.

However, the law itself soon came in for criticism, including from New Zealand cricketer Jimmy Neesham. He first labelled the decision a “shocker”, and then when it was pointed at that the laws had been applied correctly, called the laws “farcical”. 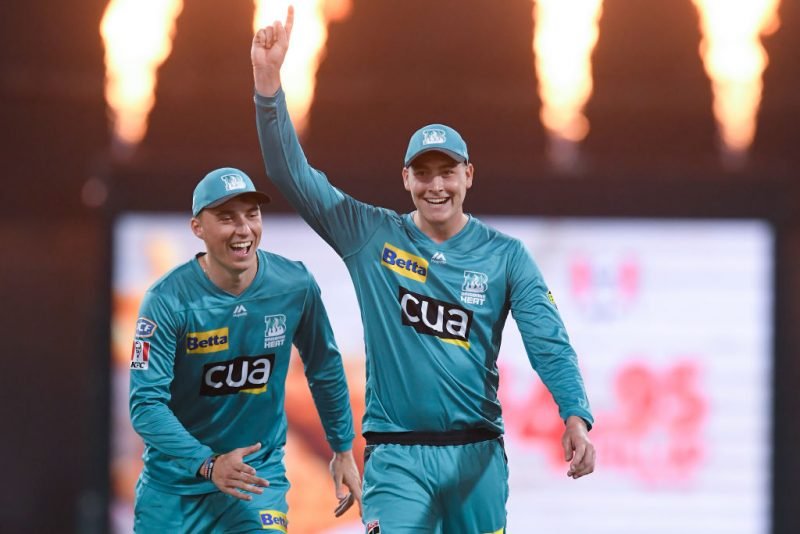 Matt Renshaw and Tom Banton combined for a spectacular fielding effort. But should the catch have counted?

“After he touches the ball he needs to end up back in the field of play,” he tweeted. “If that’s not the rule then the whole thing is farcical and the rule needs to change.”

Confusingly, up until a change to the law in 2013, made to encourage displays of athleticism like Renshaw’s, the ‘catch’ would have been ruled as ‘six’ rather than ‘out’. The change has previously come in for criticism by Australia all-rounder Glenn Maxwell, even after he was a beneficiary of the change.

I’ve got no problem with where he left from. It’s where he ends up. After he touches the ball he needs to end up back in the field of play.

If that’s not the rule then the whole thing is farcical and the rule needs to change. https://t.co/Y797AsxP5G

“I don’t think it makes a whole lot of sense,” Maxwell said back in 2015. “I think you should have to get back into the boundary. I think if you look at the basketball rules you have to jump from inside to throw it back in, you can’t jump up in the air and catch it on the way back in.

“You’ve got to make sure your feet have landed inside the court and I think it should be the same in cricket. While we’re taking catches on our side it doesn’t really bother me, but I know if I was a batsman I’d be pretty upset if that was the dismissal.”

Brisbane Heat went onto secure victory by five wickets, but the debate rages on.