Rogers arrived at the crease at the fall of the sixth wicket, when Akeal Hosein tried to slog Zampa but top-edged, during a Melbourne derby clash of the Big Bash League at the Melbourne Cricket Ground. He got off strike the first ball he faced with a cover drive, and a wild throw allowed Mackenzie Harvey to complete a second run off the next ball.

Two balls remained in the Renegades innings at this point. They were 139-7. Zampa ran in to bowl at Harvey.

It is not clear when Zampa noticed Rogers’ position, but he did not release the ball at all, though he went through with the motion. Instead, he stopped in his run up, turned around, whipped off the bails, and appealed. By then, Rogers had reached the point of no return.

The umpires conferred, then ruled Rogers not out. It was apparently based on Law 38.3.1 (“If the non-striker is out of his/her ground at any time from the moment the ball comes into play until the instant when the bowler would normally have been expected to release the ball, the non-striker is liable to be Run out”), but it was not immediately clear why. Rogers had indeed left the crease after the ball had come into play and before the point Zampa would ordinarily have been expected to release the ball. 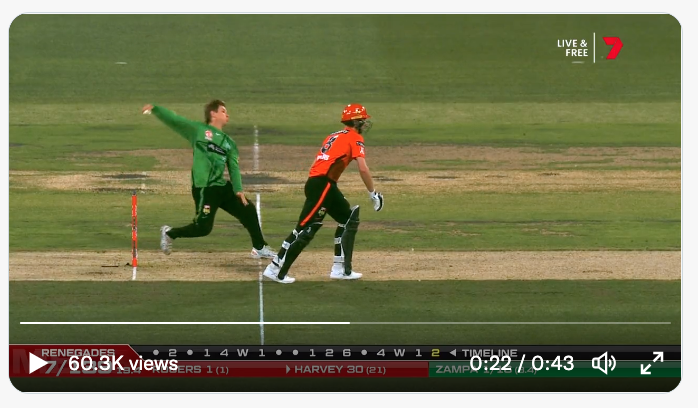 Some time later, the MCC, custodians of the Laws of Cricket, tweeted a clarification.

The non-striker can be run out if he/she is out of his/her ground up until the moment the bowler would normally have been expected to release the ball.

That means when the arm gets to its highest point. (1/2)#MCCLaws | @BBLpic.twitter.com/fWtdJAtIh1

Adam Zampa's attempt at a run out was deemed by the Third Umpire as not out 👀#BBL12 pic.twitter.com/cvhlLBwig5