The Bangladesh Premier League moves into its eighth season in 2022, here’s where you can watch the T20 tournament live, with TV channels, telecast schedule and live streaming details of BPL 2022.

The 2021 edition was originally supposed to be held in March last year, but was postponed to a January-February window in 2022. The tournament, set to be held from January 21, 2022, to February 18, 2022, will be played behind closed doors.

Six teams will be taking part in the competition: Chattogram Challengers, Comilla Victorians, Dhaka, Fortune Barishal, Khulna Tigers and Sylhet Sunrisers. They will play a total of 34 matches, which will be succeeded by four games in the playoffs stage.

Rajshahi Royals, who were crowned champions last year, are now defunct, with the Rangpur region also not having any franchise to its name. Barishal, which did not have a franchise for half a decade, will mark their return to BPL for the first time since 2016.

There will be no DRS used at the tournament this time.

There are eight rest days in all, with reserve days before each of the playoffs. Teams will play first qualifier and second qualifier, before the final on February 18. 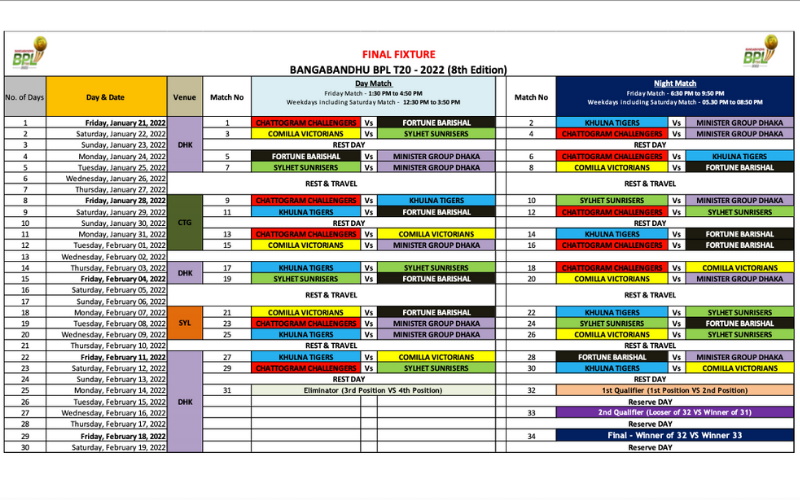 BPL 2022, where to watch: TV and live streaming details

India: The tournament will be live telecast on the FanCode mobile app.

Bangladesh: On TV, Matches will be telecast on Gazi TV and T Sport.