The fifth edition of the Women’s Big Bash League concluded on Sunday, December 8, with Brisbane Heat winning their second consecutive title. The Heat were one of the best teams in the tournament and have flourished since the past two seasons.

They defeated the formidable Adelaide Strikers by 6 wickets, chasing down 161 with 11 balls to spare.

Throughout the month and a half long tournament, there were some incredible performances. Here is Wisden’s team of the tournament – the women, who mesmerised with their talent and skills. 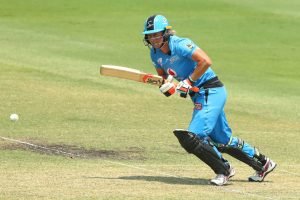 Sophie Devine was the Player of the Tournament

Hard to look beyond Sophie Devine when it comes to choosing someone who not just lit the tournament on fire but also produced an all-round performance that might go unmatched for a long time. Devine’s purple patch was several shades darker than the rest as she amassed 769 runs at a whopping average of nearly 77.

She was equally adept with the ball, taking 19 wickets at 20.68 and was a live-wire in the field, taking a total of 10 catches. She helped the Strikers reach their first final, with a dashing 65 not out in the chase of 126. She was named the WBBL Player of the Tournament this season and rightly so but a failure in the final meant that the Strikers lacked a commanding total on the board and failed to challenge the strong Brisbane Heat batters.

The team of the tournament will not be complete without Beth Mooney, whose consistency was only second to Devine’s. She finished just 26 runs short of Devine’s run tally but trumped when it mattered the most, her unbeaten 45-ball 56 proving instrumental in Heat picking up their second WBBL trophy. She hit 82 fours in the tournament, 14 more than the second best and impressed with her nine half-centuries. She was also dazzling behind the stumps with nine dismissals to her name.

Danni Wyatt has been a dynamite for England and she was instrumental in helping the Renegades finish in top four with her big-hitting prowess. She was their second-highest scorer in the season and her strong starts boosted the Renegades totals in a lot of games. Unfortunately, her England duties beckoned and she had to miss the semi-final, where, without her, the Renegades could only muster a modest total, which the Brisbane Heat chased down with two overs to spare.

Meg Lanning embodies the ‘Form is temporary, Class is permanent’ maxim to a tee. While she began scoring runs from the Scorchers’ second game, she was inconsistent at the beginning and looked scratchy. But as their campaign progressed, she was back to being her usual self. She finished as the tournament’s fourth-highest run-scorer and also scored her first WBBL century this season – a 101 against the Hobart Hurricanes in their last league game. However, a poor performance in the semi-final meant that the Strikers pipped them to a spot in the final.

What else could be the testament to Ellyse Perry’s greatness than the fact that she played at least five to six matches fewer than the others, yet finished in the top 10 of the highest run-scorers in the tournament with unequivocally the best average – a stupendous 93.80, miles ahead of the second best. If not for the shoulder injury that forced her out of the season, Devine’s place at the top would have been[ threatened. She also took four wickets in the tournament and earned the Player of the Match award thrice.

Jess Duffin emerged as one of the stars of the tournament and has convincingly proved her case for a look-in in Australia’s squad for the upcoming Women’s T20 World Cup. Duffin led the Renegades not just with the bat, having finished as the third highest run-scorer but also with her captaincy, admirably mentoring young bowlers. She played a key role in Renegades must-win clash against Sydney Thunder, her half-century pushing them past 150 and giving the bowlers something to bowl at.

A whizz with both bat and ball, Jess Jonassen enjoyed her most successful WBBL season yet. She had picked up 17 wickets in the last season for Heat and added five more to the same tally in this edition. If she was good with the bat last season, she was even better in this one, only behind Mooney with her consistent performances. She was the Player of the Match in Heat’s semi-final against the Renegades, taking the key wicket of Jess Duffin and scoring a quick-fire 38 with the bat.

Marizanne Kapp is an all-rounder who makes a difference. She was a star in the Sixers’ bowling line-up, a side which is dominated by some of the best batters in the tournament. Yet she held her own, routinely picking up wickets and scoring handy runs. She also scored two half-centuries in the tournament, amassing 232 runs apart from her 15 wickets.

She may have only just wrapped up her debut @WBBL campaign, but Hannah Darlington couldn’t miss the opportunity to represent the Thunder Indigenous XI this week ?? #ThunderNation #IndigenousT20Cup pic.twitter.com/s5hX7asjAG

17-year-old Hannah Darlington may be young but her age belies her talent. She was named as the ‘Young Gun’ of the tournament and was a bright spot in Sydney Thunder’s otherwise dismal campaign, in just her first ever WBBL season. Her best figures of 3 for 29 came against the runners-up Adelaide Strikers, who the Thunder defeated in a terrific Super Over encounter.

Undoubtedly, Molly Strano was the best bowler of the tournament and fought for the Renegades right until their loss in the semi-final against the eventual champions Brisbane Heat. The off-spinner was lethal, both in the powerplay and at death, her captain Jess Duffin always relying on her to pull the team out of desperate situations. She picked up four wickets in the semi-final but was let down by other bowlers and an unassuming total that her team put up.

Originally from Sydney Thunder, Belinda Vakarewa moved to the Hurricanes and instantly made an impact with her disciplined bowling. While the Hurricanes’ season was nothing to write home about, having finished second last in the table, Vakarewa’s exploits made her the overall third highest wicket-taker in the tournament.

There is an undeniable charm that Alyssa Healy brings to the table. Her slight frame belies the strength she possesses when it comes to sending the ball over the ropes and her amazing agility behind the stumps is matched by few. Healy was the Sixers’ second-highest scorer in the tournament with 383 runs. She was one of the only three players, who hit a century this season; her 53-ball 106* came against Melbourne Stars, in a match where she also shared an unbeaten 199-run opening stand with Ellyse Perry. She was also the second-best wicketkeeper in the tournament, effecting 10 dismissals. But a poorer average and the fact that the Sixers did not qualify for the knockouts meant that Mooney took her spot in our playing XI.