Virender Sehwag, the man who redefined batting in the modern era, picks his 10 most defining knocks in a chat with Jo Harman. Introduction by Roshan Gede.

Destructive, ruthless, unstoppable – Virender Sehwag was India’s premier match-winner throughout his 12-year-long career. The ‘see the ball, hit the ball’ mantra was one he stuck to through all those years at the top level, irrespective of the game, the scenario or the format, and on most occasions, the good were delivered.

He didn’t mind taking on bowlers at the very start of a match, and that tenacity didn’t waver when he approached a milestone – he famously tonked Saqlain Mushtaq for six in the Multan Test in 2004 to become the first Indian to score a triple century in Test cricket. Four years later, he would register his second triple hundred – the fastest in Test history – and thereby joined Don Bradman and Brian Lara as one of just three players to reach that landmark twice.

Imagine, then, how lethal he was in limited-overs cricket. He was among the core of the Indian side that took giant strides in the game in the latter half of the Noughties. He was a key figure as India won the 2007 T20 World Cup as well as the 2011 ODI World Cup. Later in 2011, he became only the second cricketer to register an ODI double-hundred, against West Indies in Indore.

Overall, Sehwag scored over 8,000 runs in both Tests and ODIs, and boasted an astounding strike-rate of 82.23 in the five-day game – the best among players with more than 2,000-Test runs. In ODIs, he formed a formidable opening partnership with Sachin Tendulkar – the pair aggregated 3,919 runs from 93 innings, which was the sixth-highest overall.

His 10 best moments, in his own words, below:

I scored my maiden hundred in my first first-class innings – batting at No.7 – in a four-day match and then went on to score three or four Ranji Trophy hundreds in my first season for Delhi. I knew I could score runs against any bowling attack, so I had the confidence and self-belief – I was mentally very strong.

I had played about 30 one-dayers before my Test debut. Everyone was saying that I was a very good one-day player but my technique was not that great so I could not play Test cricket. I was waiting for the chance to prove everybody wrong. I scored a hundred in my debut Test against South Africa, batting at No.6, so that was the message I sent to my critics. I was always convinced I had the technique for Test cricket.

The move up the order

“I missed my hundred when Ashley Giles got me out on 84, but I had become an opener”

I‘d never wanted to be an opener. I’d batted in the middle order all my life, wherever I played. My destiny changed when Sourav Ganguly and John Wright asked me to open at Lord’s, in my first Test in England. I told Sourav and John that I would open the batting if I was given three or four chances and if I failed as an opener then they would give me another chance in the middle order. They gave me their word. I missed my hundred when Ashley Giles got me out on 84 [from 96 balls], but I had become an opener.

Everyone was talking about Sehwag as an opener in Australia on fast and bouncy tracks, saying that I would not score runs and it would be difficult for me against quality bowling. That was a challenge. On the first day at the MCG I scored 195 [from 233 balls]. In the press conference afterwards a reporter asked if I regretted not scoring a double hundred. I said I was lucky enough to score 195 in a day, something no other batsman had done at the ground. I had broken Viv Richards’ record [for the most runs scored in a day] at the MCG, so I was very happy.

I scored 70-odd in the first one-dayer before the Test series and then for the next four one-dayers I didn’t score any runs. I was telling myself that the moment the Test series came along I had to make it pay, because if I didn’t score a hundred or double hundred, then the selectors would drop me as I had not been consistent in previous matches. I scored 228 on day one and then the next day I started like it was the first, batting very cautiously in the first half-hour before starting to play my shots. When I was on 280, Tendulkar said, “Do you know that if you score two more runs you will break Laxman’s record for the highest score ever by an Indian?” Next ball I nicked it and it went for four between the keeper and slip! Later, when I was on 295, before Saqlain Mushtaq bowled I told Sachin that whether it was slow, fast or whatever, I would step out and hit him for six. He said, “Are you mad?” I said, “No, whatever will happen, will happen. I don’t care, I want to hit a six now”. I hit the ball for six and became the first Indian to score a triple century.

The day the stars aligned

We’d fielded for about 150 overs when South Africa declared, leaving us 20 overs in the day. I told [opening partner] Wasim Jaffer it was a good chance to score quickly. He said: “Are you mad? Let’s just survive.” I said: “Ok, you survive, let me play my game.” I was 52 not out at stumps. I went back to the hotel and my son – who was about six months old and never slept during the night, ever – slept with me from 9pm until 6am. Then I got a call from my friend telling me that today was the best day if you are a Libra, so, as a Libra, I should go and do whatever it was I wanted to do. I remember crossing the line and looking up to tell God that if today was my day, then South Africa had to pay. The rest is history. I ended up scoring the fastest Test triple century.

“It was astonishing enough when he did it in conducive conditions, but when he did it on unplayable tracks, we knew we were witnessing a special human being at work.”@axk92 on Sehwag’s 201* in Galle in 2008, No.5 in Wisden’s Test innings of the 2000s.https://t.co/wCCateVe9s

We’d lost the first Test and lost badly, with Mendis and Murali ripping us apart. In the next match Gautam Gambhir and I put on 170 but we then lost wickets and were under pressure. I decided it was difficult for the tail-enders against Mendis and Murali and tried to keep the strike. On 199 I turned down a single because I was batting with Ishant Sharma for the last wicket and it was only the third ball of Murali’s over. I blocked two more balls and then took the single off the final ball to complete my double hundred. The moment Ishant got strike in the next over he got out first ball! I became the first Indian to score a double hundred against Sri Lanka, in Sri Lanka, and the second Indian after Sunil Gavaskar to carry my bat. 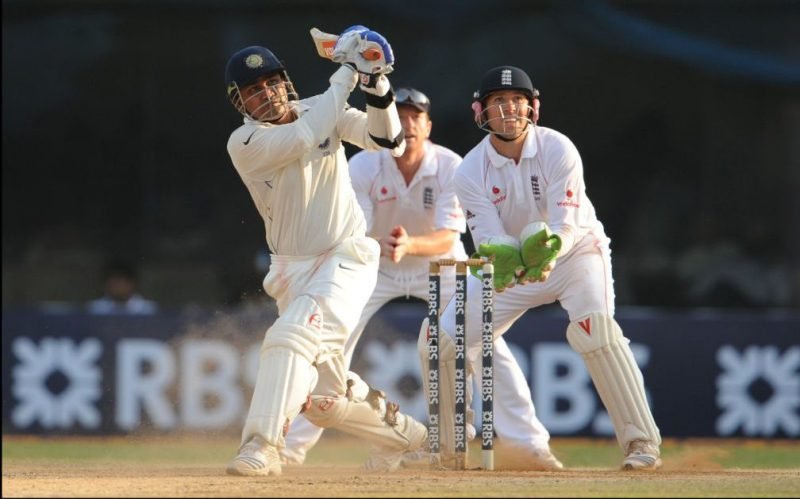 We had 387 to chase and I said I would go after the bowling. If I got going we had a chance to win the Test and if I got out then we had plenty of batting to bat out four sessions. I scored 80-odd in about 20 overs and next day we only needed to score another 250 with nine wickets in hand, which we did. Whatever you want to do, if you have the belief then you can achieve it. After the terror attacks in Mumbai we wanted to give a message to the whole of India: don’t worry, keep cheering and as long as we are together we can tackle anything.

I regret that I missed out on becoming the first person to score three triple Test centuries because I was playing so well I should have got that third one. The wicket was good, the bowling attack was not that great and I just missed out. But credit goes to Muralitharan – he got injured before that match and had a swollen hand but he still took a caught and bowled to get me out. Maybe I wanted to score that third triple century so much, that’s why I didn’t score it. If I had just played the way I wanted to play, then I would have got there. 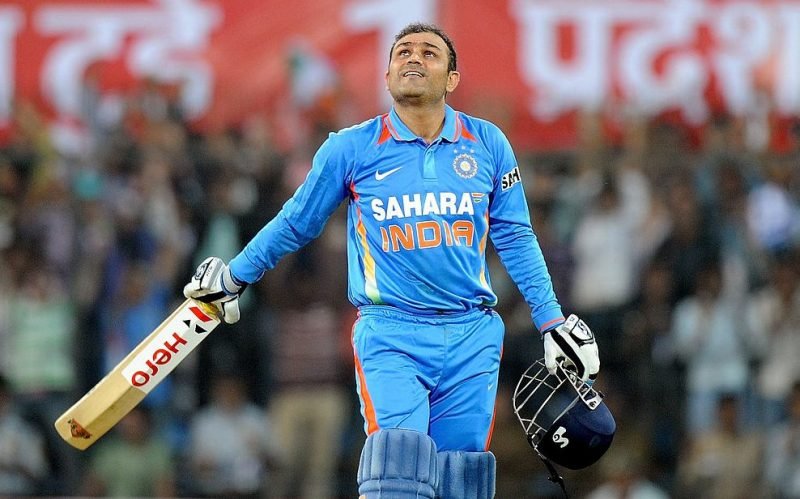 Sehwag stroked his way to 219, which was the highest individual score in ODIs at the time

In the first three games I didn’t score any runs, I kept getting out early. I was telling myself that when I got a good start I had to keep batting until the 40th over and if I did then maybe I could achieve 150 or 160 runs. But when I was batting in the 40th I was on 180-odd and I realised there was a chance to break Sachin’s record. In the 43rd over I scored my double century and after that I got out on 219 with three overs to go. If I had batted three more overs I could have got 250 and nobody would have broken that record! If it is my day, then it is very difficult to stop me or get me out.