Wisden.com columnist Kumar Sangakkara continues his series on the greatest players of his era. This time, the man with more Test wickets than anyone else, Muttiah Muralitharan. First published in Wisden Cricket Monthly.

Murali, over the years, was a subject of much debate. At the start of his career, in the mid Nineties, they talked of Murali for the wrong reasons; later on, the debate ensued about whether he or Shane Warne was the best spinner of all time. At the end of his career he took his 800th Test wicket, to finish as the highest wicket-taker of all time. I don’t think that record is ever going to be broken.

I first met Murali when I was 13 – his cricket coach at St Anthony’s College was my batting coach at a very young age. One day I went to the college and my coach said, “I have someone to bowl at you”. And they got Murali. I remember at that time he was able to turn the ball square. As a young kid I didn’t know how lucky I was to play a bowler who was going to become one of the greatest of all time. He bowled a few balls, and I faced some more throw-downs, but looking back – if I’d have known what he was going to become, I’d have been completely star struck.

He was the match-winner for Sri Lanka. He accepted the pressure. He was a man who was always smiling. He never sledged. He would always be on good terms with the opposition, to the point of annoyance sometimes

I remember an over which Murali bowled at Allan Border, in which he kept playing and missing. And Border came back into the dressing room and said, “He’s a really good leg-spinner, he just bowls a lot of googlies!” So even at the inception of his career, he was such a wristy bowler that even batsmen of the calibre of Border mistook him for a leg-spinner. Murali was probably the first wrist-spinning off-spinner. I think his first forays into Test and ODI cricket hinted at what he was to become.

He was one of the slowest to take 100 wickets in Test cricket, but one of his most telling spells was that famous 1998 Test match at The Oval, where he took nine wickets in the second innings and had the opportunity to take 10, were it not for a run out by a substitute fielder. And that probably started the legend of Murali, the man who would bowl Sri Lanka to victories both home and away. 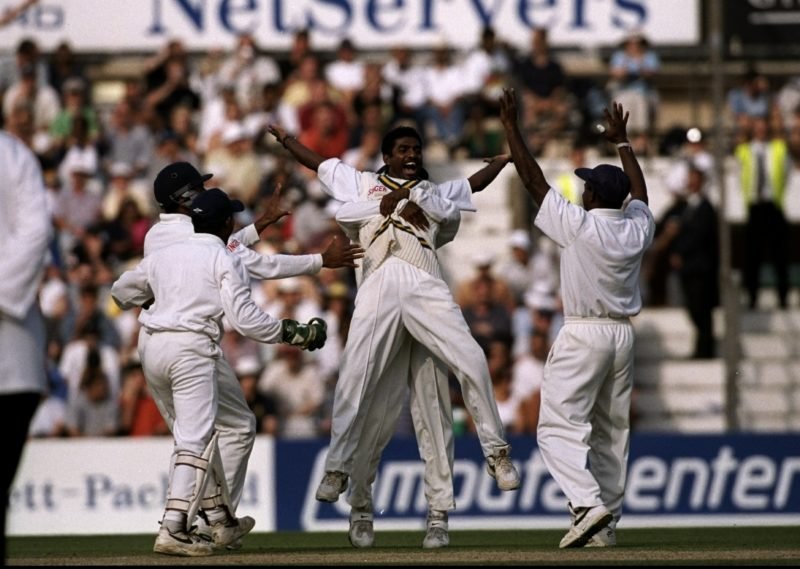 But everyone who has watched Murali down the years perhaps misses the amount of work he puts in to achieve the genius. I remember when he first started, he was bowling so many hours in the nets – so much so that the coach had to take the ball away from him. Towards the end of his career, he was still bowling the same amount of deliveries. I used to ask him at the end, “What’s wrong with you?” And he’d look at me and say, “You know, Sanga, the important thing for me is that I can turn up at a game so that I can run in with my eyes closed and pitch the ball wherever I want it to pitch.”

That was a great lesson. Whether he’d taken 10 wickets in the previous game – his preparation was meticulous. It was all about building confidence in himself. And I tried to develop my method of batting on that philosophy: my preparation becomes my most important building block. 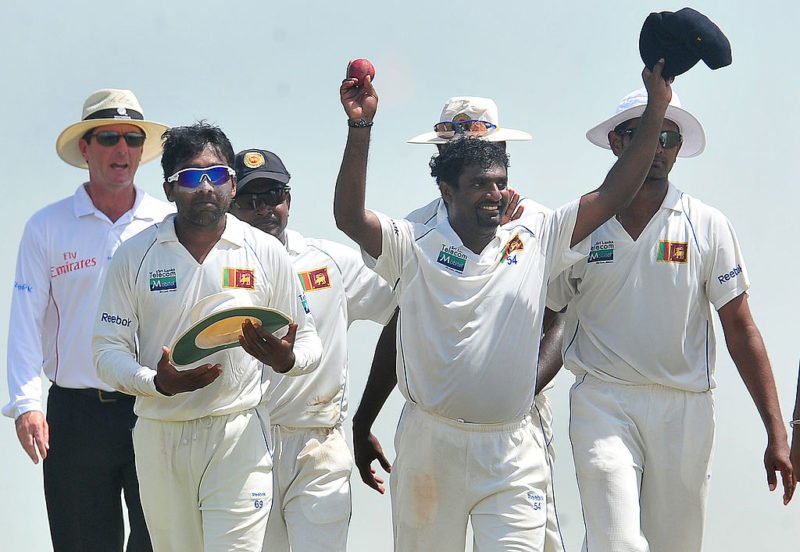 Another thing people miss was that every game for him was played as if it was his first. The nerves, anticipation, butterflies in the stomach; you could see his excitement to get the ball in his hand. Just before we’d field he’d sometimes go to the bathroom to throw up, he was that nervous, and that was after he’d taken 700 wickets. It was lovely to see that he had that much passion for the game.

I remember when he was about to retire, he had to take eight wickets to reach that 800-mark. I was captain at the time, and after speaking with the board, we were all of the opinion that we wanted him to take 800 wickets. He’d wanted to retire after the first Test but we thought it could be hard to achieve in one. So we called him into the meeting and explained that he could take as many matches as he wanted to reach 800. He smiled and said, “Thank you, but I believe I can take eight wickets; I don’t believe I’m fit enough to play two Test matches on the trot. And I think it’s unfair on the side.” That was the measure of the man. The grace to understand that he was never entitled to his place, and that he considered it a privilege, was a wonderful way of encapsulating who he was. He’s not just a great player but a great human being. 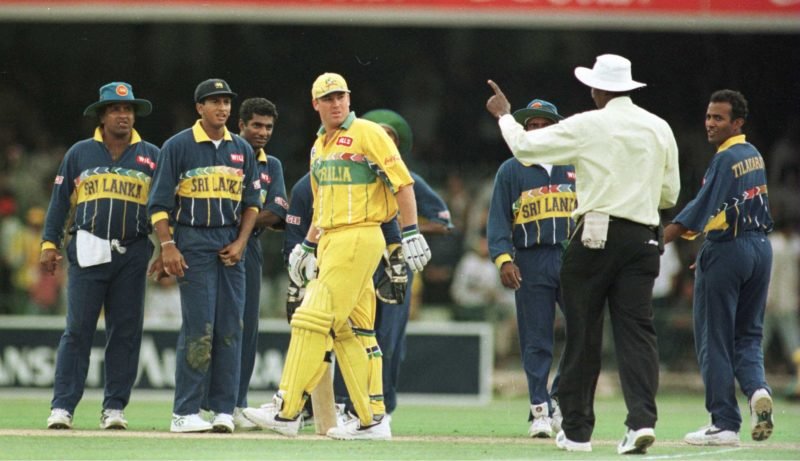 There was another incident against Zimbabwe. Murali had taken most of the wickets and then dislocated his finger, going for a catch. Come the end of play, we were all very concerned whether he could continue. So we went to his room door and kept hearing this thud from inside the room. When we entered we saw him, with his finger strapped up, bowling with a ball against his wall. He was testing if his finger was OK. He came back the next morning and finished with nine wickets.

He was just a tireless performer. He was the match-winner for Sri Lanka. He accepted the pressure. He was a man who was always smiling. He never sledged. He would always be on good terms with the opposition, to the point of annoyance sometimes. All this sledging – it didn’t matter to him, because he knew his skill was good enough to overcome any opposition in any condition. He didn’t have to put on this false exterior. The opposition knew the moment they saw him run in with those wide intense eyes, the way his body contorted, the amount of revs he put on the ball, and the passion with which he bowled. The batsmen knew they were in for a fight. 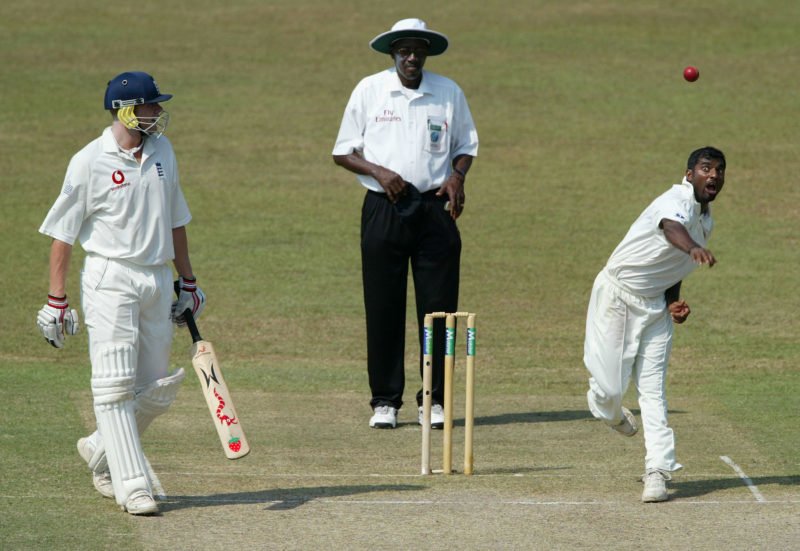 I think the no-balling of Murali was what drilled us together into a World Cup-winning unit, where we embraced a common cause. Sri Lanka embraced the team as their own, because they felt they had to protect and defend this grossly unfair attack on one of our players. Suddenly, everything about this wonderful cricketer was called into question. Buying into this Sri Lankan team as “our team” and Murali as “our Murali” gave us a goal. Let’s stand up to be counted. We know what can beat the elite, we just need to believe that. And Murali gave that belief.

When I came into the side, the controversy was never far from him. Once we were in Australia and I’d seen Murali bowling in a cast. Dr. David Young, a great supporter of Sri Lankan cricket, made this cast so Murali could neither bend nor straighten his arm. And Murali still bowled his doosra and his off-break with this cast on.

His friendship with Andrew Flintoff was amazing. They had an unwritten agreement where Freddie would not bowl bouncers to him and Murali would not bowl a doosra to him

Once we were touring Australia in the 2000s and there was an Australian bio-mechanist who wrote, saying, “he’s bowling the doosra at this pace – there has to be a kink in his action”. We turned up in Perth, and Murali was missing. We go back to the hotel, found him and he said he’d gone to be tested. He just volunteered.

There were times when he felt upset. In Brisbane, when he was bowling in a tight one-day match, he had one or two overs left and he sprinted to the boundary line after a ball. And he twisted his foot. He came back limping to the umpire. He said that when he hurt himself and couldn’t get up, he heard the crowd laugh and make some comments. And that didn’t stand well with him. When we said he should leave the field, he said, “No, I’m going to finish my spell.” He bowled off a step and managed to get Shane Watson out. He never shied away from bowling – whenever there was controversy, he stood up to be counted.

Related Story: Murali: Lyon’s ‘not good enough’ to get close to my record, but Ashwin is

His friendship with Andrew Flintoff was amazing. They had an unwritten agreement where Freddie would not bowl bouncers to him and Murali would not bowl a doosra to him. There was this instance where Freddie came to bat in Sri Lanka and Murali said to Freddie, “I’m pushing mid-on back. This one’s an off-break, just punch it to long-on and run,” and he did that so Freddie could get off the mark. Of course, a few balls later Murali managed to get him out. I remember batting to save a Test match at Lord’s and I think either Nasser Hussain or Michael Vaughan was getting very angry at Freddie, because he refused to bowl Murali a bouncer. It was wonderful to see what Murali brings out in other people.

Sometimes players are admired for who they are and what they do on the field, but I think Murali’s legacy will be most felt off the field. His work for the Foundation of Goodness, his work for the reconciliation in the north-east of Sri Lanka, the amount of work he has done in Sri Lanka to bridge the gap between rural and urban communities; that is a legacy that will not be seen by a lot, but I think the long-term effects will be felt by so many people who may never meet him. His cricket will have inspired millions to take up the game, but the largeness of his heart can be seen in the work he has done without the camera, without the crowd; in his private capacity.