Nearly a year on from the day Ireland rocked up at Lord’s and bowled England out for 85, Tim Murtagh speaks to Taha Hashim about his historic five-for in what proved to be his final international match.

A sweltering day, a packed Lord’s and the opposition recently crowned 50-over world champions. For Tim Murtagh, the turf was familiar; having crossed the river from Surrey to Middlesex in 2006, he’d spent over 12 years calling the place home. But on that July morning, the Lambeth-born Murtagh was an Irishman and back in the away dressing room. There was some edginess.

“I was a bit nervous because it was a Test match at Lord’s,” Murtagh says. “It was my first Test in England and to play the new world champions at Lord’s, it doesn’t get much better than that.”

After Joe Root chose to bat on the greenest of wickets – “Two days out I was licking my lips” – Murtagh took the new ball from the Nursery End, “where I’ve always bowled”, and thus began the spell his career will be defined by: 9-2-13-5.

There was little magic to it: once the nerves dissipated, the ball was pitched up and any movement with the Dukes proved a horrible source of discomfort for the men at the other end, a number of whom had spent the last couple of months attacking the less volatile white ball with brutish strength.

“They [England] were not hungover in the terms that they were still drunk, but the hangover from the World Cup was definitely evident. I’m sure a few of those guys might have wanted time off that week or perhaps saw that game as a little bit of an inconvenience. We could feed off that and we did; there were some rusty shots and players getting back in red-ball mode after a long World Cup campaign.

“I bowled nine or 10 overs in that opening spell, which in that heat was way more than I normally would have done. But I got on a roll and the ball was moving about, and those are the times you have to cash in as a bowler because there’ll be plenty of times when conditions aren’t in your favour. That first morning I was keen to get a couple of wickets under my belt and then it was a case of just carrying on and riding the wave.”

Jason Roy and Rory Burns nicked off, Jonny Bairstow was bowled and Chris Woakes was rapped on the pads, but that desperation to get on the Lord’s honours board meant wicket No.5 was the greatest source of elation.

“The first one [wicket] was special; the Bairstow one, with the ball nipping back and hitting the stumps, was nice. To get Moeen Ali, the fifth one, and get my name up on the board and be able to say that I’ve taken a five-wicket haul at a Test match at Lord’s was probably the most special. I was desperate to get five, slightly selfishly. I had my sights set on that and wasn’t going to let the captain take the ball out of my hands.” 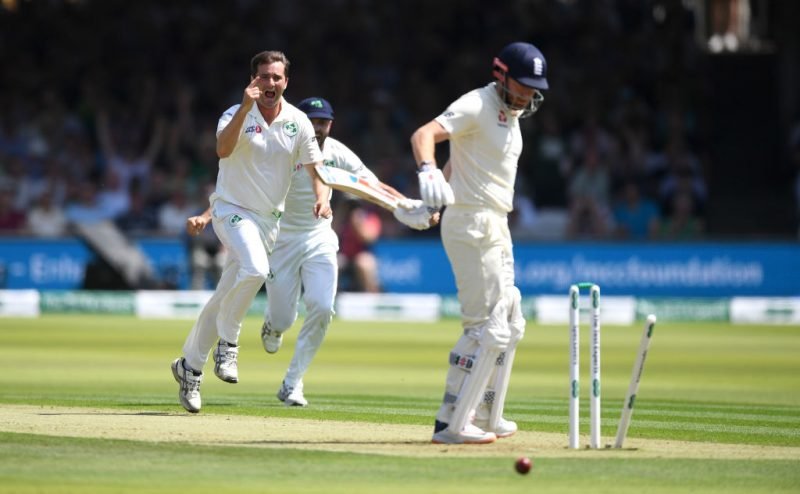 By the end of his spell, England were 58-7, the impressive Mark Adair having taken the other two wickets. Forty balls later they were all out for 85, with lunch yet to be served. Murtagh walked off to the applause of all those present and while Ireland were bowled out later the same day, a lead of 122 was still worthy of celebration, as was Murtagh’s five-for, the cheapest in the history of Test cricket at Lord’s.

“We went back to the hotel, all the girlfriends and partners were there, and we had two beers in the hotel bar. I thought that was quite important, to soak that moment in because it went so quickly and was quite quickly forgotten about afterwards as well.”

He wasn’t wrong. Two days later, Ireland were routed for 38, succumbing to a 143-run defeat, and more pertinently for Murtagh, the match marked the end of his international career – not that anyone knew at the time. With the ECB deeming Ireland cricketers as overseas players after the 2019 season, the 38-year-old was forced to pick between county and country. Last November there came the announcement of a two-year contract extension with Middlesex and retirement from Ireland duty. He was aware at the time of his Lord’s masterclass that it was possibly going to be his farewell too. 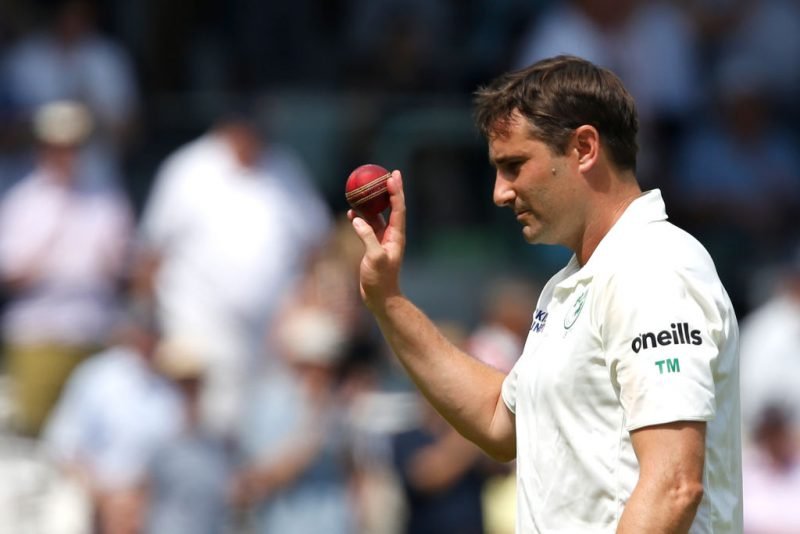 “I was hoping it wouldn’t be [his final match for Ireland]. I wanted to keep on playing for Middlesex and Ireland for as long as possible but knew the ruling had come in and it was going to take something monumental to change that. In the back of my mind I hoped that it wouldn’t be, but looking back it was a great game to bow out on, and to leave on your own terms is good in that respect.”

He kept his cards close to the chest in front of his teammates before time eventually came to make the tough call.

“I was still hoping there was going to be some loophole that allowed me to play for both [Middlesex and Ireland]. Nothing was said at the time, and I told them all at the end of the summer about the decision I’d made and they all pretty much understood it so that’s how that worked.

“A lot of people might have looked from the outside and thought, ‘It’s easy. He’s got a family settled in London and played for Middlesex for a long time…’ I loved every moment of being in an Ireland shirt and was made to feel very welcome and not like an outsider at all. It was difficult – it’s always difficult to finish playing international cricket at whatever stage of your career, whatever the reason. It was tough and it took me a while after I had made the decision to realise that I wasn’t actually going to play international cricket again. It was tougher than people perhaps realised.” 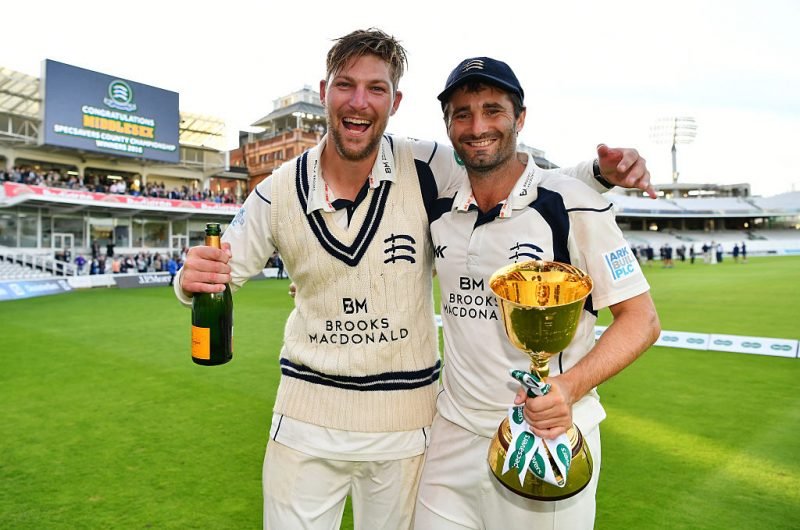 Regardless of the premature finish, it was an international career that proved to be accidentally legendary, prompted by a dinner conversation with his then Middlesex teammate and Ireland batsman Ed Joyce nearly a decade ago. The mention of Murtagh’s grandfather, born in Dublin, led to the realisation that the former England Under-19 international could play for Ireland, and the phone was ringing not too long after. “Someone from Cricket Ireland got in touch with me and asked whether I’d be interested in qualifying, and at that stage I’d given up on playing for England. Coming towards the end of my career, it was a bit of a no-brainer really.”

His debut followed against Australia in 2012, and six years later he bowled the first ball in Ireland’s maiden Test, against Pakistan. His figures in that innings, 4-45, are Ireland’s second-best in the format, with his mastery at Lord’s topping the pile. Ireland will have greater days going forward in Test cricket – a maiden victory still eludes them – but Murtagh’s legacy is assured as one their early heroes.

“I’ve still got a lot of affection for the guys there, and they’ve qualified for the [2020] T20 World Cup which is great so hopefully they can kick on to bigger things. 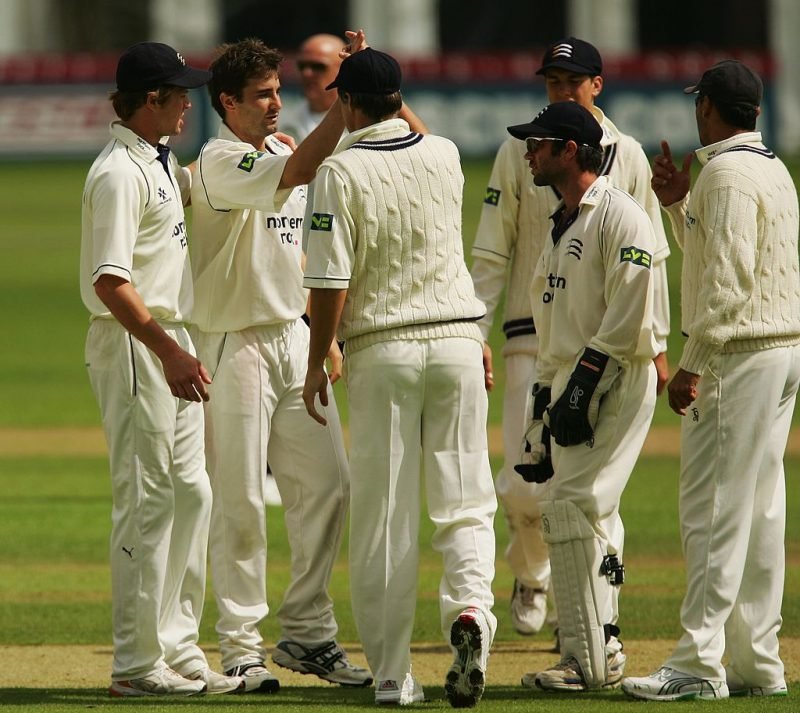 “Some youngsters have shown promise in those [Test] games, and there’s certainly the talent there. Hopefully they develop and I’m involved at some stage helping out where I can down the line.”

Preparations have begun for life after cricket, but there are still outside edges to be found on the county circuit.

“With all that’s happened this year, I wouldn’t want to finish this year. Hopefully we can get some cricket in this summer, and then I’ve got one more year left [on his Middlesex contract] next year.”

And a year on, how does he look back on his Ireland swansong?

“With nothing but pride and enjoyment. It was a great time having my family there to share in it and lots of friends watching the game in the crowd and on TV. If we’d won, it would have been bigger and better, obviously, but just the fact that I can look back and say that I played a Test match at Lord’s and got myself on the honours board is really special.”