Richard H Thomas weighs it up, assesses the various outcomes and… raises the finger as he lists down the 10 biggest calls by the umpires.

10. Not out and I’m staying indoors

Arthur Fagg was in charge when vandals wrecked the Headingley Test in 1975, when England routed India for 42 at Lord’s, and when a debut pair made Graham Gooch’s moustache even droopier. When England hosted the West Indies at Edgbaston in 1973 though, Fagg was AWOL. He refused a catch, and when the visitors disputed a decision rather too stridently, he refused to turn out for the third day. Warwickshire coach Alan Oakman stood in for the first over while Fagg was placated and he eventually returned. The batsman involved meanwhile, managed to avoid controversy his whole career: Boycott, G.

When Ashton Agar had Stuart Broad caught at slip at Trent Bridge in 2013, some suggested Aleem Dar gave it not out because there were two noises. TV reviews (not available to the Australians as they had used their quota) showed the two noises were fairly unambiguous – an edge almost off the middle and into the waiting mitts of Michael Clarke, via Brad Haddin’s thigh. The Aussies, suggested Barney Ronay, were never going to like Broad anyway – a “post-colonial sneer made flesh” and “handsome in an infuriatingly effete kind of way”. When, unembarrassed, he stayed put, he secured his place the following winter as the most unpopular English tourist since Jardine.

“I couldn’t believe it,” recalled Dickie about his final Test when England and India lined his route to the middle at Lord’s in 1996. “I just cried,” he gasped, “it was as simple as that.” As Bradman would have attested, moist eyes do not assist efficient performance. Not the case for Dickie; no sooner had Michael Atherton finished cheering, as Bruce Wilson reports, he “stopped being the England captain” and became “simply the carrier of a pair of pads standing between the ball and the wicket”. Rapped in front fourth ball, Dickie put the sentimental sobbing aside and mercilessly despatched him with that waggly old finger. 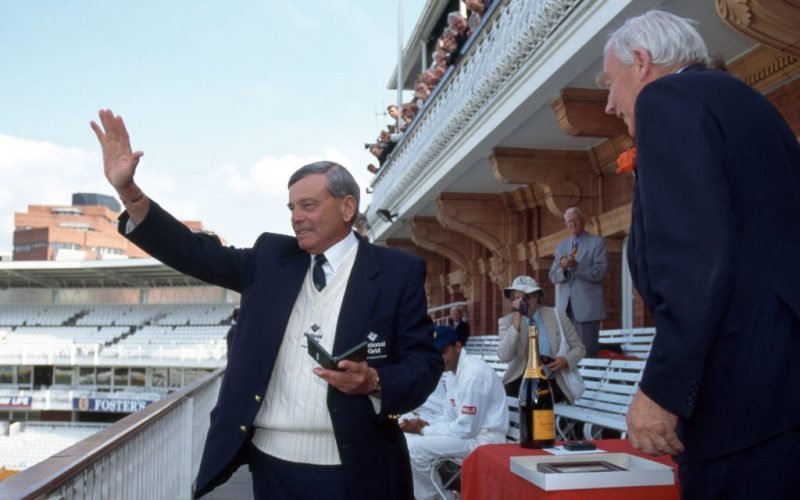 Dickie Bird waves to the crowd after receiving his umpire’s medal in his final Test at Lord’s, thus bringing an end to a 23-year-long umpiring career

First-class umpires are annually checked by an optometrist. Only 20/20 is good enough for Twenty20. Notwithstanding more rigorous checks than car drivers, the ECB’s policy is that however bright-eyed you are, at 65 you must retire. “At that age it’s not easy to stand for long games,” decided ECB umpire manager Chris Kelly, “the physical and mental pressures are greater.” George Sharp and Peter Willey challenged the ruling, referring the whole issue to a lofty fourth umpire – the law. “Umpire’s call” was the verdict – you’re both out. The ECB thanked Sharp and Willey “for their contribution” and wished them well in the retirement neither of them wanted.

6. Triggered by your teammate

When we’ve been sawn off ourselves, many of us don the white coat and exact vindictive revenge. Not something you’d expect in a Test match, but it happened to New South Welshman Tom Garrett at Melbourne in 1884/85. Heartily sick of England’s vociferous appealing, umpire George Hodges quit mid-match. Already dismissed, Garrett was summoned to officiate his own side, and – bizarrely – demonstrated a bowler’s preference when it came to decision-making. As Abhishek Mukherjee reports, “it may have been a coincidence, but wickets fell in a heap after tea”. England took the match by an innings and kept the Ashes. There are no reports of Garrett’s welcome when he returned to the home dressing room.

Following defeat to Pakistan at Lahore in 1987, England manager Micky Stewart wrote to his wife, “NINE of the 20 wickets were umpired out”; at least it’s a variance on “missing you and don’t forget the car insurance runs out on Tuesday”. In the next Test, when umpire Shakoor Rana took exception to the way Mike Gatting moved his fielders, the two famously and furiously wagged fingers at each other. “The language employed throughout the discourse was basic,” reported the Wisden Almanack, confirming what we’d all heard through the stump mic. A day’s play was lost, the row concluding only when Gatting apologised to his nemesis, who afterwards boasted that the whole thing had “made me famous”.

Hell knows no fury like a Sachin fan scorned, especially when the great man is playing his penultimate Test, on his specially arranged farewell lap of India. So Nigel Llong’s a brave man. In lolloped Shane Shillingford, with SRT on 10, to deliver his soon-to-be-banned doosra. It pitches on middle, goes past the outside edge and strikes Sachin on the back pad, pretty high. Up goes Llong’s finger and silence descends upon Eden Gardens. At the BCCI’s request, of course, DRS isn’t a thing, so off Sachin must trudge with the ball sailing over the stumps.

Ahead of Australia’s first Test against South Africa in 1963/64, there’d been murmurs about home quickie Ian Meckiff, whose left arm had “a permanent bend”, according to journalist Jack Pollard. However, when umpire Egar and Meckiff were seen in convivial conversation at a pre-match function, all seemed well. But Egar wrong-footed everyone, reflecting afterwards that he was “neither proud nor ashamed” for calling Meckiff for throwing three times in his first over. Thus began a war against chucking every bit as venomous as anything Senator McCarthy launched against communism.

There is some dispute about this, but it’s joyfully become part of Welsh folklore, and it would be nice if it really was true. Glamorgan’s first years in county cricket were challenging, despite the efforts of stalwarts including Dai Davies, who once hit a ball out of the ground and into a moving coal train which finally stopped 75 miles away. He was also described by Jack Hobbs as one of the very finest cover fielders. In 1948. Under the assertive stewardship of Wilfred Wooller, Glamorgan found themselves needing one more win for the championship, with only one more Hampshire wicket needed for a win by an innings and plenty. Dai was umpiring, and the story goes that when Johnnie Clay rapped the pads somewhere in front or thereabouts, gloriously releasing 25 years of frustration, Dai pulled the trigger and cried “That’s out and we’ve won the Championship!” 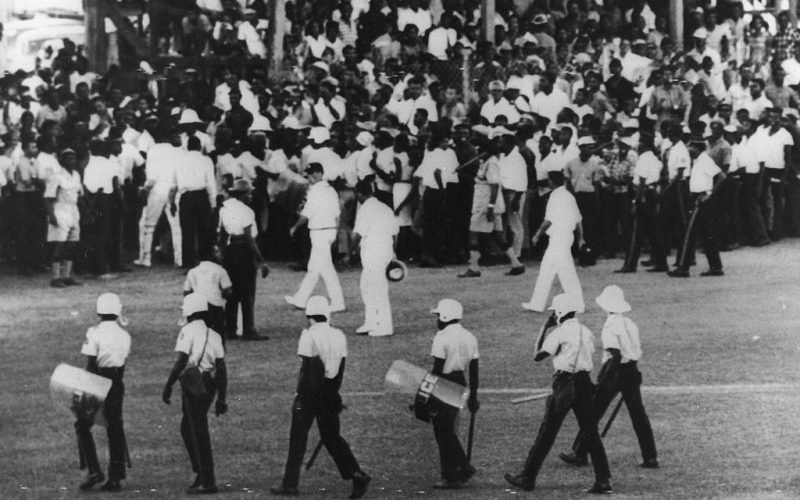 Basil Butcher’s dismissal triggered a riot at Kingston, circa 1968

Ian Chappell once hailed Jamaican Douglas Sang Hue as the “best umpire in the world” but trouble followed him around. In 1968 at Kingston, he correctly upheld England’s appeal to give Basil Butcher out caught behind. A riot ensued and when the wind changed, tear gas engulfed the press box and VIP area. Six years later, in Trinidad after some dead-ball confusion, Sang Hue gave Alvin Kallicharran out and once again, police had to restore calm. When Roy Fredericks was short of his ground attempting his 100th run on the same ground a couple of years later, discretion had the better part of valour. Sang Hue gave it not out, telling the horrified Pakistani fielders that: “You don’t have to live here”.