Graeme Hick, a man responsible for 64,000 professional runs, has lived with the ‘enigma’ tag for most of his adult life. Only now does it appear that he has attained some kind of closure, writes Jon Hotten in the Pinch Hitter.

The Gold Coast, a gaudy strip of fake marble hotels, theme parks and high-rise apartments south of Brisbane, is not a very Graeme Hick kind of place. So naturally he lives there, having left Worcester, which very much was a Graeme Hick kind of place, to take up an appointment as a cricket coach, coaching being, he once said, “probably the last thing I’d want to do”.

Hick is the breakout star of The Test, Amazon’s docu-series on Australian cricket’s attempts at resurrection under Justin Langer. Okay, star may be pushing it. Over the show’s eight episodes, an accumulated 421 minutes of television, much of which is set in hotel conference rooms – my word, they have a lot of meetings, the Australian cricket team – Graeme Hick utters not one single word. By episode two or three it is noticeable. By episode five it is funny. By the time you reach episodes seven and eight, it’s mesmeric, haunting.

Why won’t he say anything?

The Google search ‘Graeme Hick enigma’ returns 17,300 results. The first piece I click on, by the Guardian features writer Simon Hattenstone, describes him as, “a broad-shouldered, silent hulk”. The next is by David Foot: “Hick has never been much for showing his feelings. He is a dutifully courteous and laconic man.” The third comes from David Hopps: “His batting often seemed inexorable.” Kevin Mitchell: “A shy and sensitive man who happened to be simultaneously blessed and cursed with a gift for scoring runs almost without thinking.”

They become self-fulfilling. I’d imagine that if you read them about yourself often enough, 17,300 times perhaps, you feel their weight. Even if you ignore it, don’t look at it or think about it, you still know it’s there.

When Graeme Hick made his Test debut against West Indies at Headingley in June 1991, Brough Scott wrote of him: “The promise is so fresh, so infinite, there’s a touch of sadness about it.” Appropriately enough, it was D-Day. Hick had spent seven years serving a qualification period having been born in Zimbabwe, and as David Foot wrote: “The cricketing politics did not bother him a great deal.” Not much else seemed to either, certainly not the usual existential terrors of batting for a living. He sailed through, and went to the middle that day with 57 first-class hundreds to his name, including an innings of 405* for Worcester against Somerset that made the nine o’clock news. 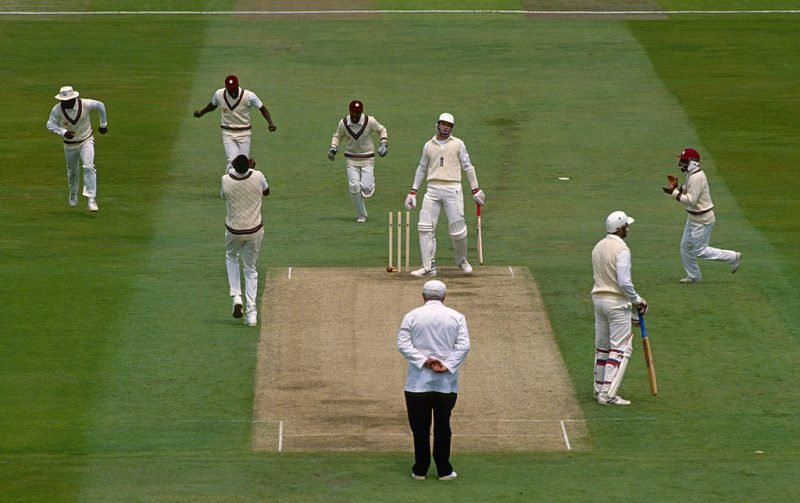 It was as if he crossed from one reality into another just by walking from the pavilion to the crease. This new reality was hostile, the sky low with heavy cloud, the light steel-grey. It had rained through the night. When Viv Richards won the toss, he was unsure of what to do and went back to the dressing room to consult with his team. Even after all of his years in England and with the latest quartet of terrifying pacemen at his disposal, he found it hard to bowl first on the opening day of a series, but finally he did. Patterson and Ambrose wore short-sleeve jumpers as they took the new ball.

After 20 minutes Patterson bowled Atherton with a quick, full delivery that caught him on the crease (“Beaten for pace,” Richie Benaud said solemnly. “Patterson has been fast this morning…”) and it began.

No one else managed more than 56 in the game. pic.twitter.com/CinvOpA6AN

Hick walked out, stared at the sky and examined the toe of his bat. His first runs came from a steer through third-man for four. The pitch seemed two-paced, either sluggish or rearing up alarmingly. Gooch whacked Marshall down the ground twice in an over and then an edge flew to Jeff Dujon. By now, the bowlers’ footmarks stood out on the pale wicket, dark and crumbling and full of moisture. Behind Dujon, yards back, were piles of sawdust. Courtney Walsh came on. Hick had been in for 48 minutes, faced 29 deliveries and added two singles to his early boundary. His feet were barely moving beyond the crease line. Richards noticed and brought in a silly mid-off. The next delivery was wider and seaming away, Hick tried to punch it through cover and nicked it.

“That adjustment to the field put the maggot of doubt into the mind of Graeme Hick,” said Tony Lewis.

He walked off quickly. Mark Ramprakash, making his debut, passed him on the outfield.

“The promise... so infinite there’s a touch of sadness about it”

Many years later, Mark Ramprakash sat at the top of the Lord’s pavilion on another grey and freezing afternoon and described what it had been like to bat that day at Headingley. “I remember facing Ambrose and Walsh early on and I was thinking, ‘I don’t know how I’m going to score a run here…’ I wasn’t used to that. The bowling was so tight, they gave you nothing. The fielding was brilliant. It was very, very difficult.”

Ramprakash made 27 in the first innings and 27 in the second. Hick got 6 and 6. Hick was dropped three Tests later, but made the winter tour to New Zealand. Ramprakash survived the series but didn’t make the tour. Their careers weren’t really connected but they seemed to be as they leapfrogged one another in and out of the team for the next decade. Hick was dropped and recalled 11 times, Ramprakash isn’t quite sure how often it happened to him, but together they came to represent something about English cricket in the 1990s, about lost opportunity and broken systems and even the national psyche. Most of all though, it was like Brough Scott wrote: “The promise… so infinite there’s a touch of sadness about it.”

Graeme Hick made his first century at the age of six, scored 82 not out in his debut first-class innings, became the youngest player to hit 2,000 runs in a season, was named one of Wisden’s five cricketers of the year, scored 1,000 runs in May, won the County Championship, made a quadruple century and had a first-class average of more than 60. In the two seasons before he qualified for England he piled up more than 4,000 runs.

And yet when he started in international cricket he said, “I would be standing at slip watching some other player batting wonderfully and I would think to myself, ‘I can’t do that.’…” He found the England dressing room, “a strange environment”. The head of selectors, Raymond Illingworth, told him he was soft. He admitted that he had cried at being informed of one of his de-selections. None of his six Test hundreds were as famous as the one he didn’t score, when Mike Atherton declared on him at Sydney in 1995. Hick had 98 and with a couple of minutes to go before the 3pm deadline had inexplicably dithered, blocking the final three balls of an over from Damien Fleming. 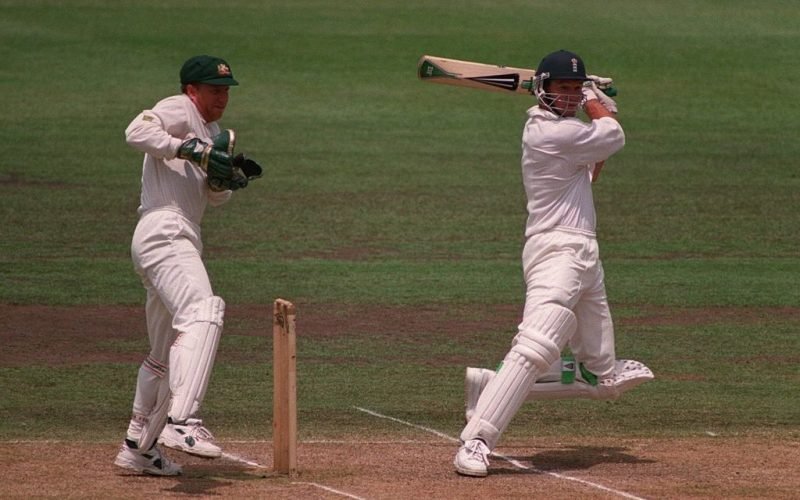 Hick had made 98 in the Sydney Ashes Test of 1995 when captain Mike Atherton declared. He never made an Ashes hundred

One irony among many was that he was finally having some luck. He’d been dropped on 8, given not out caught behind – to Shane Warne’s disbelief – when he had 33 and then, on 54, chopped a ball from Tim May hard onto his leg stump, somehow not dislodging a bail. He would never make an Ashes ton.

It’s said that Hick didn’t speak to the England coach, Keith Fletcher, for a month afterwards. He and Atherton somehow brokered an uneasy truce. In the summer of 1995, he averaged more than 50 against West Indies and then the following winter 48.83 in South Africa, but after that he went into a terminal decline and his career mark spiralled from a hair under 40 to a final 31.32. He was officially an enigma, one who played on until he was 42, making 64,000 runs in all cricket.

“The main thing I draw from my playing career is, ‘Be careful what you say and don’t say too much’...”

In our heads we condense time, make room for more, and there’s always more. The players of the past get hazy, distilled down to one or two reducible facets. Clever people call it the availability heuristic – human judgment usually relies on the most easily recalled piece of information.

After he scored 173 between lunch and tea for Northern Districts against Auckland in 1988, John Wright, who was coaching Auckland, called him, “a flat-track bully”. It was a throwaway line from a coach frustrated by a tough day’s cricket, but it stuck to Hick, became one of those easily recalled bits of information. It appears in lots of pieces like this one about him. When people think about Graeme Hick, it comes to mind. The enigma angle widens, because no one really understands how someone so apparently good could not do what they expected him to do in Test cricket. “I sometimes feel as though the article is written before a question is asked…” he said.

So Graeme Hick simply slipped away, an unobtrusive guest leaving a party. Sixty-four-thousand runs should be enough to sate anyone. He departed the game with no particular urge to carry on, so it was a delicious irony when he re-emerged, living in Queensland and working as Australia’s batting coach. He’d only moved there because his wife and kids had come out to watch him play in a beach cricket tournament and liked it so much they persuaded him to stay.

In 2018, he spoke to Steve James about his work as a coach: “The main thing I draw from my playing career is, ‘Be careful what you say and don’t say too much’…”

At that moment keeping quiet seems like quite a good idea, and so that’s what Graeme Hick does.

After three episodes of The Test, you start to understand why. The story begins in May 2018 with Justin Langer’s appointment, and the banning of Steve Smith, David Warner and Cameron Bancroft. Within a few months and a couple of hours of screen time, Australia have been beaten by England and Pakistan, and are in the process of being hammered at home by Virat Kohli’s India. Langer has gone from serene and slick new appointee bursting with ideas and hope to full David Brent, talking himself into the Double Think concept of “elite humility”, being “shocked” that the “Australian cricket team is so much about the individual…”

At that moment keeping quiet seems like quite a good idea, and so that’s what Graeme Hick does.

Brough Scott was right, there is a sadness attached to Hick, a universal one that we recognise because we feel it about ourselves. It’s about youth and opportunity and paths not taken, and a kind of nostalgia for something that never existed.

Graeme Hick doesn’t need to go there anymore. He told Simon Hattenstone that he’d seen a psychologist who’d said that if he wanted to move on he’d “first have to admit to someone close to him that he’d failed as a Test cricketer”. He did it, quietly, and his friend didn’t hear and carried on talking. But letting go was enough.

His silence in The Test is no doubt down to waivers and contracts and so on, but it about much more than that. It’s a kind of closure, and not for him – that happened a long time ago. No, the closure is for us, a polite but firm reminder that’s what’s done is done, and that Graeme Hick lives in the sun now.

Jon Hotten is a freelance writer, reviews editor of Wisden Cricket Monthly and the author of The Meaning of Cricket, among other published works. He runs the popular cricket blog theoldbatsman.blogspot.com