Daniel Brigham explores the rivalry between two of England cricket’s most important figures – Andrew Flintoff and Duncan Fletcher – one that, while not out there for the public to dissect and discuss, was ever-present, bubbling under the surface.

This is not a tale of fall-outs, of feuds or of punch-ups in Adelaide car parks. There are no threats of physical beatings, no broken f***en arms.

Instead this is a story of two of English cricket’s most important figures. A coach and a talisman; an enigma, a raconteur. Together they oversaw England’s greatest high and worst comedown. Together, Duncan Fletcher and Andrew Flintoff redefined cricket in England, one quietly, shrewdly; one loudly, brutally.

There’s was a brooding, slow-burner of a rivalry; that age-old conflict between men of reason and men of instinct. It’s there in the pages of their autobiographies. “As far as Duncan and I are concerned,” wrote Flintoff, “it was a case of two people who didn’t get on being thrown together for eight months of the year.” In 2013, this correspondent asked Flintoff whether he’d ever seen Fletcher smile: “You’re asking the wrong bloke here! He smiled in India, although it might have been wind, when we beat India at Mumbai [in 2006]. He jumped into my arms but he probably got the wrong bloke. I never really spoke about him but you have to give him credit for what he did. I think it was led by Michael Vaughan but Duncan played his part.”

And there’s the crux. The respect between the two was mutual. How could it not be? Flintoff was a match-winner. Fletcher turned England from a horrorshow of Maddy, Irani and Giddins into Ashes winners of Trescothick, Pietersen and Harmison. But the respect was often offered begrudgingly, loaded with caveats. Fletcher was too quiet, too insular, unable to relax. Flintoff was too unreliable, too insouciant, an ego that needed massaging.

There wasn’t always animosity, though. The fines, the pedalo, that all came later. Fletcher recognised Flintoff as special from the moment he took over as England coach. In his first Test in charge, the infamous Johannesburg obliteration of 1999, it was Flintoff, 21 and playing only his third Test, who top-scored with a forgotten but barbarous 38 that took England, weeping and wailing, to 122 all out. Fletcher then pushed for Flintoff’s selection on the tour of India in 2001/02 when others questioned his commitment to fitness. 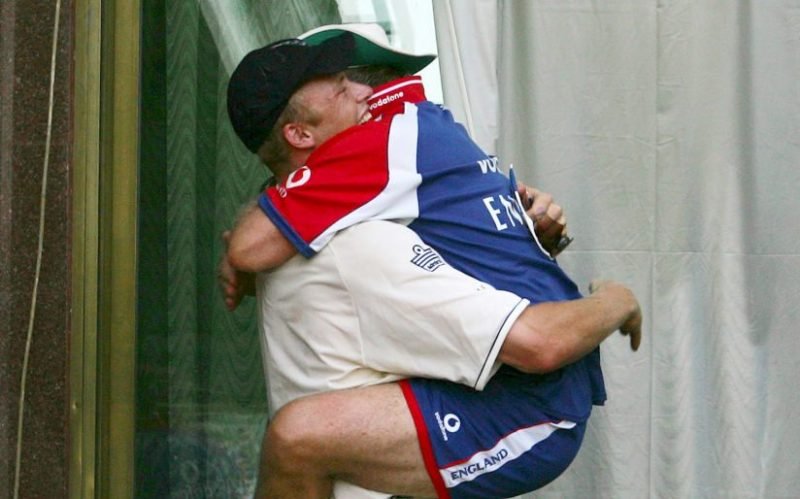 Despite the differences perhaps they had more in common than they thought. After all, it is unfair to paint Fletcher as a bore. He was no mood-hoover. Growing up in Zimbabwe, he wasn’t immune to escapades that Flintoff would have been proud of. He and his friends would provoke elephants to charge at them as a rather extreme game of chicken, while they also enjoyed leaping from stampeding horses onto haystacks. Even as England coach he took part in a fraught, chaotic rickshaw race between 11 tuk tuks and 22 players and staff while in Sri Lanka.

For a time they also had one big characteristic in common: loyalty. Which is why it was clear not all was right between Flintoff and Fletcher after the disastrous Adelaide Test in 2006/07. Coming under increasing criticism for picking Ashley Giles ahead of Monty Panesar, Fletcher told the media during a tense press conference, “I’m not the sole selector on this tour.” Fletcher had wanted Giles, yet here he was shifting the blame onto others – including his captain, Flintoff.

From Beefy and Viv to Sarwan and Gayle.https://t.co/ez5EWajlaD

It was only eight words but it was cryptic confirmation of what had long been suspected. The first signs of trouble had occurred ahead of the 2002/03 Ashes, when Flintoff failed to follow the necessary rehabilitation work after a hernia operation. Unfit, they took him to Australia but, after a heated exchange in a hotel room, a seething Fletcher sent him home.

Months later came the first of several fines. After being knocked out of the 2003 World Cup, in which England had been under immense off-field pressure because of the decision not to play in Zimbabwe, Flintoff and Harmison de-stressed with a boozy lunch. So boozy that, when the team were due to head off for an evening function, Flintoff wasn’t allowed on the team bus. He had also, for reasons lost to the haze of hops and barley, decided to attach Castle lager stickers to his forehead. Fletcher was told about it, ordered Flintoff to his room and found him still drunk (but shorn of the stickers).

Unusually, this man of reason went with his heart, fearing that not choosing Flintoff would prove disruptive

England’s rise, which coincided with Flintoff’s most consistent two years at international level, meant any tensions between the two were managed while the team was winning. They’d finally beaten West Indies, won seven successive Tests at home in 2004, knocked over South Africa away, taken down the ferocious Aussies, got themselves into Downing Street and onto the Weakest Link. Flintoff was one of the great all-rounders, Fletcher one of the great coaches. Life was peachy.

Then what happened? Hubris? Injuries? Fatigue? Whichever, England headed to Australia in 2006 without Michael Vaughan. Who to take over? Flintoff or Andrew Strauss? The media, the public, the Barmy Army wanted Fred, man of the people. Fletcher, normally decisive, ummed and ahhed. His brain said Strauss, his heart told him Flintoff. Unusually, this man of reason went with his heart, fearing that not choosing Flintoff would prove disruptive. 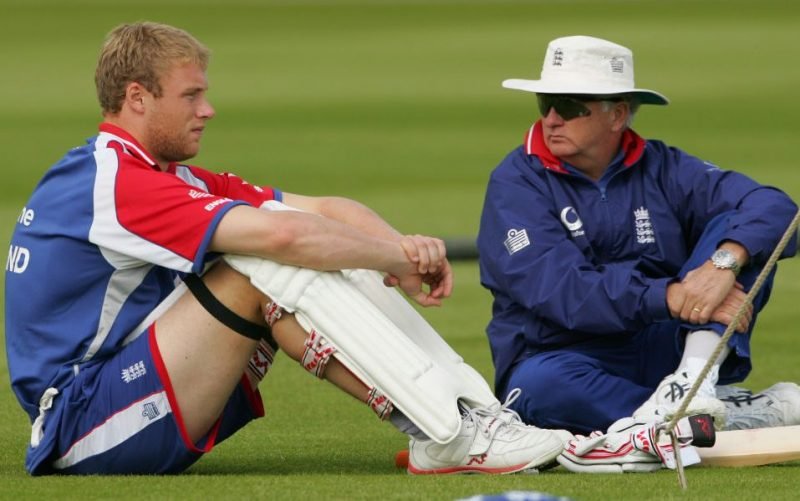 “The respect between the two was mutual. How could it not be?”

The decision was quickly regretted. Fletcher was disappointed Flintoff didn’t lead from the front. The aggression of 2005 was absent. He was also irritated that Fred and Harmy, the old double-act, drank in the Australian dressing room after the Adelaide defeat; but there was no comforting arm around the shoulder for his under-pressure captain.

So, perhaps, what happened during the following one-day series was inevitable. Flintoff, under the roguish wing of Ian Botham, indulged in a drinking session in Sydney between ODIs. He turned up for the morning training session unable to throw properly; catching became a game of hit and miss. Furious Fletcher came close to dropping him but instead buried the story, fearing the negative consequences for his team. Flintoff thanked him for his loyalty, but, again, there would be no arm around the shoulder in return.

It may have ended badly for Fletcher but, like Flintoff, ultimately he will always be remembered for 2005

The consequences had been shut down, but not the cause. And, so, three months later came Fredalo.

A defeat to New Zealand in England’s first World Cup match, a duck for Flintoff and a zero in his wickets column. A desperation to do well, a fear he was letting people down. A hotel room on his own that turned into a night out with teammates and staff that turned into commandeering a pedalo to find a boat he thought Botham might be on.

Fletcher wasn’t going to bury this story. There would be no covering for Flintoff in the media; instead he sat next to his captain at the confessional press conference and offered no words of encouragement. Thirty days later, tired, beaten and a little bitter, Fletcher resigned.

Related Story: Duncan Fletcher: England should have been No.1 in the world in the Nineties, easily

It may have ended badly for Fletcher but, like Flintoff, ultimately he will always be remembered for 2005. They’ll always have the celebrations at The Oval, when individuals were forgotten in the glow of team. That evening, with the urn thrillingly reclaimed, Fletcher went to bed at 10.30pm; Flintoff was still up at 8am when he spotted Mike Gatting coming down for breakfast and joined him, gin and tonic in hand, eyes reddened.