Rahul Dravid, despite being one of game’s all-time greats was always in control of his ego and always put his team first, writes Dave Fulton, his former Kent skipper.

I first met Rahul Dravid when in 2000 he walked into the Kent dressing room for the first time as our overseas player for the year. My first impressions were that here was just a very decent human being. Very easy to talk to, courteous, very dignified, with a quiet, statesmanlike way about him.

He had time for people. We had a tradition of great overseas players, but where Carl Hooper and Steve Waugh had a real aura around them, Dravid was quieter, much calmer, but with an aura nonetheless.

In terms of how he acquitted himself as a player, he was someone who really worked hard for the team and showed his flair when he needed to. I remember one innings at Bath against Somerset. Andy Caddick was at his best and the ball was rearing up off a length. Obviously he nicked me off both innings – 0 and 4 – and it was taking off from a ridge running across the pitch. Rahul got 90 in that game and it was one of the great innings I ever saw.

Many overseas pros there would have thought, ‘You know what? I’m hitting a quick 30 and getting out of here.’ Rahul got stuck in, used all his skill, his wrists, his touch, but a lot of heart as well. Everyone knows about his skill and touch, but you don’t score that amount of runs if you haven’t got a lot of ticker when you need to have it – and he had it in abundance.

The next week we played on a dustbowl at Portsmouth against Warne’s Hampshire. He made an unforgettable hundred there. For a county cricketer to be at the other end from Dravid – not that I was there for that long of course – and to see him doing battle with Warne, that was a privilege I’ll never forget. He was hitting things through mid-micket with a straight bat and we were watching it thinking, ‘How can you do that?’ This was a guy who had been brought up against spin bringing all his skill to bear against one of the greatest spinners of all time on a dusty one, and defying him.

There’s a reason they call him ‘The Wall’ 👏 pic.twitter.com/t8gyn9R9e6

With a lot of our overseas pros you didn’t want to bother them too much. He was always happy to share advice, but just like with Hooper, he was working on a different level to us and sometimes that made it difficult to pass things on. But you watch and try and take things from them nonetheless. Watching the way he hit Warne through mid-wicket that day was an education. Warne would be bowling around the wicket into the rough outside his leg-stump, and turning it back into the stumps on the angle, and Dravid would hit it with a straight bat, not closing the face – his theory being that you’re then hitting into the ball and effectively playing straight at the line. He made 137 from 252 all out, and we won the match.

Cricket’s a funny game. Dravid’s numbers stack up. And yet there’s a certain aesthetic element to greatness. He was known as ‘The Wall’, and had a reputation as a man who blocked it, perhaps a little dourly at times. That was unfair. If we look at the Indian team, with Tendulkar, Sehwag and Ganguly in there, he had a role to play in that team. To be a great player you have to have a certain element of self-centredness, but the thing about Rahul, he was always in control of his ego. He would play that role, scoring his runs at a certain tempo, for the good of the team. Team first, Rahul Dravid’s ego second. And that wouldn’t have been the case with some of the others.

Record when the match average is below 25

He could go through the gears. We saw it in one-day cricket for us, albeit at county level, that if he wanted to take someone apart, he could. But he recognised that if you’ve got five gears, to operate in third or fourth for most of the time means you’re playing percentage, results-driven cricket. He knew the limitations of his game but he could turn it on if he wanted to.

The only time he wasn’t impressive was a drinking session in Taunton after we’d lost in a couple of days. John Wright got the guitar out and started singing songs and Rahul was great for about an hour, but after a few shots was a complete disaster. For dancing and drinking, he knocks himself down a touch … 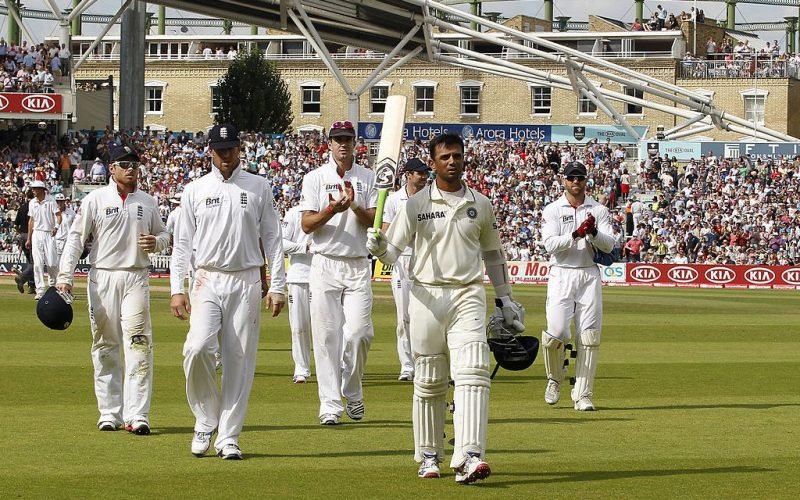 To English audiences at least, his defining series with the bat came in 2011 on India’s miserable tour over here. They lost four Test matches out of four but Rahul was immovable, making three centuries in the series. We talk about ego: he would have had a lot of pride at how he stood up to the England bowlers while others fell all around him.

It was also about technique. A lot of Indians will get criticised for only making runs on wickets conducive to wristy strokeplay. But of that crop, he had the best defensive technique, and that base enabled him to flourish in alien conditions, as he did throughout his career; his record away from India is outstanding. He knew where his off-stump was, he left the ball well, and again, that lack of ego enabled him to play like that, forcing the bowlers to bowl to him. Allied to that he had  superb cricket intelligence.

Andrew Strauss on the challenge of breaking down ‘The Wall’.

“The guys that we really struggled with when I was England captain were Mike Hussey and Rahul Dravid. So not the really big flamboyant players, we generally found a way of getting those guys out, but Hussey and Dravid were willing to play the patience game against us. Our strategy of wearing down opposition batsmen worked brilliantly against most people but Dravid almost ‘out-patienced’ us.

“Dravid’s performances against us in 2011 [461 runs at 76.83 in a 4-0 whitewash] didn’t surprise me because he was always a phenomenal player and probably out of all the Indian players he was the best suited to English conditions; the way his technique was and his ability to be really patient and he fact he didn’t look to dominate. He was in the autumn of his career and it was a fitting end for him in his last series in England. He won the battle.”

To bat for an afternoon, to entertain us all, I would go for Lara. How he could destroy you. Just watching that backswing was enough. And the way he would find gaps – I remember he played one shot against us at Edgbaston when he was in the middle of that incredible run for Warwickshire. We were the first team he didn’t get a hundred against, but I remember one shot he played against an Alan Igglesden bouncer. It looked like it was about to take his helmet off but he ended up, at the last second, ducking out of the way and with those extraordinary hands, ramping it over the keeper for four.

But to bat for my life, it’s Dravid every time. Kallis would be a close second, but you don’t get called ‘The Wall’ for nothing. And I’m not keen on dying.