From moppers to rioters, Kit Harris brings us the best and worst crowd interventions in the third issue of the Pinch Hitter.

Basil D’Oliveira wasn’t the only hero of Kennington in the final Test of the ’68 Ashes; there were hundreds. His 158 set England up, but they needed eight Australian wickets on the final day to tie the series. Thunderstorms were forecast, but Derek Underwood spun his irresistible web and the visitors were 65-5 at lunch. Then the downpours came, flooding the outfield, and when the umpires made an inspection at 4.15pm, the situation looked hopeless. The spectators were not to be denied, though, and got to work with whatever mops, towels and sawdust they could find. Within 30 minutes the ground was playable. Underwood took 7-50, including the final wicket with just six minutes of play remaining, to square the series 1-1.

“This stunning image freezes forever the moment of the final wicket.”

From the archives, Ed Kemp reminisces the frame that captures the moment England clinched a remarkable win in the Oval Test of 1968.https://t.co/nxdxUqIOKk

It’s hard to remember a time when Hansie Cronje wanted to win above all else, but in January 1996 he was desperate to lead South Africa to victory in their first home series against England for 31 years. It was 0-0 going into the final game and England, setting a target, were 140-6, just 49 ahead. Only Graham Thorpe stood in the Proteas’ way. He attempted to pinch a single but was beaten by Andrew Hudson’s throw. Cronje’s disappointment when umpire Dave Orchard declined the appeal turned to defiance when the crowd watched the replay and bellowed their disapproval. The South African skipper repeatedly demanded a review and eventually got it. The decision was overturned and the hosts surged to a historic victory.

“Is there an Irish cricketer in the house?”

Ireland’s 2001 ICC Trophy campaign was disastrous. They were nailed to the bottom of the league table, having lost to Denmark, Scotland, the UAE and the Netherlands. Several players were injured; Ken Rutherford, the coach, had a blazing row with batsman Decker Curry about his position in the batting order and sent him home. The nadir came against the Netherlands when, with only 10 fit players, Rutherford had to beg the crowd, “Is there an Irish cricketer in the house?” Thus came James Fitzgerald into Irish sporting folklore. A Dublin club cricketer with a batting average of 16.89, he ambled gamely around the field, thereby fulfilling every half-fit spectator’s dream. He later moved to Canada permanently, and is now press officer for the World Anti-Doping Agency.

We’ve all seen the captain beseeching the umpire to change the ball when it isn’t doing much. For all the good it does, they may as well ask the groundsman’s dog. Once, though, man’s best friend really did help out. After taking a first-innings lead of 210, Surrey were struggling to bowl Yorkshire out again, Michael Lumb’s 124 putting the visitors 203 ahead on a wearing pitch, with four wickets in hand. Yorkshire keeper Richard Blakey had chipped in with 50 when he tonked the ball into a marquee, where it was set upon by Bumper, a labrador belonging to the Times’ cricket correspondent. When the ball was retrieved from the canine’s canines, it was beyond salvation. The replacement ball did all sorts, skittling Yorkshire’s lower order, and giving Surrey a chaseable target and enough time to reach it.

A Hampshire member leapt from his seat, pronounced himself ‘The Honeyman’ and removed the offending insects

‘Bees stopped play’ is a fairly rare occurrence. During last year’s World Cup, a swarm halted South Africa’s match against Sri Lanka at Chester-le-Street. The same thing had happened – to the same teams – at Johannesburg in 2017. On that occasion, a local beekeeper who was watching the game on television came to the rescue after play had been suspended for an hour. In this county match, the saviour was closer to home. Leicestershire had made 428 and Hampshire were fighting to avoid the follow-on when the bees came. As the players dived for cover, a Hampshire member leapt from his seat, pronounced himself ‘The Honeyman’ and removed the offending insects. His team were not grateful for long: they went on to lose by an innings.

The Riot of Sydney began when the English team appointed inexperienced 22-year-old George Coulthard as ‘their’ umpire. Bookmakers were offering attractive odds against England winning, so when the Sydney Morning Herald accused Coulthard of wrongly rejecting an appeal against Lord Harris on the first day, there was resentment that the tourists had secured a 90-run first-innings lead. On day two, Coulthard dubiously adjudged the hosts’ star batsman Billy Murdoch run out, whereupon New South Wales demanded a change of umpire (it didn’t help that Coulthard was from Melbourne). The English refused, and 2,000 spectators rioted, beating Coulthard and attacking the England players. The Herald later pleaded mitigation, claiming that an English player had made “a grossly insulting remark about the crowd being nothing but sons of convicts”.

“Such outbursts of ruffianism must not be pandered to”

If you think the overnight vandalism to the 1975 Headingley pitch by the George Davis protesters was extraordinary, you ain’t heard nothing yet. Worse was once done at Lord’s by the MCC members themselves. Lancashire had started steadily, but after 25 overs the rain came. A hundred years ago, Lord’s was infamous for its poor drainage, and the pitch was unplayable on day two. The spectators demanded a refund. When it wasn’t forthcoming, they descended on the pitch and tore it to pieces. “The waiting in the pavilion is wearisome in the extreme,” accepted Truth magazine, adding that “encouragement has been given by the so-called Yellow Press in its search for notoriety and sensation” and concluding that “such outbursts of ruffianism must not be pandered to”.

The fires of Eden

Remember that amazing World Cup semi-final when Vinod Kambli scored an unbeaten 120 and put on 132 in 16 overs with Anil Kumble to conjure a miracle win for India? No, you don’t, because the spectators set fire to the stadium when their team was 120-8. Mohammad Azharuddin was so terrified of his opponents’ superb record when chasing that he chose to bat second on a pitch which everyone knew would become a spinners’ paradise. Sure enough it did, India’s pursuit of 252 capitulating from 98-1 as the Sri Lankan slow-bowling quartet combined for figures of 23.1-1-68-6. It could have been worse, but the Indian fans had seen enough. As Eden Gardens burned, the match was awarded to Sri Lanka.

The crowd had already got it wrong once. Australia, chasing a target of 174 in an ODI, scored a single from the final ball of the penultimate over to reach 168. Thinking the match was won, the spectators poured onto the field, grabbing the stumps with glee. When they’d been sent back, Keith Arthurton bowled the final over to Steve Waugh: two runs from the first, and then – astonishingly – four dots. Waugh’s clumsy last-ball pull yielded just two and the fans overran the ground again, but as they seized the stumps, Waugh seized the initiative. The ball was not yet dead. Dodging the invaders, he called Shane Warne through for a third run to tie the game, while the helpless West Indies fielders watched the stumps and bails disappear in a sea of misplaced jubilation. 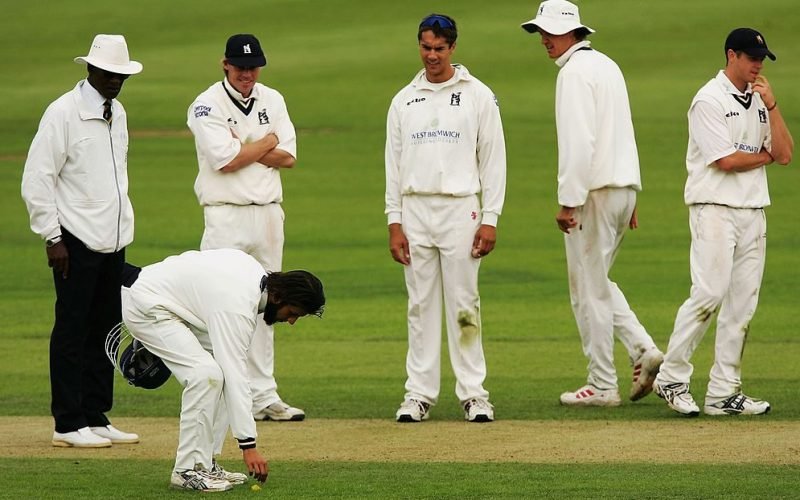 Moeen Ali picks up a bit of a water bomb that hit the wicket at Stanley Park, Blackpool

Nobody knew exactly where it had come from, but the water-filled condom that nearly hit Lancashire’s Ian Sutcliffe during his first-day century landed with such accuracy that Wisden later pondered whether some of the fielders might envy the arm which had thrown it. On the third day, it happened again, and this time it was Murali Kartik – the home team’s overseas player – who narrowly missed a soaking. The fielder nearest to the origin of the missile, Mal Loye, thought he had the culprits in sight and gave chase, scaling the wall of the ground and dashing into Stanley Park. Play was suspended as the groundsmen dried the sodden pitch with bar towels, and four teenagers were spotted cycling away in the direction of Blackpool Zoo.

Kit Harris is secretary of the Icelandic Cricket Association and is Iceland’s only cricket writer and broadcaster.