Rohit Sharma has talent, and that has never been in doubt. He is already a limited-overs legend; there have been eight ODI double-centuries in all, and Rohit has three of them, the most among double-centurions. He also has scored four centuries in T20Is, the most by any batsman.

However, for all his short-form success, he is yet to truly crack Test cricket. Ahead of India’s three-match Test series against South Africa, where Rohit is touted to open the innings, we look at his career in whites.

The spotlight was elsewhere when Rohit made his Test debut against West Indies in 2013. The series was Sachin Tendulkar’s last in the sport, and it was labelled Sachin’s Farewell. Rohit made a dream start, hitting 177 on debut in Kolkata. It remains his highest Test score to date. He followed it up with an unbeaten 111 in his second game in Mumbai. Unfortunately for Rohit, he hasn’t hit those highs since.

Having started as well as he could at home, Rohit had a string of tricky overseas Tests to navigate. He didn’t do too well. A tough 2013 series in South Africa with numerous low scores was followed by an improved performance in the tour of New Zealand in early 2014. He posted 72 in India’s first innings in Auckland, when the next best score was 30, but a disappointing series overall led to him being dropped. 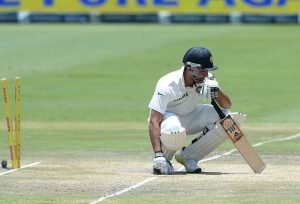 In and out of the side

Next up, midway through 2014, was a series in England. Rohit played only one match of the five-Test series, though, with England winning 3-1. He started more in the winter tour of Australia later that year, and scored a half-century, but again struggled for consistency.

In Sri Lanka in 2015, his 202 runs was the second highest by an Indian batsman as India won 2-1. There were two half-centuries, but he never top-scored for his side in an innings. Five Indian batsmen scored hundreds, and not being one of them may have hurt his reputation.

The victorious tour of Sri Lanka sparked a run of nine Test series wins for India, but Rohit’s Test career stalled in the following home series against South Africa. He managed just 26 runs in four innings on rank turners, and was promptly dropped. He didn’t fare much better the following summer in the West Indies, where he played two of the four Tests, but only batted in one. 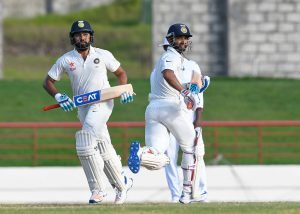 Rohit enjoyed a fruitful home series against New Zealand in 2016. He scored 238 runs at an average of 79.33 across three Tests. Only Wriddhiman Saha, the wicketkeeper-batsman, had a higher average, and he had some fortune to thank for that. However, Rohit still didn’t score a century, and the doubts lingered.

Later that year, India were to play England. But Rohit was dealt a blow as a thigh injury ruled him out of the series, at a time when he seemed certain to play a part had he been fully fit. India went on to smash England 4-0, and it seemed an opportunity lost for Rohit to seal his place in the side.

Rohit remained out of the Test side for over a year. He was eventually called up for a home series against Sri Lanka in 2017. And in his first Test back, in the second match of the series, he finally scored his third Test century. He played three innings in those last two matches, and scored at least a fifty in all three.

After doing so well against Sri Lanka, Rohit came tumbling back down to earth in South Africa, early in 2018, when a challenging pace attack proved too much for him once again. He was dropped after two Tests, having scored only 78 runs in four innings.

Rohit returned to the side against Australia at the end of 2018, having missed three Test series, including a five-match series in England. He made his comeback in Australia, as India became the first Asian side to defeat Australia in Australia.

A modest accumulation of runs proved disappointing again, but he did manage one score above fifty – his 63 not out at the MCG was crucial in India’s eventual victory, but he missed the Sydney Test on paternity leave. 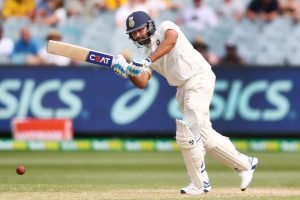 Having missed India’s 2-0 win in the Caribbean last month, Rohit has been recalled again to face South Africa. He is set to open, having never done so in Tests before, and it is considered a prime opportunity for him to cement his place in the side.

India have plenty of overseas Tests coming up. Rohit may have only played nine of his 27 Tests at home, but in those nine matches, Rohit averages 85.44 compared with 26.32 outside India. To have any chance of a long term place in the side, he surely must perform against South Africa.