From the conclusion of the last World T20 until the start of 2019, Pakistan bossed the shortest format. They won 11 consecutive series, including home and away against the world champions, to firmly establish themselves as the best side on the planet and favourites for the T20 World Cup 2020. One year, eight losses out of nine, and four series defeats out of four later, their prospects for that tournament lie in ruins, and they remain world No.1s in ranking only.

Their latest defeat, by 10 wickets and with eight overs remaining, would have counted as an almighty shock before this year. Now, it’s merely symbolic of their sudden, total crash in form. Their 3-0 defeat against a depleted Sri Lanka side, at home, was more worrying still.

What a performance from Australia!

They beat Pakistan by 10 wickets to seal a 2-0 series victory ?#AUSvPAK pic.twitter.com/wljtRg9F2N

However, while Pakistan’s collapse has been complete and collective, it is possible to identify a few key areas that have led to their struggles.

An over-reliance on Babar Azam

It’s not exactly a revelation that Babar Azam is very good at T20I batting. He has long been thought capable of joining the ranks of Pakistan’s greatest batsmen, and it is in T20 cricket in which he has most firmly established himself as among the world’s best; for batsmen with more than 500 runs in T20Is, his average of 50.17 is the best of anyone in the world. Having made his debut in Pakistan’s first game after the 2016 World T20, he has been right at the heart of their incredible run – in that time, no one worldwide has made more than his 1405 runs.

However, while Babar’s form has dipped slightly – he averages 41.55 this year compared to 54.26 up until 2019 – the real worry is the almost total lack of support he has received in the last 12 months. While during Pakistan’s winning streak, the likes of Shoaib Malik and Fakhar Zaman and to a lesser extent Sarfaraz Ahmed, Ahmed Shehzad and Mohammad Hafeez all chipped in with consistent returns, in 2019 no one has even close to half Babar’s tally of 374 runs.

The form of Fakhar, once Pakistan’s sparkling new sensation after his explosive heroics in the Champions Trophy 2017, has been non-existent in 2019. In eight matches, the opener has scored only 50 runs at 6.25. 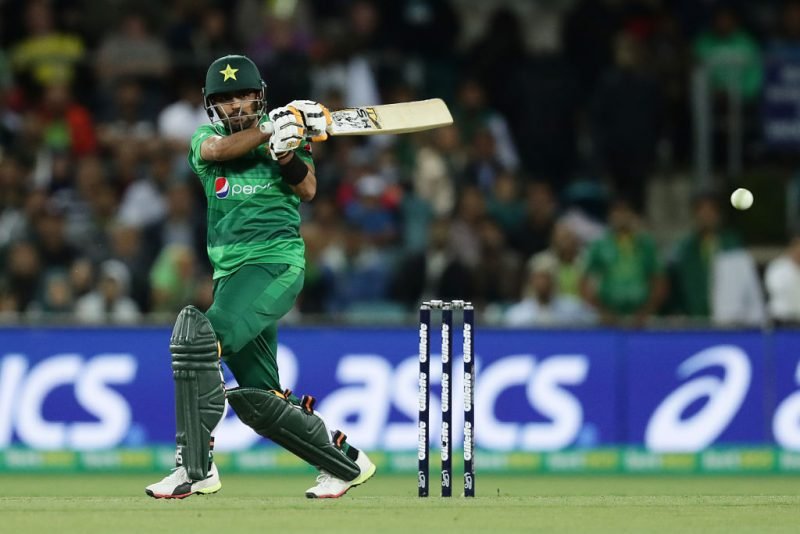 Babar Azam has stamped his mark in the shortest format in 2019, but his colleagues have not quite been in the same league

Asif Ali and Mohammad Rizwan, drafted in as big hitters, have also failed to fulfil their brief so far, with Asif scoring only 94 runs from nine innings at a strike-rate of 108.04, and Rizwan’s 74 runs from six innings coming at under a run a ball.

It is revealing that Imad Wasim, Pakistan’s third-highest run-getter for the year, has averaged a paltry 13.44 while scoring his 121 runs, while the player above him in the charts, Iftikhar Ahmed, is the only batsman other than Babar who will look back on 2019 fondly, with 150 runs coming at a strike-rate of 144.23 and an average of 75.

It’s a tricky challenge for any team to negotiate, transitioning from one generation of players to another and knowing when to cut ties with an ageing player, whether due to diminishing returns or because they have falling out of step with a changing world. But in jettisoning Shoaib Malik and Mohammad Hafeez, each of whom have averaged in excess of 40 since the 2016 World T20, Pakistan have made a mistake. Shoaib’s record, striking at 151.45 in that time, is unequivocally excellent, and while Hafeez was hardly the explosive type, he fitted the game plan of making sure Pakistan achieved a total they had a chance of defending before allowing the bowlers to get to work. With both being nearer 40 than 35 in age, they might well have called it a day after next year’s global tournament, but that doesn’t mean they couldn’t have served their country well during it.

Sarfaraz Ahmed has been removed as Pakistan captain. Azhar Ali will take over in Test cricket, while Babar Azam will lead in T20Is. They have yet to decide on an ODI skipper. pic.twitter.com/XjrZx9iqBd

The case of former skipper Sarfaraz Ahmed is slightly different. Even if the decision to hand the leadership reins over to Babar had its merits, and even though his recent form has been less than stellar, it would have been worth testing whether being relieved from captaincy enabled him to rediscover his flair as a batsman. He could also have offered a guiding hand for Babar in his new role. At 32, it’s not inconceivable his best days could yet be to come.

It’s easy enough to quibble with the individual axings. Combined, leaving behind an experience vacuum, it’s harder still to justify.

Related Story: Marks out of 10: Player ratings for Pakistan after 3-0 ODI series win over West Indies

The Pakistan Cricket Board’s decision to move on from previous head coach Mickey Arthur is reasonable enough. The team failed to progress past the group stage in this summer’s Cricket World Cup, and having lost to New Zealand 2-1 in UAE in 2018 and then 2-0 to South Africa at the start of 2019, the Test team wasn’t faring too well either. At the beginning of both a new four-year World Cup cycle and the inaugural World Test Championship, the timing of the decision made sense too.

A very disappointed Mickey Arthur on losing the Pakistan job.

But adjusting to a new coach can be challenging and Pakistan’s fortunes in the format Arthur had brought success in have taken a hit. Defeats in South Africa and England looked like a blip. Their shock defeat to Sri Lanka and the poor showing in Australia are more worrying, and they’ve come under new coach Misbah-ul-Haq’s tenure. With the T20 World Cup less than a year away, time is running out for Misbah to get his new team dancing to his tune.

As brilliant as Babar has been, Pakistan’s success has been based on their bowlers. Among Full Members, their run rate of 8.04 since the last World T20 is ahead of only West Indies among teams who will be entering the main draw at next year’s tournament, with Pakistan opting for a strategy of safety with the bat and constriction with the ball. Key to this has been their spin pair of Imad Wasim and Shadab Khan, with the former conceding less than a run a ball since the last World T20, and the latter’s 46 wickets behind only Yuzvendra Chahal and Rashid Khan in that time.

That Shadab has six Player of the Match awards in the same time period, second only to Afghanistan’s Mohammad Nabi, shows his match-winning value to Pakistan. But this year he has picked up only four wickets at 56.75 while conceding runs at 8.73 an over. There is little doubt he can come again. Aged just 21, a poor spell was bound to come along at some point, and, ranked inside the top five of the ICC’s T20I bowling rankings, he has plenty of credit in the bank. It is a mark of his prodigy how much Pakistan have come to rely on him at such a young age. But rely on him they do, and, this year, his struggles have coincided with his team’s.