Ishant Sharma’s story has been a turbulent one, but after much mockery the boy who bested Ponting at 19 is writing a redemptive final act, says Jon Hotten.

Ishant Sharma was born in 1988. The Indian cricket team began that year by playing West Indies in Chennai, the final game of a four-Test series. Opening the bowling for West Indies were Patrick Patterson and Courtney Walsh. Opening the bowling for India were Kapil Dev and Mohinder Amarnath. India won by 255 runs. Kapil sent down 11 overs in the match, Amarnath, in what was his 69th and last Test, just five.

Mohinder Amarnath took 32 wickets in his Test career and was really a batsman, but that didn’t matter, because India was no place for fast bowlers. Kapil was simply the exception that proved the rule. Any cricket-mad parent would wish first that their kid was a batter, second that they were a spinner, thirdly, and impossibly, that they may be as good as Kapil. A fast bowler… Well in India, that was a calling of a different, far harsher kind…

At 19, Ishant roughed up one of the greats

When Ishant Sharma made his Test match debut in 2007, only four Indian fast bowlers had ever taken more than 100 Test wickets: Kapil, Karsan Ghavri, Javagal Srinath and Zaheer Khan, and of those, only Zaheer was still playing. At Perth in January 2008, Ishant Sharma, 19 years old and running in like Peter Crouch trying to beat the offside trap, did something extraordinary. During the second innings he bowled a spell at Ricky Ponting that lives in the memory of all that saw it, lightning-quick and with hurtful bounce, he barked the knuckles of the great number three, speared his head backwards on his neck, had him kicking at the crease-line open-eyed and rattled during eight overs that one reporter called: “as good as anything seen from a visiting fast bowler in a decade”. Almost out on his feet, Sehwag urged him to bowl a ninth, and in it Ponting nicked to Dravid. India won. A star was born.

But it was just the fourth Test match for this nascent star. Ishant Sharma – gauche, gummy, rail-thin, accident-prone – had many miles still to travel. On dead pitches and in white-ball shoot-outs, he lost first his pace, then his confidence. When it happened, he stood out for the wrong reasons, too tall, too lanky, hidden in the field, lost at the bowling crease. His first 50 wickets cost him 31.76. By the time he had 75, it was 37.40. 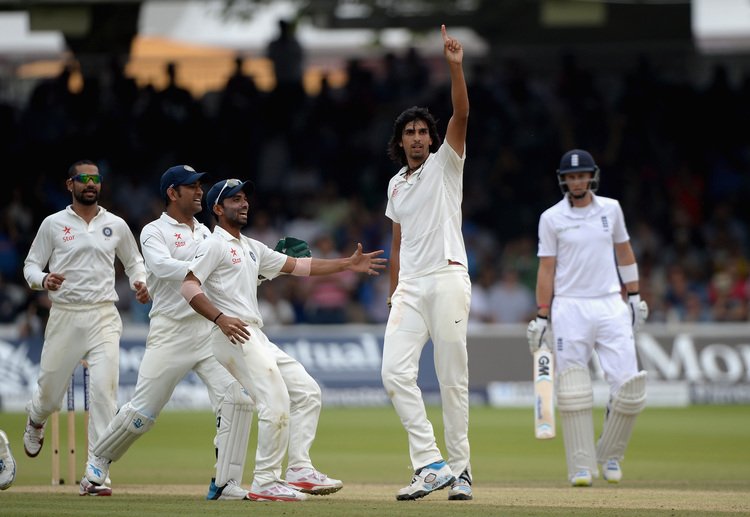 Sharma bounced England out at Lord’s in 2014

He came to Lord’s in 2014 with 174, behind only Kapil, Srinath and Zaheer, the average still over 37, and bounced England out in one mad and glorious afternoon. With the old ball he produced what David Hopps called “one of the most memorable spells in the history of Indian fast bowling,” a careening rocket ride either side of lunch that brought India their first overseas Test win for more than three years, and only their second ever at Lord’s.

Hopps went on: “India… will have eyes only for the performance of Ishant, who returned career-best figures of 7 for 74 and invited comparisons with the brilliant spell in Perth in 2008 when he roughed up no less a player of fast bowling than Ricky Ponting and encouraged India’s hopes that they had a great fast bowler to reckon with. Ishant’s career has never quite turned out like that…” 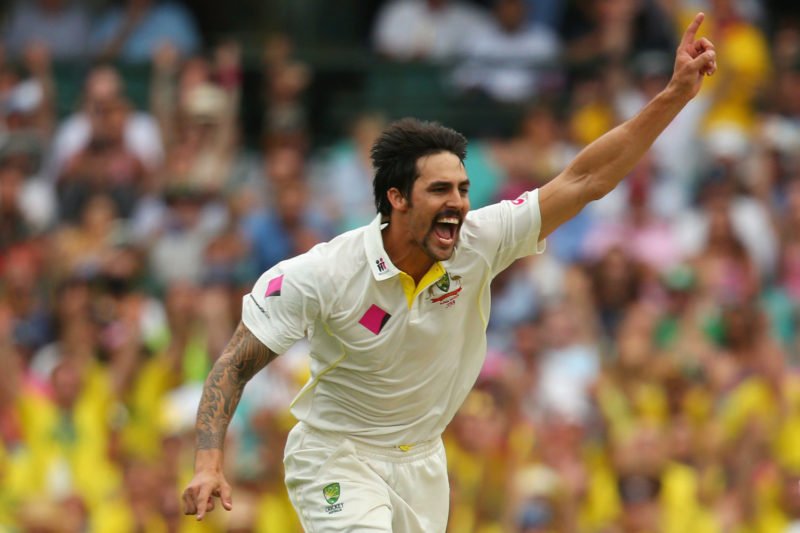 Ten months after Ishant had bowled that spell at Perth, Mitchell Johnson debuted for Australia against Sri Lanka. And the winter before Ishant destroyed England at Lord’s, Mitchell Johnson had destroyed England in Australia. Johnson, who shared Ishant’s capacity for haplessness as well as brilliance, had the classic, redemptive career arc, a three-act structure beloved of all scriptwriters: early promise, then rocky road, followed by last-reel, feel-good fulfilment.

In the week that Mitch hung them up for good, Ishant came to Trent Bridge with India needing something, anything, from a player other than Virat Kohli. They got it, too. England resumed their second innings miles behind but with their openers intact as the fourth day began. By inducing edges from first Jennings and then Cook, Ishant kicked open the door.

Mitch and Ishant are at the whim of the fates too, subject to a muse and rhythm that descends when it feels like it, rather than when we all think it should

On the radio, Jonathan Agnew said of him: “He’s not quite a one-trick pony, that would be harsh…” It was a backhanded compliment and you knew what he meant. Everyone understood how Ishant would bowl to England’s left-handers, including Alastair Cook, who Ishant had dismissed 10 times. Stopping him was another matter, and that is a hallmark of quality.

We invest great hopes and dreams in fast bowlers, yet even the real bruisers like Ryan Harris and Pat Cummins are physically fragile, always at the limits of what their bodies can do. Many of them, like Mitch and Ishant, are at the whim of the fates too, subject to a muse and rhythm that descends when it feels like it, rather than when we all think it should.

Things have changed for Ishant and for India. On TV commentary, Michael Holding noted that pitches for domestic competition there have become more conducive to fast bowling (well, it would have been hard for them to become less conducive…) and around Ishant were Jasprit Bumrah bowling in-slanting rockets for his first Test five-for, and Mohammed Shami with his reverse-swing touching 90mph. They have another swing bowling, hard-hitting all-rounder on the books, too, and plenty more where they came from.

Ishant has walked the bridge between then and now, and at times it has been a treacherous one to cross. The average is down to 35.16, and he has 249 wickets, behind only Zaheer and Kapil on the list. He has served his calling the best he can. He may not get Mitchell Johnson’s final-act finish, but Ishant Sharma keeps running in.