In and out of the side due to the surplus of other options, Shreyas Iyer’s first innings at No.4 suggested he could be the long-term, first-choice solution to India’s problem position, writes Roshan Gede.

The discussion over India’s No.4 position reached its peak during the 2019 World Cup, with Virat Kohli’s side churning through four different candidates, none of whom made a half-century, as they stumbled to a semi-final exit but it’s hardly gone away since. Indeed, MS Dhoni’s absence since and eventual retirement might widen the void further. Shreyas Iyer, in his first innings at second drop, showed that he might just have what it takes to provide a long-term solution.

From the positions either side, Iyer has built up quite a portfolio. When Rohit Sharma notched up his third ODI double ton against Sri Lanka in 2017, Iyer watched the carnage unfold from the other end and cashed in himself, walking off with a 70-ball 88. When the opportunity presented itself for a bigger impact, in a rain curtailed run-chase in West Indies in a series decider earlier this year, Iyer stroked 65 off 41 in a game-defining partnership with Virat Kohli.

After five half-centuries in his first eight innings, is today the day he tons up?#INDvWI pic.twitter.com/Z2YFmCHcXb

But at Chennai, he showed that he can play the role of the steady, senior statesman as well as that of the punchy youngster. The situation called for patience. The right-hander walked in at the fall of skipper Kohli with the score reading 25-2 in the seventh over, and the pitch was on the slower side. He and Rohit rebuilt, but when the latter fell for 36 in the 19th over, India were in a desperate need of stability. Iyer dropped anchor, and by the time he was dismissed for 70, India looked well on course to finish with a par score.

"I feel it's a really good achievement for me. I would look to continue with the good form."

Just as encouraging as Iyer’s own knock was how Rishabh Pant flourished alongside him. Iyer captains Pant at Delhi Capitals in the Indian Premier League, and perhaps it was this that helped him feel he could give his partner some friendly advice, though he is less experienced at the top level.

“I feel it’s a really good achievement for me,” he said at the mid-match break. “I would look to continue with the good form. Me and Rishabh really constructed this partnership well. Rishabh is a kind of a batsman who can change the momentum of the game and that’s what he did today. I told him to hit straight. He listened to me and delivered really well.”

In his 13th game, and with two Test and two T20 hundreds already to his name, Rishabh Pant finally has his maiden ODI half-century ?#INDvWI pic.twitter.com/kqWeRIpItD

Iyer approached the innings as the conditions and game situation demanded. With Sheldon Cottrell in the middle of a magical spell that included the wickets of KL Rahul and Kohli, Iyer showed the preparedness to play the waiting game, playing out a maiden to the seamer. As the wrist-spin of Hayden Walsh came along, he pounced on a short of length delivery and played a fierce square cut to get off the mark.

A quite passage of play followed after Rohit’s wicket as India scored just 10 runs between overs 19 and 23, before Pant settled in and India started ticking along again. Iyer registered his fifth ODI fifty, and his third in a row, with a single off his 70th ball, and only then did his first lofted shot cme, a neat swing off Roston Chase’s off-break that soared into the Chepauk stands, reminiscent of the three consecutive hits he had stroked off Afif Hossain the the T20I decider against Bangladesh a month ago. 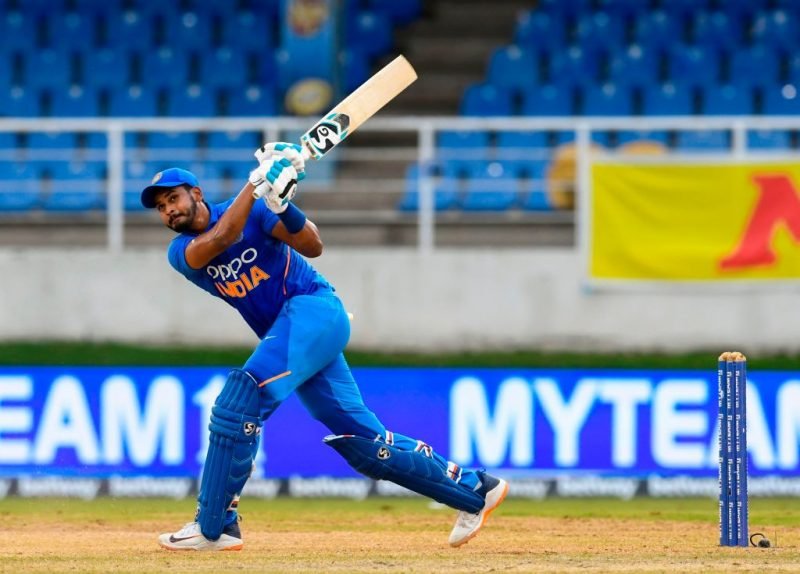 As it turned out, the 114-run partnership on a humid day was overshadowed by Shimron Hetmyer’s outstanding display: a stroke filled 139 off 106 that set up West Indies’ eight-wicket win. But Kohli has been quick to praise the youngster, even giving him that most lofty of accolades – that Iyer reminded him of himself.

“Shreyas has come along really well, he’s just stepped in and played with a lot of confidence. That augurs really well for the team.”

“Shreyas has come along really well, he’s just stepped in and played with a lot of confidence. That augurs really well for the team,” said Kohli. “He’s presented a strong case for himself to be a contender and a regular feature in the middle order, if he keeps continuing to play like that and take responsibility in that manner.

“I was exactly the same when I came in. Any opportunity I got, I wanted to win games for my team, and play according to the situation. You have to take risks – he was brave under pressure. You need to reveal your game, you need to realise who you are, what your game is, what kind of player you are. I think he’s heading in the right direction.”

Related Story: Takeaways from India’s squad for the 2022 Asia Cup

India have five more ODIs lined up this home season, two against West Indies and three against Australia, and Iyer should be given all of those. They then head to New Zealand for a full tour, which will be a novel test of his technique, one that involves shuffling across, in conditions where India were skittled for 92 in January. But if technical challenges await, Iyer at least indicated he might have the temperament to last the long haul.