Three wins, two captains – this IPL season could not have gone any worse for the Delhi Daredevils. Using CricViz data, analyst Ben Jones explains how it has gone so wrong.

Though the positives are few for Delhi, they are there. The emergence of Rishabh Pant as a frontline, match-winning batsman is hugely significant for planning ahead of next season. He stands third in the run-making chart behind only the international class of Kane Williamson and KL Rahul, and you’d suggest it won’t be long before he’s discussed in the same breath as that duo.

Equally, Prithvi Shaw looks to be an elegant but destructive opener who can form a formidable opening partnership with Pant going forward. Nepalese spinner Sandeep Lamichhane has only made one appearance, but seemed to cope with the pressure rather well, and should be retained for next year.

But aside from these crumbs of comfort, Delhi coach Ricky Ponting will be hugely frustrated by so much of this team.

Kagiso Rabada was lost to injury before the tournament, which was a body blow to Ponting and Gautam Gambhir’s planning. Since the World T20 in 2016, Rabada has a powerplay economy of 6.7rpo; it’s not hyperbole to say that his presence at the Feroz Shah Kotla could have transformed their season, Rabada building early pressure for the rest of the attack.

Nevertheless, the absence of the South African has exposed the weakness of Delhi’s homegrown seam unit. Indeed, this was arguably the most decisive factor in Delhi’s struggles this year; not one of their Indian seamers registered a positive average bowling impact this season. Not a single one. 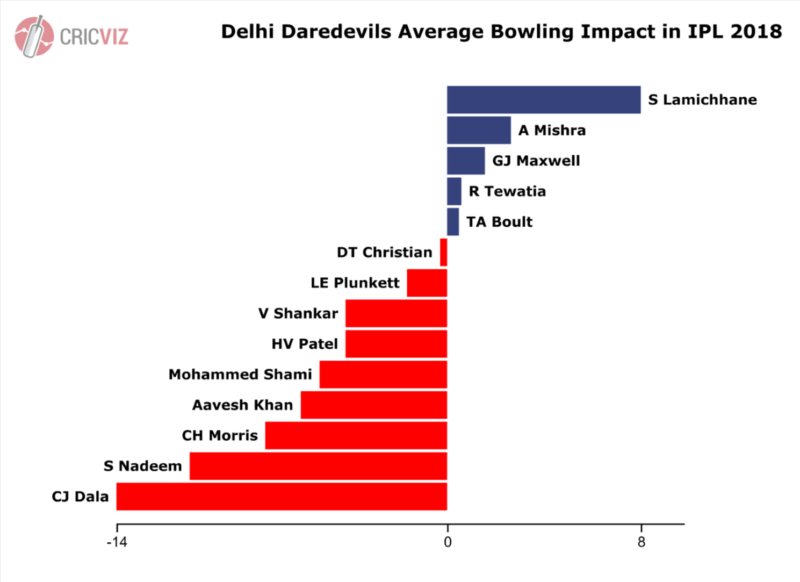 Their bowling overall has been high-octane in rather the wrong way, with their seamers the second most expensive in the competition after Kolkata Knight Riders. Shreyas Iyer has been almost entirely reliant on Trent Boult to make early incisions, with 6 of their 14 powerplay wickets coming from the Kiwi. In terms of individual performance, Boult is probably just about worth retaining – but the rest of the attack needs to be sorted out.

Just three of Delhi’s batsmen have registered a positive batting average impact for the season; Pant, Shaw and stand-in captain Iyer. Regardless of the heroics from Pant, that’s an unsustainably poor showing. 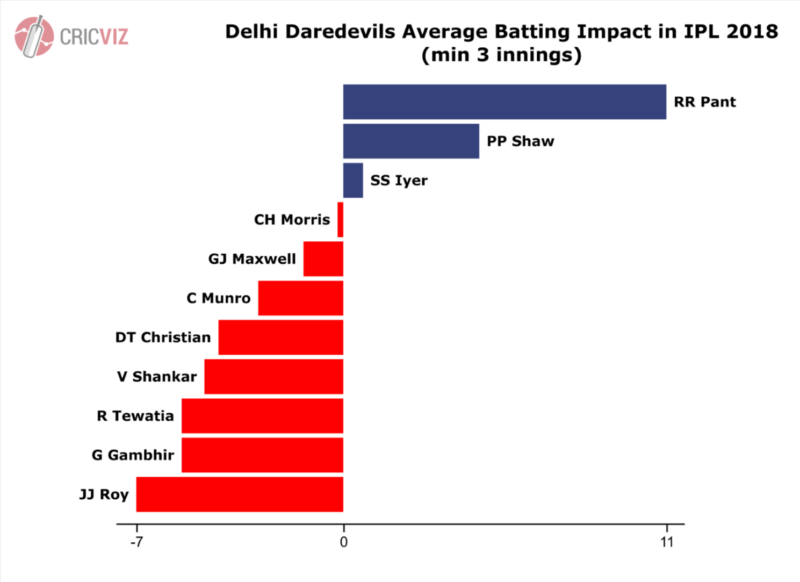 Regardless of the less than optimal squad list construction, Delhi were blindsided by the unexpectedly abysmal form of Gautam Gambhir. As the graphic below makes plain, he had by far his worst ever IPL season with the bat, and as he stepped aside he left the captaincy behind. The place he left at the top of the order was filled by Prithvi, which we’ve made clear was one of the few positives, but the slow start which Gambhir oversaw gave Delhi a handicap they couldn’t overcome. 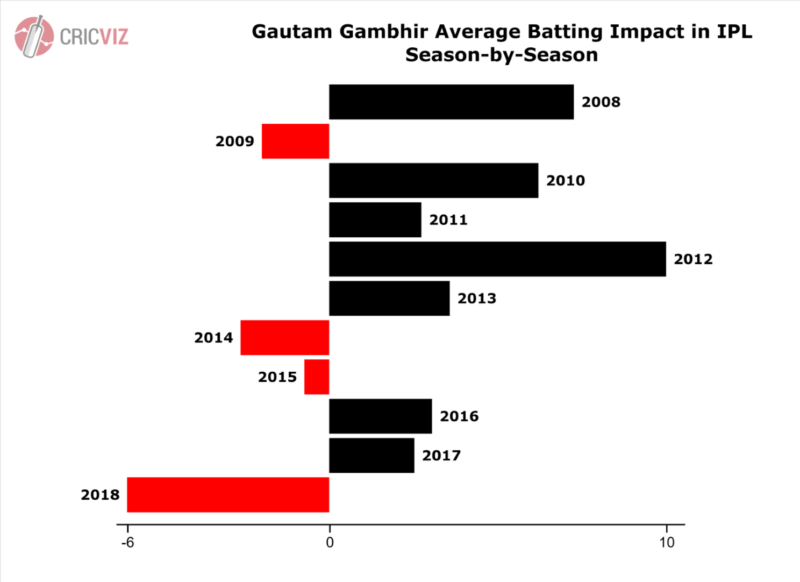 Alongside Rabada’s injury, the loss of Chris Morris after only four games was significant. Whilst he was hardly having a stellar tournament, he had the potential to balance the side and to ease the burden on the homegrown seam attack. Over the last two years Morris has an average batting impact of 3.1, and would have been crucial in shortening Delhi’s tail; their last five batsmen have provided just 93 runs all tournament.

All of Glenn Maxwell, Chris Morris, Colin Munro, Jason Roy and Dan Christian arrived at the competition with the potential to make a significant impact, but none registered a positive overall impact. Boult is the only overseas who has performed well. As mentioned, Morris is a world-class all-rounder who should be impacting high-profile tournaments such as this, yet he barely left an imprint.

Some observers may question whether players such as Roy and Munro (explosive but mercurial openers) require a longer run in the side to get settled, but Ponting and co have shown a lack of willingness to do so. The way they handled Roy really didn’t help. Over the last 12 months, T20 openers pass 40 runs in around 27% of their innings, whilst Roy has done so only 5% of the time. His talent is unquestioned, but he needs a run in the side to showcase his high-risk, high-reward approach. He was never given it, and as a result his 91* against Delhi was his sole substantial contribution.

In particular, the performance of Maxwell will sit badly with Delhi fans. The Australian is arguably the best T20 all-rounder in the world, yet he’s been shunted around the batting order like a mid-range player. He’s batted in every position in the top six, and Delhi’s failure to find a consistent role for their most talented player – arguably the most talented player in the competition – is unforgivable.

Flexibility is a fundamental of modern T20 success, but talents like Maxwell need to be indulged and prioritised. Even in the presence of young starlets like Prithvi, or specialist openers like Jason Roy or Colin Munro, Maxwell should be walking out to bat at the top of the order, with 120 balls to bring under his spell.

Combine all these factors together and it is not difficult to see why Delhi have struggled so miserably throughout IPL 2011.