In May 2000, a month before making his Test comeback after more than three years out of the side, Craig White mysteriously collapsed in Scarborough. Weeks later, the all-rounder played a crucial role in England’s historic series win against West Indies, rediscovering himself as a cricketer in the process.

Craig White began the summer which ended with England’s first Test series victory over West Indies for 31 years collapsed in a gutter with blood pouring from his face.

In May 2000, the Yorkshire all-rounder had been shopping in Scarborough when, after feeling a sharp pain in his chest, he blacked out, gashing his chin and twisting his knee as he fell. With a pub in close proximity, onlookers assumed White was feeling the effects of a couple too many. But the reality was far more concerning. White was rushed to hospital where he underwent heart and brain scans but all the results came back clear. “You don’t collapse for no reason and it is disturbing that the doctors couldn’t find an explanation,” he said at the time.

Later, he would wryly reflect he wished that the blackout had come a few years earlier, such was the jolt it gave his career.

Born in West Yorkshire but raised in Australia, White had returned to England in 1990, aged 20, to join his home county and was fast-tracked into their first XI. Initially signed as a hard-hitting batsman who bowled off-breaks, in 1993 the Yorkshire coaching staff encouraged him to switch to seam. The results were immediate.

“Every now and then Martyn Moxon [Yorkshire captain] would throw me the ball in games when nothing was happening, and it built up from there,” says White. “All of a sudden my pace was getting better and I was knocking people over. I’d only been bowling seam for 18 months – if that – when I got an England call-up. Crazy really, looking back on it.”

When Ray Illingworth became England’s chairman of selectors in 1994, the former Yorkshire captain and coach identified White, who’d he seen develop first-hand at Headingley, as the man to bat No.6 and bowl first change in his Test side. But it was asking too much too soon of White – whose selection was regarded by many as Illingworth playing favourites – and after six matches he was discarded, returning briefly in the winter of 1996/97 for two more Tests but again failing to make an impression. With a batting average of 14 and a bowling average of 41 from eight matches, it appeared he had been consigned to the scrapheap for good. 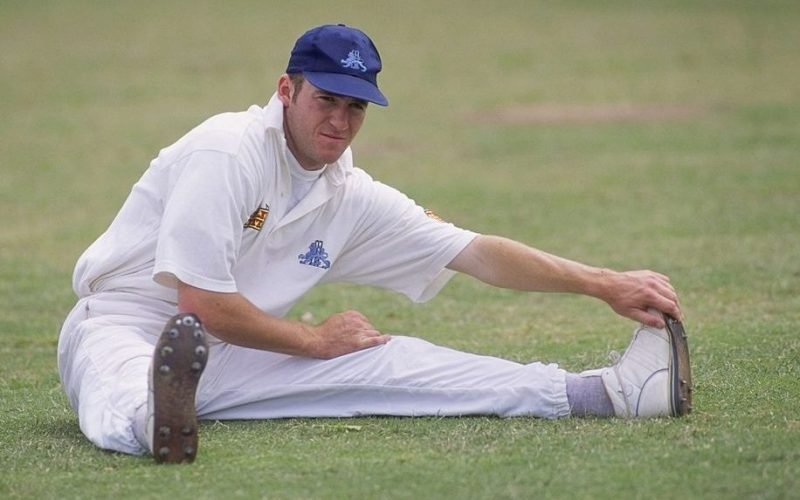 White became disillusioned with the game and even contemplated packing it in to join the fire service, until he was a surprise late addition to England’s ODI squad for the tour of South Africa and Zimbabwe in 1999/00 – the first trip under the new captain/coach combination of Nasser Hussain and Duncan Fletcher. During that trip Fletcher told White he believed he could have a future in the Test team but it was the health scare that followed which triggered his rebirth as an international cricketer.

He rested for three weeks after the incident in Scarborough, resolving to play with more freedom when he returned. To start enjoying his cricket again.

“My attitude towards playing has changed,” he said in June 2000, two days before the second Test against West Indies at Lord’s, his first Test match for almost three years. “I’m just going out to do my best and bollocks to what anyone thinks or writes.”

In the days leading up to the match, White had his first of several encounters with Brian Lara that summer, only on this occasion it was in a London nightclub rather than out in the middle.

“Back then you’d meet up probably three or four days before the Test match and everyone would have a night out, you’d have a few beers and then you’d get stuck into your practice,” recalls White. “I remember I was in a nightclub with Goughie [Darren Gough] and Brian Lara was there with Dwight Yorke. Lara laughed at me as if to say ‘You’re never going to get me out’. I think he even said those words: ‘You’ll never get me out’. You’ve just got to be careful what you say don’t you…”

White replaced Andrew Flintoff for the Lord’s Test – one of four England changes after the drubbing they received in the first match of the series at Edgbaston – but had a largely uneventful game, bowling eight wicketless overs and scoring 27 runs. For England though, it was a match of huge significance, later described by Hussain as “a major turning point in modern English cricket.”

After England conceded a first-innings deficit of 133 and looked set to go 2-0 down in the series, a year after sinking to the bottom of the Test rankings, Hussain feared his time as captain could be over before it had really begun. Instead, England’s skipper, who was forced to miss the match with a broken finger, watched on from the balcony as Gough, Andrew Caddick and Dominic Cork skittled the Windies for 54, before Cork hit the winning runs in a nervy chase to level the series. 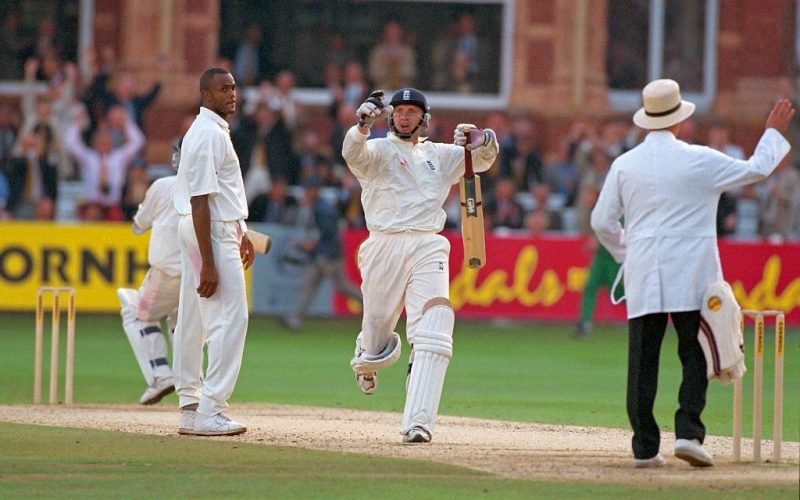 White’s returns didn’t stand out in the drawn third Test at Old Trafford either – just three wickets and six runs in the match – but his pace was causing a ripple of excitement. Suddenly, seemingly from nowhere, England’s bits-and-pieces all-rounder was consistently cranking it up to 90mph.

“I sometimes surprised myself,” says White. “I knew on my day I was up there but the environment that Nasser and Duncan had bred, they made me feel very comfortable. It was the first time for a while that I’d felt wanted and worthy of a place in the team. Before then it was just survival, everyone in it for themselves, trying to get the next Test match or tour.” 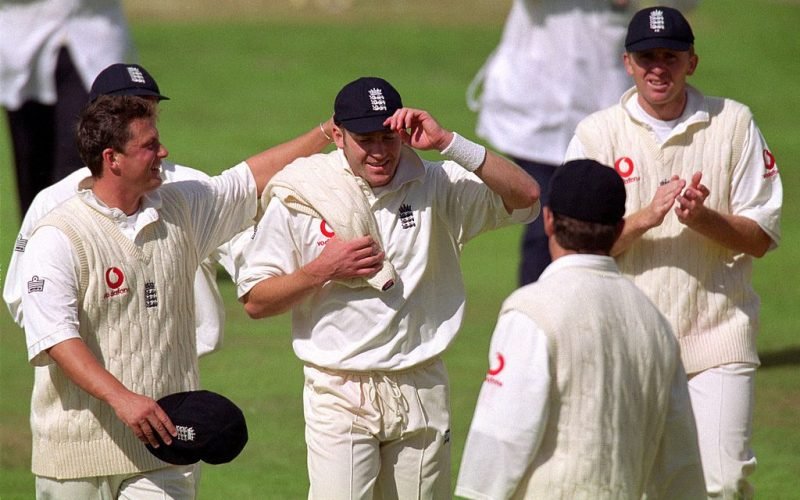 In the fourth Test at Headingley – a riotous match completed shortly after tea on day two – White was irresistible, taking 5-57 in West Indies’ first innings, including the prize scalp of Lara, whose words a few weeks earlier came back to haunt him. Struggling with the angle White posed from round the wicket, the left-hander shouldered arms to an in-swinger which trapped him bang in front. Gone for 4, it was the third of five single-digit scores for Lara in the series.

Such was the potency of Caddick and Gough – bundling the tourists out for 61 in 26.2 overs, still the lowest Test score at Headingley – that White didn’t even get a bowl in the second innings, as England went to The Oval 2-1 up with one to play, on the verge of a historic series victory.

“We ran off the pitch after we won and about 15,000 fans waited around on the outfield”

In the lead-up to the final Test, Fletcher had been watching Lara closely in the nets and noted that, following his lbw dismissal at Headingley, he’d started batting on off-stump and was getting bowled round his legs. England’s coach told White – now the enforcer of the attack – to aim for Lara’s exposed leg stump. The plan worked perfectly, even if the execution was a little awry.

“It looks great now but it was far from perfect,” says White of his dismissal of Lara at The Oval – the first golden duck of the Trinidadian’s career. “It was meant to be a yorker but it was basically a leg stump half-volley. When I let go of the ball I thought it was four runs, but he was that far over, his leg stump got knocked out.”

White finished West Indies’ first innings with figures of 5-32. After taking 14 wickets in his first 10 Tests, he’d now taken two five-wicket hauls in as many matches. 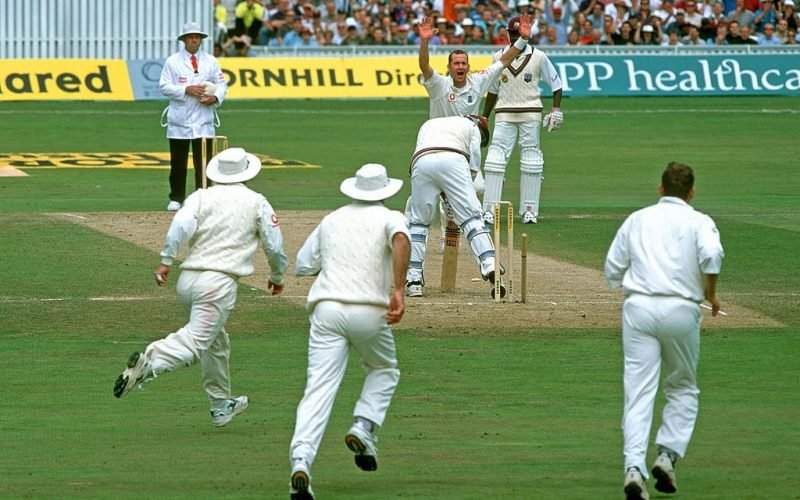 Mike Atherton’s final Test hundred on English soil took the hosts out of reach before Gough and Caddick shared seven wickets between them to finish the job in front of a sell-out crowd. England had beaten West Indies in a Test series for the first time since 1969. A year on from being booed by their own supporters after an abject defeat to the Kiwis at the same ground, Hussain’s men were lauded as heroes.

“We ran off the pitch after we won and about 15,000 fans waited around on the outfield,” recalls White. “We went out onto the balcony with the trophy and champagne. It was like being a rock star.”

Michael Vaughan later described his Yorkshire and England teammate as “about the quickest bowler in the world” at that time but White only played a further 18 Test matches, his third and final five-wicket haul coming at Perth on the 2002/03 Ashes tour as a succession of injuries took their toll. “I don’t think my body was made to bowl that fast really,” says White.

He was ever-present on England’s triumphant winter tours of Pakistan and Sri Lanka in 2000/01, where his ability to find reverse swing was a prize asset, but his most notable achievements in the remainder of his Test career came with the bat: a gutsy 93 at Lahore in 2000, a crucial 35 at Karachi on the same tour during England’s famous win in the dark, and a maiden century against Kumble and Harbhajan at Ahmedabad the following winter. His most fluent knocks came when given free rein at No.8 – 94* at Trent Bridge against India in 2002, and 85* at the MCG later that year in what proved to be his final Test.

White played his last match for England at the 2003 World Cup and then hardly bowled a ball for his county that summer. He played four more seasons for Yorkshire as a specialist batsman before retiring in 2007, that freewheeling summer of 2000 the abiding memory of his peculiar career.

“He went through a phase of being able to bowl at lightning pace,” wrote Vaughan in Time to Declare, “and I only wished he had been more at ease with being on the international stage. I thought he was a cracking cricketer and if he had a drawback it was, contrary to what you think for one of Australian background, that he was very much the type that needed a supportive arm around the shoulder.”

Related Story: Nasser Hussain: Virat Kohli ‘doesn’t know what to do’ against the swinging ball

During the Windies series of 2000, and in the couple of years that followed, Hussain had provided that support, even if an arm round the shoulder wasn’t necessarily his style.

“I can count on one hand the number of times I went out socially with Nasser but I had a really good working relationship with him,” says White. “I knew he rated me and I respected him as a captain and a cricketer. We had a really good understanding of each other. I kept myself to myself, enjoyed my space, and he respected that. He was good at letting you be yourself.”

To the read the full inside story of England’s series win against West Indies in 2000, purchase a copy of issue 32 of Wisden Cricket Monthly.