Sam Stow lists down the best and worst team-building activities – all the beers and other ideas, in issue 5 of the Wisden Cricket Monthly.

While Kevin Pietersen recently suggested that “getting hammered” was the best approach to team bonding, it seems doubtful that any of the England teams he played in were quite so committed to upholding this mantra as the Australian sides of the Seventies and Eighties. Not only did the likes of Doug Walters, Rod Marsh and David Boon show incredible determination and discipline to drink more than a can an hour en route to England (44, 44 and 52, respectively, were their PBs according to ‘official’ records), but they were ably assisted by a supporting cast of pacemakers, scorers and cabin crew, one stewardess telling Marsh in 1983, “You drink them, I’ll bring them”. How’s that for team unity?

Sceptical about the traditional interpretation of ‘bonding’ (“an overrated term normally linked to reminiscing about past escapades with a truckload of grog on board,” as he put it in his autobiography), Steve Waugh took his team to Gallipoli en route to the 2001 tour of England. Battlefield visits have since become somewhat of an Ashes cliché, but Australia’s stopover in Turkey was the first of the genre. “It puts things into perspective for us because people call us heroes but we just play sport and we’re good at it,” said Waugh in typically straightforward, but nonetheless poignant, fashion. 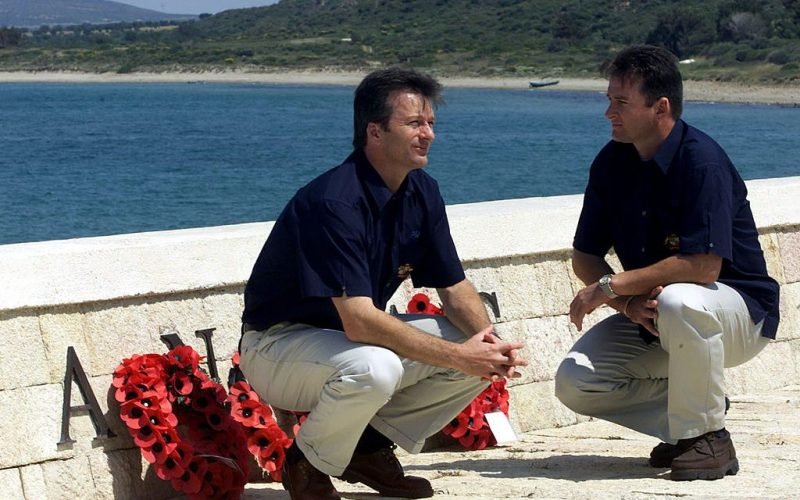 Waugh brothers – Steve (left) and Mark at a monument at the Anzac Cove, Gallipoli during their 2001 visit

‘Silly Walks’ aside, the brilliantly named ‘Ministry of Cricket (and other homeless sports)’ would be WCM’s favourite government department if, indeed, that’s what it was. In reality, it’s Montreal’s marvellous multi-sport facility, specialising in team building activities including bubble soccer and the unnervingly named ‘Sherlock escape room’. It’s reassuring to know that Quidditch and cricket double-headers will be part and parcel of Quebecois corporate away days for years to come. ECB participation strategists take note.

Organised by India coach Anil Kumble in 2016, ‘Drum Circle’ (sitting in a circle and playing drums, in case you wondered) saw players from the senior and ‘A’ squads demonstrate their rhythm and let off some steam in Bangalore under the watchful eye of professional percussionists, Drum Jam. The activity was described by the BCCI as a way to help the team “communicate, team build, transcend barriers, improve group communication and harmony, and energise participants”, which all sounds as hollow as a bongo when the man who set up the jamming session walks out amidst unrest less than a year later.

It may have been followed by an historic victory on Australian soil and lauded as a success by Messrs Flower and Strauss, but England’s Bavarian boot camp in 2010 made a mockery of common sense. In a sparring session reminiscent of David and Goliath, Chris Tremlett went toe-to-toe with James Anderson, leaving England’s first-pick quick with a cracked rib just five weeks before the start of the Ashes. Still, Anderson should count himself lucky he faced Tremlett in his playing days. Since retiring in 2015, ‘Big Goober’ has been spending a lot of time in the gym turning himself into ‘Very Big Goober’.

#ProteaFire is the name given to a campaign centring on a set of team ethics and values instituted by former skipper Graeme Smith, summed up by JP Duminy as “humility, resilience, courage, adaptability, unity and respect”. That’s all very well, but when it spawns 1,001 bombastic YouTube videos (predominantly involving team huddles and sweaty training slo-mos), it’s difficult to shake the feeling that – despite CSA’s insistence to the contrary – it’s just as much to do with marketing as #TeamCulture.

We’re not ones to side with Shane Warne on many things, but even by John Buchanan’s standards Australia’s pre-2006/07 Ashes boot camp in the Queensland outback was a little over the top. While Warnie didn’t do himself any favours by voluntary sacrificing clean undies for extra ciggies, there seemed little point in getting professional cricketers to rough sleep for three days or carry massive jerry cans while dressed in army fatigues, especially not ones with a chronic shoulder injury who missed two Championship games for Hampshire to take part in the secret boot camp.

First published in issue 5 of the Wisden Cricket Monthly