Cricket is cricket, and Westminster is Westminster, but sometimes the twain shall meet, writes Sam Stow as he lists down the best and worst politics-and-cricket episodes.

Don’t discount Jeremy Corbyn winning both an election and a summer contract with Northants in 2022, but to date Alec Douglas-Home is the only British prime minister to have played first-class cricket. A career spanning four seasons in the mid-1920s featured 10 matches for six different teams, 12 wickets at 30 and 147 runs.

Once upon a time you had to kiss a baby or visit a biscuit factory to pull off the perfect political PR shot, but these days frontbenchers take guard instead. Whether it’s Boris Johnson channeling John Daly, Ed Miliband blocking his way to plastic-bat glory, or David Cameron dispatching Indian infants to the four corners of the Maidan, just type ‘cricket’ and your favourite minister into Google and you’ll be entertained for hours. 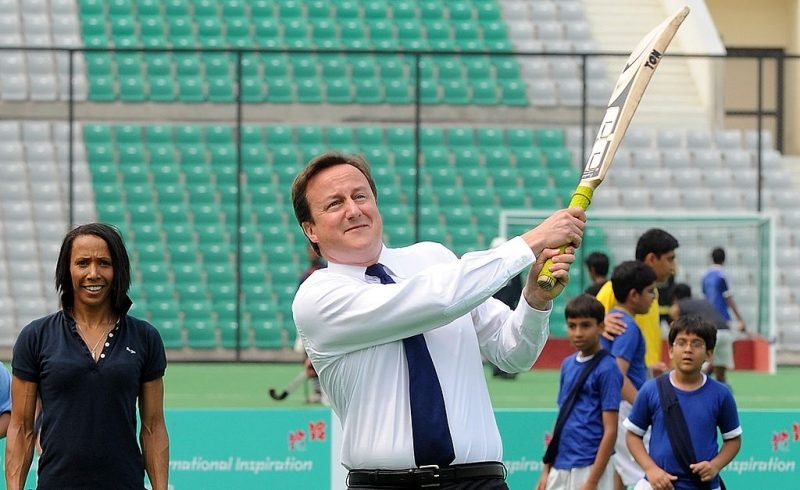 Openly insulted then effectively demoted in the 1989 cabinet re-shuffle, Geoffrey Howe decided to pen a withering resignation speech that precipitated the end of Margaret Thatcher’s premiership. Confirming his departure on November 1, 1990, Howe delivered his memorable oratory 12 days later, extending a cricket simile that Thatcher had herself constructed at the previous evening’s Lord Mayor’s banquet, where she assured attendees she would not be “ducking the bouncers”. Howe derided the PM’s approach to negotiations with Europe, suggesting: “It is rather like sending your opening batsmen to the crease, only for them to find, as the first balls are being bowled, that their bats have been broken before the game by the team captain.” By the time the month was out, so was Maggie.

Learie Constantine – remembered as much for his performances in the legendary Lancashire League as for his 18 Tests for West Indies – was a cricketer of rare talent, but it was his achievements beyond the boundary rope that made him a truly remarkable man. A barrister, race-relations activist, MP in his native Trinidad, and a High Commissioner, he was knighted in 1962 and became the UK’s first black peer in 1969. As CVs go, you’d take it.

Learie Constantine, a West Indies great, a @NelsonCricket legend, and an important advocate for racial equality, died on this day in 1971.

John Arlott paid tribute to his extraordinary career and life in the 1972 @WisdenAlmanack https://t.co/yjyRbxIcrd

The Beer Tender and the Beef

There are two leaves in cricket – good leaves and bad leaves. Brought into bat by Boris Johnson (yes, him again) for a pro-Brexit event at Chester-le-Street, Ian Botham was in no doubt which category the UK’s potential departure from Europe fell into. In hindsight, his suggestion that “we’re some wickets down, but we can win the match” marked him out as one of the referendum’s more astute pollsters. BoJo’s own performance was less convincing, with photos from the event showing the soon-to-be foreign secretary supping pints of both a typically malty British ale and the Belgian-style craft beer, Blue Moon – a coded nod to his poorly hidden ambivalence.

Rebels Without a Cause

They were conspicuous by their absence from Auntie’s I Love The ’80s series, but whether Johnny Vegas remembers it or not, the decade was chock-a-block with rebel tours to apartheid South Africa. The first and, arguably the most awful, trip by an English team took place amidst great secrecy in 1982. The nation was outraged, the touring party were dubbed the ‘Dirty Dozen’ by Labour MP Gerald Kaufman, and the lack of quality in the ‘South African Breweries XI’ (England’s catchy pseudonym) was the icing on this particularly wretched cake.

The Line Belongs to the Umpire

Years before he played Brutus to Boris’ (yes him AGAIN) Caesar, Michael Gove was an actual actor in the 1995 comedy A Feast At Midnight. A boarding school chaplain, Gove was afforded a single line, indeed word, of dialogue (“Amen” in case you’re wondering), but is more memorably called upon to umpire a school cricket match. Everything’s straight up and down until VE Longfelllow, played by Christopher Lee, takes a Dukes to his danglies and is left in a crumpled heap. The former justice secretary’s reaction to this minor crisis is to puts his hands together in supplication and withdraw into silent prayer. You couldn’t script it… but they did.