Jo Harman pens down the best and worst tales of parental support, featuring some unbreakable bonds and faulty networks in issue 8 of the Wisden Cricket Monthly.

Martha Grace was a force of nature, educating her children in the ways of the game and telling anyone who’d listen that she’d given birth to stars in the making. In 1859 she wrote to George Parr, the England captain, alerting him to the potential of two of her sons: “I am writing to ask you to consider the inclusion of my son, EM Grace – a splendid hitter and most excellent catch – in your England XI… It may interest you to learn that I have a younger son, now 12 years of age, who will in time be a much better player than his brother because his back stroke is sounder and he always plays with a straight bat. His name is WG Grace.”

Eleven years after his retirement, a well-preserved 50-year-old Dennis Lillee shared the new ball with his son Adam for an Australian Cricket Board Chairman’s XI against a near full-strength Pakistan side and the pair took six wickets between them. While Adam was indebted to his old man’s frugality – DK rolling back the years to concede just eight runs in eight overs – father had son to thank for his second wicket, with Lillee Junior taking a one-handed grab at fine-leg.

Having played six first-class games but failed to realise his dream of representing India, Arvind Pujara turned his attention to the next generation. For two decades he coached the sons of poor railway workers free of charge, using his pension fund to pay for cricket balls that each cost half his daily wage. Four of his pupils went on to play first-class cricket for Saurashtra, while one has reached the very pinnacle of the game. “I think the greatest gift for me from my father is that he has made me a cricketer. A Test cricketer,” his son Cheteshwar told ESPNcricinfo in 2015. “How many in India get to play for the country? I must be one of the luckiest few.”

Welcome to the Gunn show

George Gunn played alongside his father of the same name on 34 occasions for Nottinghamshire and in 1931, against Warwickshire at Edgbaston, both struck centuries in the same innings – believed to be the only instance that a father and son have hit hundreds in the same first-class match. It was the 62nd and penultimate century of Gunn Senior’s career and a maiden ton for his son. 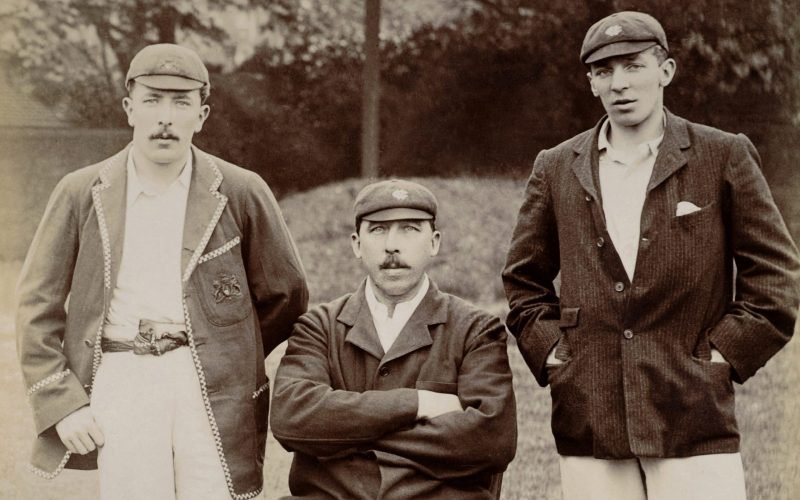 (Right to left) George Gunn Sr. with uncles William and John, circa 1904

It was another 86 years before a father and son passed 50 in the same first-class match, as Shiv Chanderpaul and his son Tagenarine hit half-centuries for Guyana in 2017, sharing a second-wicket stand of 38. But after that rosy start the pair suffered an unfortunate mishap earlier this year when, in a cup semi-final live on TV, Shiv’s straight drive struck the bowler on the foot and his son was run out in a match their side went on to lose.

After her son had indulged, by his own admission, in “a few too many bottles of wine” in the lead-up to the 2003 World Cup, Brigitte Warne did as all good mothers should and pointed out that he’d got a bit fat and might want to sort out his double chin. “Hey, you’ve put on a few, why don’t you take one of my fluid tablets?” Warne later reported his mum as saying. Brigitte’s advice backfired spectacularly as Warne took his “fat pill”, failed a drugs test on the eve of the World Cup and was banned for a year. “I never, ever blamed Mum,” Warne later said.

When Kumar Sangakkara called time on his illustrious Test career in 2015, the cricketing world united in paying tribute to his superlative achievements – with one surprising exception. “Kumar did well, don’t get me wrong. But did he achieve his true potential? I don’t think so,” wrote his father and self-confessed harshest critic, Kshema. “For the world, Kumar was this venerated technician,” he continued of his son, who scored more than 28,000 international runs. “But in my opinion, he never reached that level.” There is really no pleasing some people.