In an exclusive chat with Wisden.com, England limited-overs captain Eoin Morgan heaped praise on Adil Rashid, calling the leg-spinner “one of the best variation bowlers in the world”.

Rashid has long been one of the pre-eminent wrist-spinners in world cricket. Since the end of the 2015 World Cup, when he made his international return, the Yorkshireman has claimed 148 ODI wickets, more than any other spinner in the world. He played all 11 games in England’s 2019 World Cup win, taking figures of 3-54 in the semi-final against Australia, and appears to have reached a new level in 2020, having overcome a shoulder injury that had limited his effectiveness. Albeit from a small sample size of four matches, he has never recorded a better bowling average in a calendar year, taking his wickets at 21.50.

“I think he’s just continued to get better,” said Morgan. “One of the doubts for Adil over the last year or so has been about his shoulder, and I think the work that he’s put into that, the way that his body has reacted, has such an impact both on his throwing and on his variation deliveries as well. I think the pace that he bowls at now makes him more difficult to pick through the air than before.

“The biggest compliment you could pay to him is that this is probably the best he’s ever bowled and considering the last four and a half years, he’s been one of our best bowlers, I think he’s just continued to get better. He’s one of the best variation bowlers in the world right now, and that’s saying a lot. There are a lot of good variation bowlers.

“If you look at Adil’s bowling, the pace that he bowls at just gives him an extra skill. He was world class before this, and now it’s taken him probably above everybody else with the extra variation. He’s almost a couple of different variation bowlers in one. I suppose one extreme is the pace at which Park [Matt Parkinson] bowls and then the pace at which Rashid Khan bowls at. I think Adil can cover both ends and in between as well, and that doesn’t just come about; It comes with being comfortable about your game, being comfortable to bowl these different variations at different times, at different paces. And having the ability to do it as well.”

Rashid appears to enjoy playing under Morgan in particular, and the Irishman describes him as something of a captain’s dream, keen not just to put the time in to improve his technical game, but to work on his tactics tirelessly as well.

New Balance have revealed the kit that will be worn by England’s T20I sides for their upcoming T20I encounters.

The red kit was first worn by England Women during their Women’s T20 World Cup campaign earlier this year in Australia, in which they were cruelly eliminated by rain at the semi-final stage. 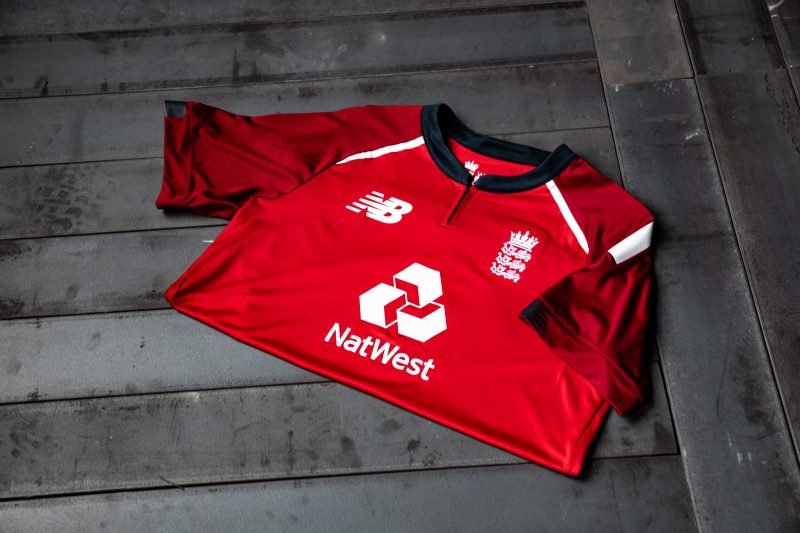 “I really like it, I do,” says England white-ball captain Eoin Morgan. “And to be honest, some of the T20 kits in the past, I haven’t been huge fan of. But I am actually a really big fan of this. I think the texture and the colour and actually the fit of the jersey is really nice. Well done, New Balance.”

The kit is available to buy at www.newbalance.com

“Me and Adil have quite a strong relationship,” he says. “One of the huge benefits within the white-ball setup is that one of his best friends, mentors, is in and around as well in Moeen Ali, the two of them are very very close friends that are extremely jovial and great around the changing room but the two of them work incredibly hard at their own skill. They’ve been on this journey together both testing each other and trying to improve the whole time, and I think having Moeen around has helped a huge amount.

“It’s helped me and Adil’s relationship in captaining and making him feel comfortable enough to be that attacking variation bowler that he is. And I would say also having Jos Buttler in the team as well, also having similar attributes, giving good feedback, being a world class player, having travelled around the world and played against fantastic variation bowlers, can feed back honestly, and Adil enjoys that, he enjoys being questioned and having to tell the story of what he’s trying to do and setting guys up or restricting the runs or trying to get them bowled in between the gate or different things on the tactical side.”

Rashid’s success in the shorter formats has been such that there have been calls for him to win a third crack at Test cricket. From 19 Tests so far, his record – 60 wickets at 39.83 – doesn’t stand out, and he currently only holds a white-ball contract with Yorkshire.

But he was England’s best bowler on their last tour of India, taking more than twice as many wickets as any other tourist, and with Joe Root’s side due to tour there in the winter, and Rashid seemingly bowling better than ever, a Test recall could be on the cards. According to national selector Ed Smith, “Adil still has aspirations for England in all forms,” and Morgan, who has played 16 Tests, feels he “absolutely” has the skills to succeed in the longest format.

“He has all the variations to play every format,” he says. “He’s already displayed in Test match cricket that he can do that, so there’s no reason why not.”