For No.4 on Wisden’s women’s innings of the decade, Rishad D’Souza revisits the time an 18-year-old Hayley Matthews denied the mighty Australians their fourth T20 World Cup title.

Chasing their fourth T20 title, Meg Lanning’s Australia Women had posted a formidable total of 148-5, following fifties from Elyse Villani and the captain herself. If they felt the job was half done, they had good reason to believe: No team had chased over 124 in the tournament, and that too had been achieved by the defending champions themselves.

West Indies had cause for optimism too: their skipper and opener Stafanie Taylor had been in good form throughout the tournament. True to form, she provided a solid base in the chase, but 18-year-old Hayley Matthews, who had scored just 87 runs at 17.40 at a strike-rate of 91.57 in the tournament until that point, was to be the star of the day.

#WI's Hayley Matthews is awarded Player of the Match for her amazing innings. A star is born!#AusWvWIW #WT20 pic.twitter.com/u5MXobbivO

After nine balls of caution that brought her only two runs, she provided the first glimpse of her intent, dispatching Rene Farrell to the deep midwicket fence with a pull shot. Later that same over, she played a heave to the same region for another four.

Filled with confidence from those strokes, she never looked back. She used her feet to the quick bowlers and played audacious shots against the spinners on a tricky pitch. She targeted the on-side boundary, but was adept at finding the off-side fence when bowlers threw it wide in a bid to keep her from targetting her favourite area. She brought up her maiden T20I fifty with a powerful square drive for four off Jess Jonassen, whom she had hoicked for six two balls earlier over the midwicket fence.

While she struck boundaries with regularity, she and Taylor remained mindful to not get carried away, fully aware that one untimely wicket could very well present Australia with an opportunity to pull things back. From the start of the seventh over to the end of the 12th, they hit only three boundaries, only one of which came off Matthews’ bat. But during that relatively dry period, Matthews kept the scoreboard ticking over with smart running to make sure the game didn’t get away from them.

When she was dismissed for 66 off her 45th ball, caught at midwicket off a misplaced pull off Kirsten Beams’ bowling, her side required just 29 more runs from 26 balls. Taylor too fell for 59 off 57 towards the end of the chase, but that couldn’t keep West Indies from winning with eight wickets and three balls to spare. 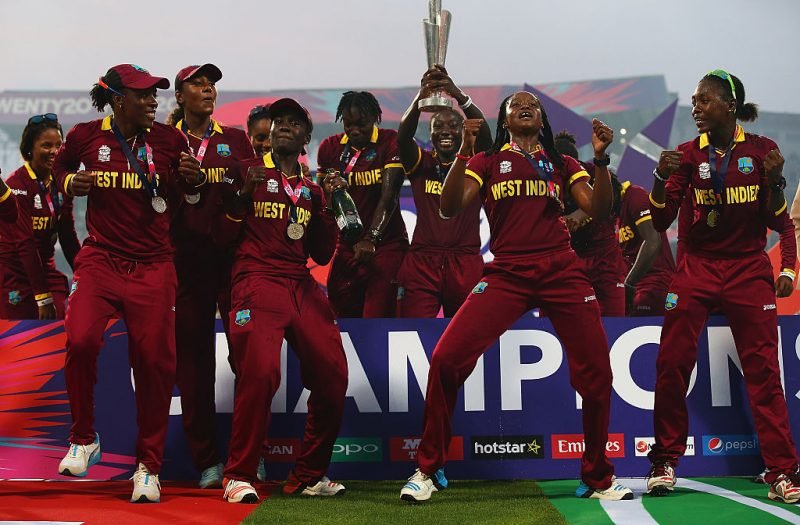 Matthews had struck three boundaries by this point, including a mighty heave over long-on to a half volley from Megan Schutt, but, as a result of the openers’ initial watchfulness, West Indies were yet to start scoring at a run a ball, and the asking rate had climbed to eight. If West Indies were to win the trophy, it was crucial for them to make the most of the last over of the Powerplay, which was bowled by Ellyse Perry.

Sensing the potentially make-or-break nature of the moment, Matthews decided she had to act with intent. In a shot of brazen audacity, she danced down the track to Perry to meet the ball on the full and with a mighty swing of the bat sent the ball well up and over the straight boundary.

Decade in review series is brought to you in association with Perry, designers of distinctive club blazers made in Yorkshire since 1946.