There have been just eight women’s Tests this decade. Six have featured Australia, all of them Ashes contests. And still, Ellyse Perry has found time among them to confirm her status as one of the greats.

She began with the ball, a first-innings haul of 4-56 helping Australia to a seven-wicket win in January 2011. She closed out with the bat this July, an unbeaten 76 following on from 116 in her first dig at the crease as Australia retained the Ashes at the first opportunity. But the pinnacle came in November 2017 in her own backyard.

In the first day-night women’s Test, Perry marked her guard with Australia 54-2, which soon became 95-4. England’s 280 looked a long way off, and the Ashes were in the balance; an English win would see the tourists take a series lead. A backs-to-the-wall rearguard to ensure parity was her first requirement, although that didn’t mean the shots were put away altogether: her work through the covers remained a fine sight. The half-century arrived from her 137th ball as she soaked up the spectacle under lights. 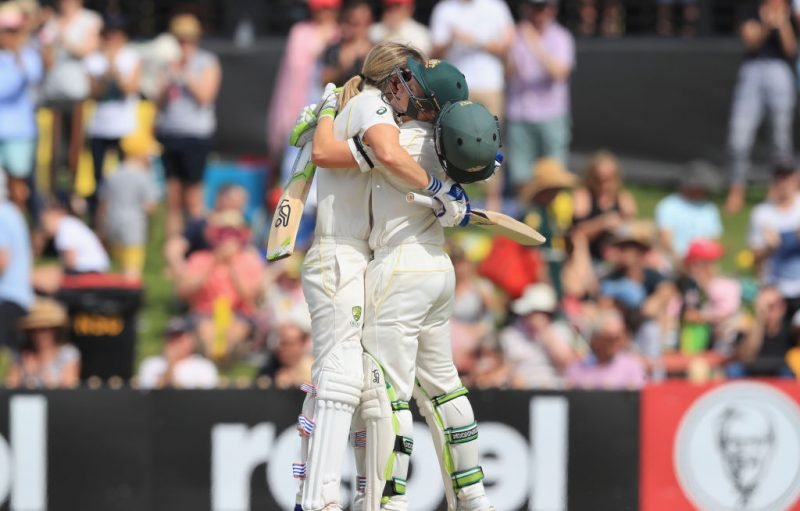 At this point in her career, even with her batting talent unquestionable, Perry had yet to taste the sweet success of three figures. In ODIs she’d entered the nineties on four occasions, finishing unbeaten three times as completed run-chases and the limitation of 50 overs acted against her. Here, finally afforded that precious commodity Test cricket provides – time – Perry could have her day in the sun.

A swat to the fine-leg boundary off Laura Marsh did the trick, and she sprinted away, the helmet and bat in the air before she locked into an embrace with her good friend Alyssa Healy. The childlike joy of a hundred remained inescapable for a then four-time World Cup winner.

The desire was still there for a bigger statement – a century would have felt ordinary for a cricketer capable of the extraordinary. She delivered 213 unbeaten runs, the English left unable to find a way through.

Perry now has four international hundreds in the bank, another T20 World Cup medal at home and the highest and brightest singing her praises. Earlier this year, Charlotte Edwards felt compelled to label Perry as “the greatest female player we’re ever going to see”. It didn’t feel like hyperbole.

Perfection. The three fielders on the leg-side boundary were helpless as Perry went to 200 with an outrageous six over deep midwicket, a striking blow that showed little respect for England’s tactics. This time there was no running, just a hug with Megan Schutt, a kiss on the helmet badge and the arms aloft. An unwelcome twist was to arrive.

Replays showed the ball bouncing inside the rope; Perry was forced to go again. Sophie Ecclestone was hit straight for four an over later and Perry, with a hint of embarrassment, raised her bat. It still felt fitting. Only Ellyse Perry can hit a double-century twice in one innings.