On that June afternoon in Derby, Harmanpreet Kaur was a force of nature. Karunya Keshav revisits arguably the best ODI knock by an Indian.

Rarely does anything so incontrovertibly slot into greatness. But this one ticked all the boxes. A David v Goliath battle: check. High stakes: check. The hero overcoming a personal fallibility: but of course. The triumph of skill: present in spades. A momentous feat that laid down the marker for history and diverted the very direction of the future of the sport: check, check, check. Harmanpreet Kaur’s 171* in India’s semi-final against Australia in the 2017 Women’s World Cup will always be the answer, both philosophical and practical, to the question: What is greatness?

On the day, the question facing the rest of the Indian team was less lofty. Against the mighty Australia – a side they had lost to badly just days before in the group stage – asking ‘can they do it on a cold, rainy day in Derby’ seemed almost rhetorical. Surely they couldn’t, could they?

And surely not when they were reduced to 101-3 in the 25th over in the 42-overs-a-side game and had lost their in-form batter in Mithali Raj.

And so, in the biggest match there was till then, the big-match player that she is, thrived.

A typically slow start, in the company of Raj, had seen her reach 41 off 60 balls. She had played within herself, surviving a stumping chance, but also growing in confidence that she was able to find the middle against the seamers, an Achilles heel for her till then. But with Raj gone, and the young Deepti Sharma for company, it was time for her to cash in on the start. 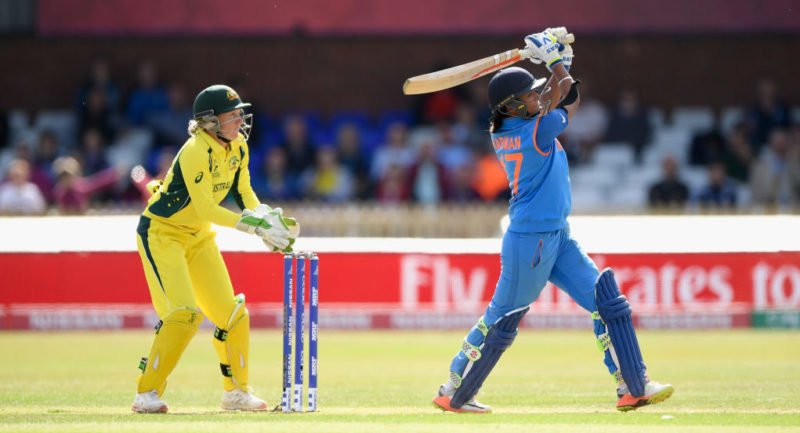 The beauty of that innings wasn’t only in the big-hitting, or in batting the stunned Australians out of the game: It was that it unfolded when the world was watching

The volcano bubbled over with a free hit, dispatched for six. It was the first of seven for the day. Jess Jonassen’s left-arm spin came for particular punishment.

The hundred, by then looking inevitable, was marked by no celebration and an angry outburst. Harmanpreet was livid at what she saw as Deepti’s hesitation in running a second and the potential run-out chance for her younger partner. It took a break in play while the stump mic was replaced for Harmanpreet to regain her outward calm and for Deepti to dry her tears. It also gave her battered body a much-needed break: she was cramping, the confusion about start times had meant she hadn’t had anything to eat all day, a long-standing shoulder injury needed constant care and a finger injury earlier in the tournament meant she could only just about grip her bat.

The beauty of that innings wasn’t only in the big-hitting, or in batting the stunned Australians out of the game: It was that it unfolded when the world was watching. Played out on prime-time Indian TV, with social media agog at the feats of this lithe young woman from small-town Punjab, it commanded respect, it promised entertainment. Nobody would look at women’s cricket the same way ever again.

The free-hit conceded by leg-spinner Kristen Beams was just the trigger Harmanpreet needed to let loose. She stepped out, got down to her knee and connected beautifully to send the ball soaring over long-on. Fittingly, she held the pose for a moment that should go down in posterity.

Having doggedly reached 41 off 60 balls, that was when the switch turned.

“If you look at the tournament till that point … I hadn’t stepped out and hit a six,” she describes in The Fire Burns Blue. “So when I got that free hit, that was exactly what I wanted to do. Anyone can step out and hit a six, of course, but you need to know whether you can pull it off on that particular day.

“As soon as the ball hit the bat, that shot gave me a lot of confidence.”