He began it as a leg-spinner who gave it a slog. He ends it as the best since Bradman. Phil Walker pays tribute to Steve Smith, one of Wisden’s Cricketers of the Decade.

The Oval, August 2013, and a woozy affair to cap a drab Ashes. Steven Smith, 24, has just carved his maiden Test hundred. It’s been fun to watch and a tiny bit silly, those tics and fumbles merely quirks in progress. No one begrudges his dance down the track on 94 and slap over long-on. No one minds at all. It feels like a glitch in the programme when we’re told he’s actually the youngest Aussie centurion since Ponting.

It was a feet-up kind of day, a day for lightly tossed asides. I thought it was a safe bet, and went with this: “This purveyor of hopeful bunts, impractical leg-breaks and dinner-lady hair… is an easy cricketer to like. He has a brilliant eye, pulls fearlessly, has great hands, and while the periscopic backlift never quite evokes solidity, he’s cleaned up that tendency to mistake his bat for a hitchhiker’s thumb.”

Full of chutzpah though it was, Smith was no one’s idea of a serious threat.

Well, that was then. 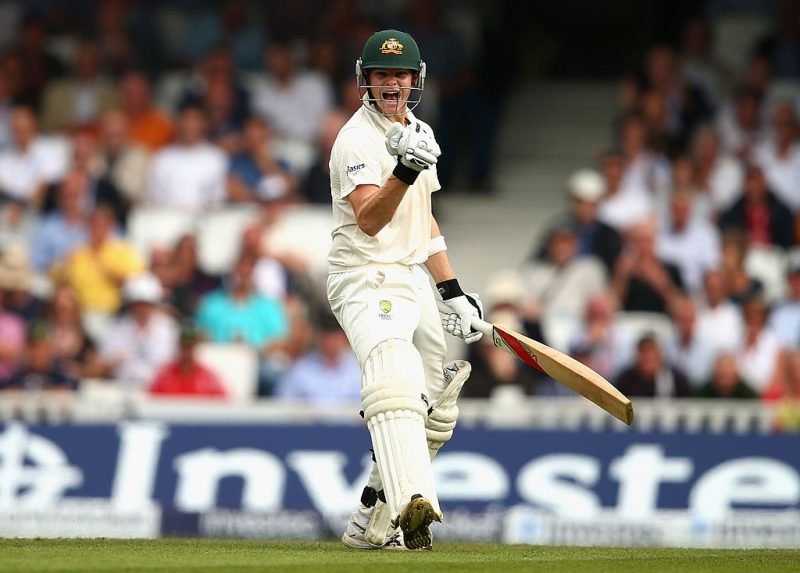 Smith celebrates his maiden Test century at The Oval in 2013

If we allow the Smith story to begin in earnest at The Oval, an innings which came in his 12th Test, he has made 26 centuries from 60 Tests. In context: Bradman made 29 in total from 52. Bradman made those tons over 80 innings; Smith, counting from that first century onwards, took 99 innings to reach century No.26. The gap gets even tighter against England: Smith has now made 11 Ashes hundreds from 20 matches, against Bradman’s 19 from 37. Their Ashes-ton ratio is almost identical, though Smith just shades it.

The comparison is worth it for the simple reason that Bradman was once considered incomparable. These days Smith closes up the space with each passing week, and all this in an era of mega money, myriad preoccupations, three formats, fewer gimme runs, Asian pitches turning square and the resurrection of real pace.

The affinity runs deeper than numbers. Hanging on one of the walls inside the MCG pavilion is a five-photo sequence of Bradman playing an off-drive. The stills are taken from his 270 against England in 1937 – an innings considered by Wisden to be the greatest of that century. The first photograph of the five, capturing the initial gather of Bradman’s ‘rotary’ backlift with its arc out towards gully, would be revealing enough. But the image is doing something else now, and causing us to look anew. Because eight decades on, we find that Steve Smith, whether by design or fate or subliminal intuition, has been honing a technique that carries visual and rhythmical echoes of Bradman’s perhaps more purely than any other batsman.

This ‘rotary’ batting style, pioneered by Bradman, has been fully investigated by Tony Shillinglaw, a cricket coach from the north of England. His lifetime’s study of Bradman’s technique has had to be updated to incorporate Smith. “Through bat-induced ‘rotation’,” he says, “both Bradman and Smith have intuitively and naturally tapped into the principles, motions and rhythms of the human body as their means of out-scoring all others.” 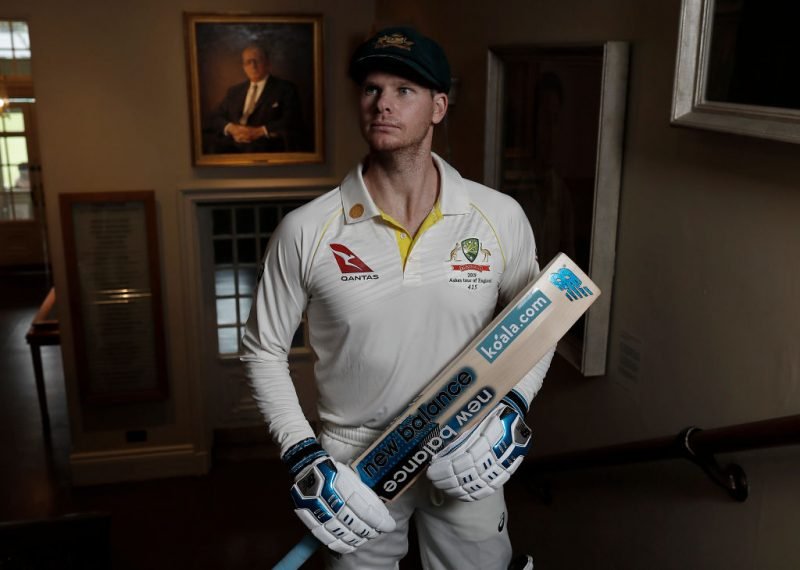 He believes (rather beautifully) that the enhanced freedom and co-ordination of mind, bat and body lies at the heart of each man’s success. “Such coordinated freedoms encourage quick and correct footwork, with the full flexibility of the wrists, knees and elbows providing an added versatility of stroke and all-round the wicket scoring not readily available to the more restrictive teachings.”

Smith’s technique is organically developed, comes with a public safety warning and may yet change the face of conventional coaching. But while Smith’s hand-eye coordination pushes him up towards genius, it’s his refusal to be constrained by conventional thought that tips him over the edge. “Why don’t others play like you?” Bradman was once asked by an interviewer. “I think,” he replied, “it’s because they are coached not to do it. It’s a different technique.”

And it doesn’t stop there. With obsessional men it never does.

I once visited Bradman’s childhood home in Bowral, meticulously restored, even down to the water tank with stump and golf ball to hand. You’re taken via a tour of the house into Bradman’s head: this kid with few friends, a fanatical self-improver, the kind of boy who, having read about an unbeatable table tennis player in Sydney, set about perfecting his own game so when they did finally meet he would beat him. A dedicated pianist who was desperate to be better than his sister. The kind of man who would recall many decades later in a radio interview the exact names of the two girls who got better marks than him in kindergarten. 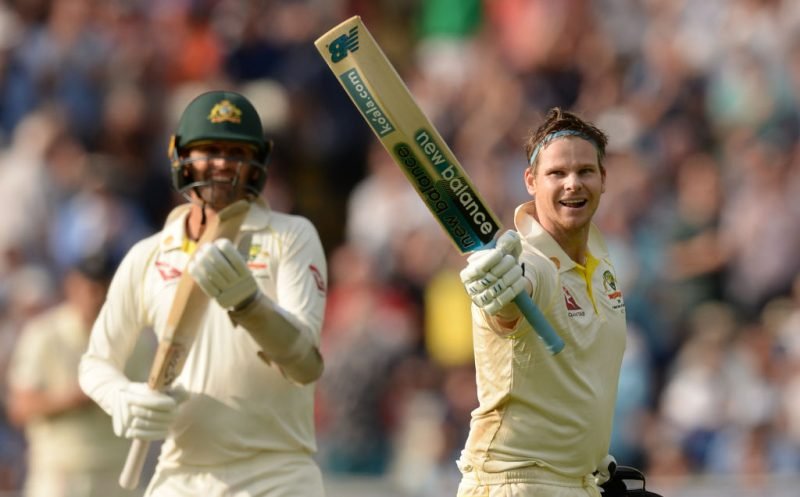 Smith celebrates reaching his first century of the 2019 Edgbaston Test

Smith keeps a bat and a pair of gloves by his hotel bed. His coach, Justin Langer, talks of him shadow batting in the shower, on the beach, in his sleep. When, on the last tour, Ricky Ponting walked past Smith’s hotel room at 7am, he heard the tap-tap-tap of Smith’s bat hitting the floor. He even gets his wife to feed the bowling machine for him.

And so, as with Bradman before him, a certain sniffiness invades the discourse. Before the last Ashes, I spoke with a former England captain about how to get him out. The irritable answer was revealing. “Stick two in short at midwicket, two out leg-side, stump to stump, don’t give him a sniff, bore him out.” Even after those hundreds at Edgbaston, Graeme Swann, on the Wisden podcast, was declaring that when Jimmy Anderson got it swinging last time out, Smith averaged “about four and a half”. He argued that England had effectively got spooked, betraying the basics and getting too funky too quickly. And yet the stats tell us that Smith is a maestro against the swinging ball, averaging well over 50 across his career against deliveries that move 1.5° or more through the air.

The finest minds are so baffled by what they see that they cleave to the weird. And sure, it’s all there: in those pre-shot jigs, each one a mini psychodrama; in the startled badger act whenever the ball drops anywhere near his burrow; in the Chaplin waddle, and the way that bowlers, stooges in Smith’s theatre of the absurd, incessantly throw their hands in the air when he chokes another wicket-ball to fine leg.

There’s the numerous gifs, turning the Smith leave-alone into some facsimile of performance art, and who can forget his shot at Old Trafford, midway towards a third Ashes double, falling into a wide square drive and landing flat on his face – that one, too, merrily photoshopped to within an inch of its life. But here’s the thing about that shot: it scudded away for four. And here’s another: he averages 166 in Test cricket playing the front-foot cover drive, miles more than anyone else of his time.

At Edgbaston last July, on day one of the Ashes, Steven Smith, 30, recommenced his Test career. He had overseen a scandal. He had cried, fully and uncontrollably, in front of the world’s media. For months on end, he had woken up with nothing to do except think. Experience had done its thing, and led him to this: his first first-class innings in 17 months.

“You’re a cheat,” some people chanted, as he walked to the wicket. “And you know you are.”

When he got to his hundred (one of his best), the body visibly sagged. The legs almost gave way. He removed his lid, threw back his head, and hoisted his bat towards an Australian balcony long gone berserk.

The crowd, for the most part, rose to their feet. Cricket fans can be quick to judge. But they appreciate greatness when they see it.

There’s no shortage of options. Last summer’s twin tons at Edgbaston and the Ashes-clinching double at Old Trafford were both seismic and cathartic. His impossible masterpiece on a raging turner at Pune – resulting in one of just four defeats suffered by India on their own patch across the whole decade – was his most technically agile. But how could we see past Brisbane, 2017? Smith’s first Ashes innings as captain, and a blueprint-knock, absorbing concerted periods of pressure, eliminating risk, wearing them down, and then opening up to put his team in front. A slim first-innings lead – Smith was responsible for 43 per cent of those runs – is enough to shift the pressure onto England. Under it, they buckle.