As part of Wisden’s decade in review, four of our writers locked themselves in a room and didn’t leave till they’d sorted out a County Championship team of the decade.

Harsh words were exchanged, tears were shed and a couple had to be restrained from getting the fists out. Here’s what emerged out of the rubble.

(County Championship statistics from the start of 2010) 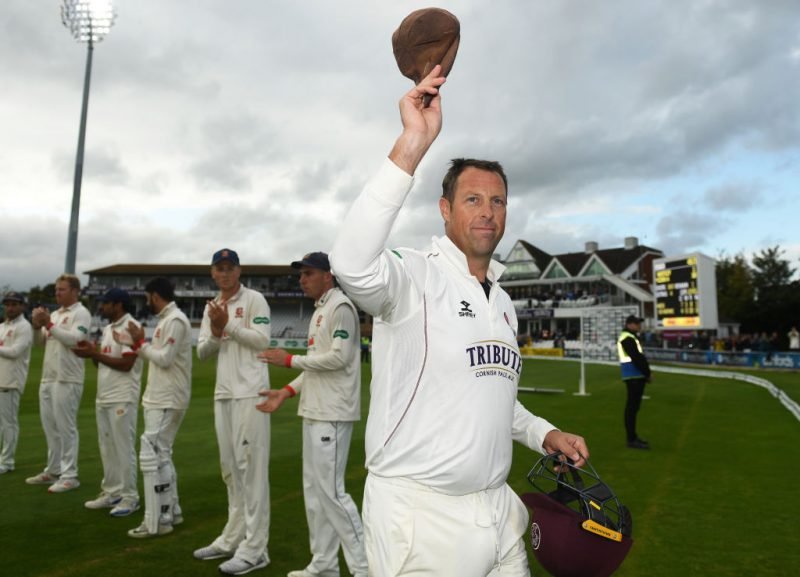 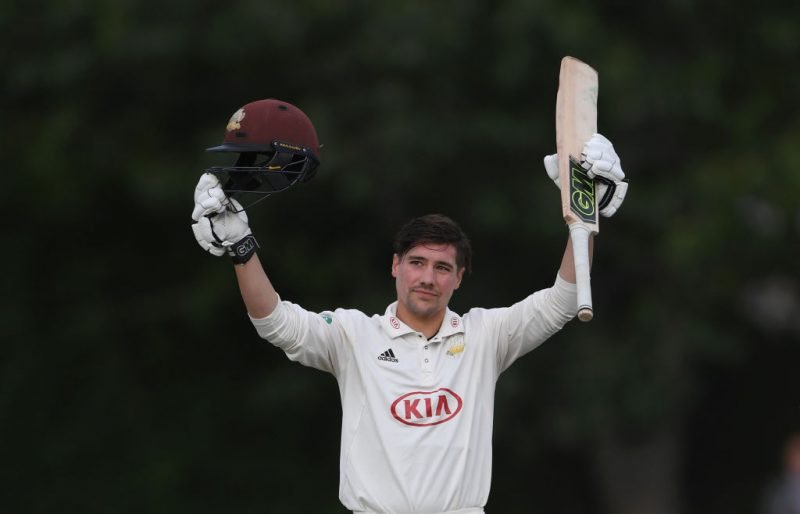 Phil Walker: There is a natural leaning to Trescothick because of what’s gone on before, but the numbers are good but not compelling. Take out the myth of Trescothick and the over-arching story, and consider that he’s batted at Taunton which is traditionally a lovely place to bat…

PW: Yeah, but that works out to what two and a bit a year. It’s not irrefutable. And Somerset haven’t won it either.

Taha Hashim: I guess when you’re picking a team of the decade you want the stalwarts in there.

Ben Gardner: I know Somerset haven’t won the County Championship but, despite that, they’ve been so close that they’ve been the standout team of the decade, threatening the Yorkshire dominance and coming so close in the last three years.

PW: I think Burns gets in there because of the consistency, because he led Surrey to the Championship when they hadn’t won anything in years. And because he’s now making a play to be an actual legitimate Test match opener. That is relevant and county cricket has to be seen in the context of England cricketers. Are there any left-fielders?

PW: Three more than Trescothick! I think Burns takes it by a nose off Mitchell – though Mitchell would be the hipster’s choice. It’s Burns and Trescothick on balance. 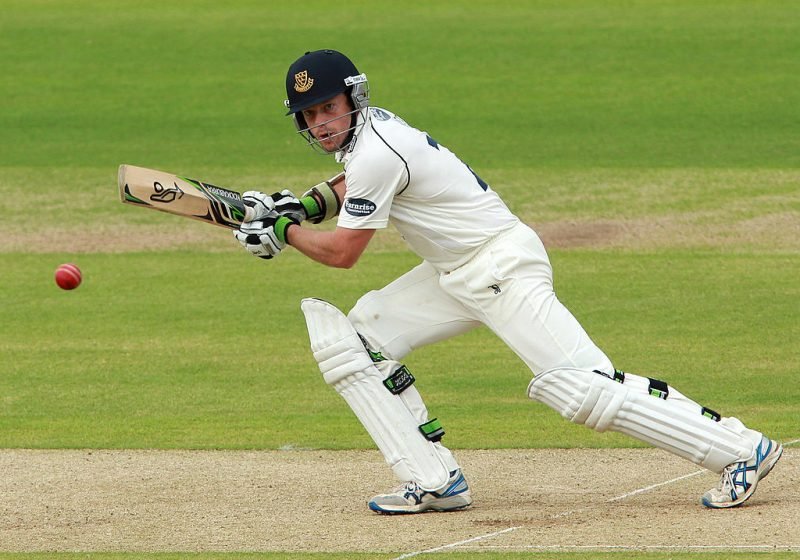 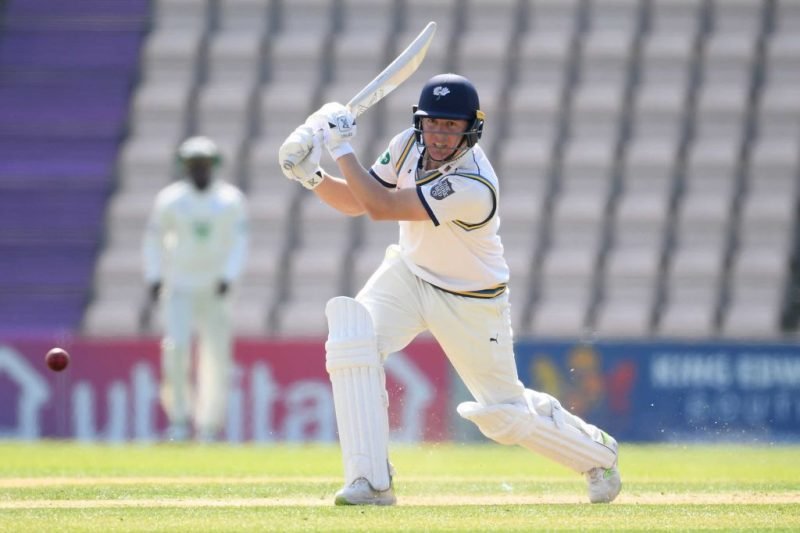 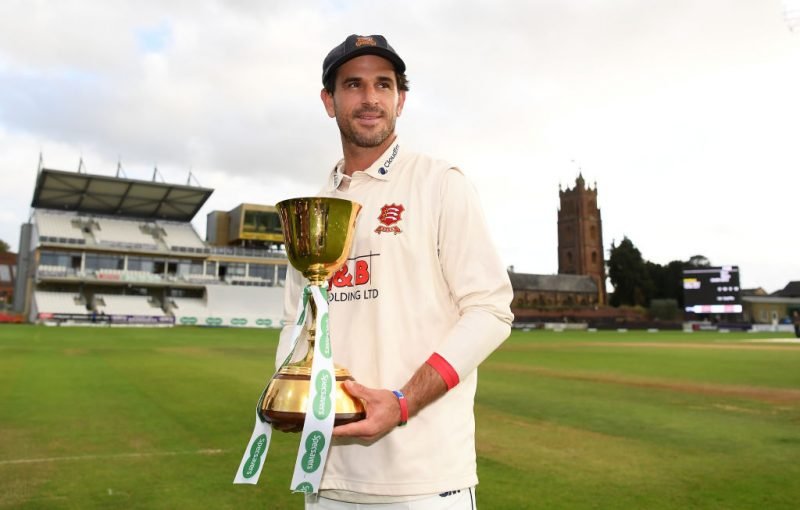 BG: What are Ed Joyce’s numbers this decade?

PW: That is strong.

BG: He’s got to get in somewhere.

JH: It’s interesting that we talk about Gary Ballance scoring stacks of runs in county cricket, but his record isn’t as good as Joyce’s. I would still try to get both of them in there. I think you can find room for both of them, but Joyce, in this crowd, is one of the best.

BG: It’s interesting that a lot of the middle-order crowd don’t average as much as you’d think.

PW: Sangakkara, if he played one more year, or even just 10 more games, it would become very difficult to avoid him. Bloke averages 63…

BG: While he was brilliant, Surrey didn’t win anything there.

PW: Joyce is the kind of player you want at three. Versatile player.

BG: He can do it in every type of situation.

TH: I was thinking Ballance at three, but when you look at the middle-order candidates, no one’s record is so phenomenal that you have to get them in there.

JH: Joyce’s been kind of a forgotten man in county cricket – I don’t know if that’s because he’s Irish. Maybe because he wasn’t talked about in England selection.

PW: I think he becomes an interesting discussion point, particularly as a skipper.

JH: At four or five, Ballance is definitely one of them and Hildreth as well, mainly because I can’t cope with fans being angry at me on Twitter.

TH: It would seem a bit odd not to have Hildreth, but then you don’t really have a place for ten Doeschate.

JH: Well, who’s our captain then?

PW: What was ten Doeschate’s average again with the bat?

PW: I know it turns a bit now, but overall Hildreth’s played on a wicket that’s been good to play on. I know he epitomises county cricket, but he averages 41, there’s not much in it between him and Tendo.

BG: In a way, wouldn’t it be fitting for James Hildreth not to be picked in our team…

PW: And captains in county cricket are massively important. You’re engineering stuff all the time.

JH: I want it on the record I backed Hildreth.

TH: We’ll make sure you don’t get any death threats. So we’re doing this? I’m a bit scared now. 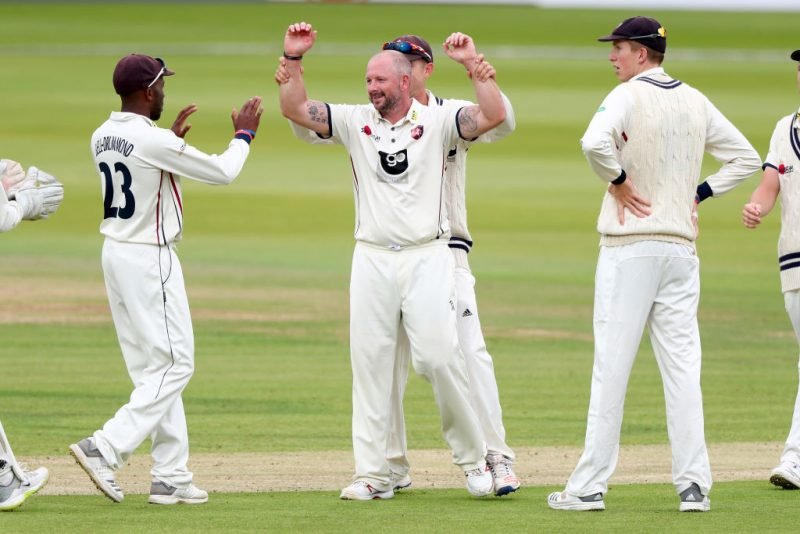 PW: So is Darren Stevens just a stick-on at six?

BG: It does feel a bit high for him.

JH: Averages 37 with the bat. You wouldn’t want Darren Stevens batting at six now but a few years ago, in this team…

PH: He’s made 16 hundreds, from the middle order. 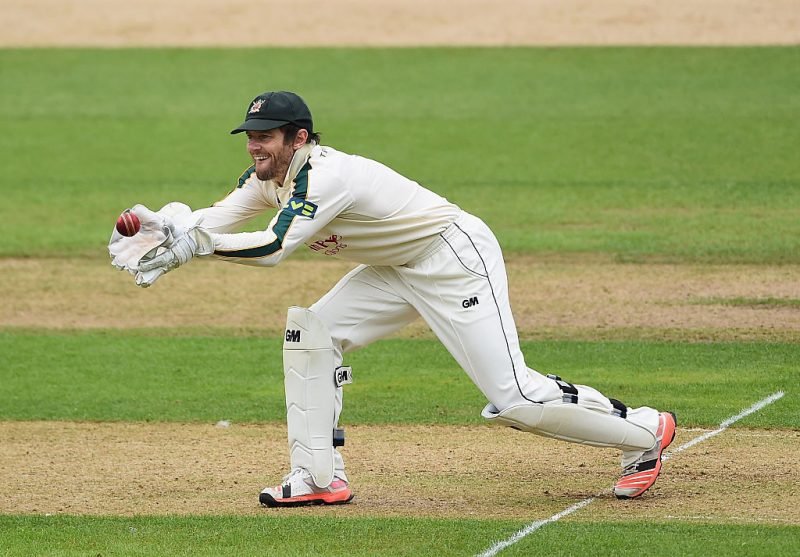 TH: Bairstow is head and shoulders above everyone else with the bat, but what are we really looking for? Do we want a purist?

BG: Well, he’ll be standing up to Stevens a lot.

JH: For me, you can’t look past Foster. Bairstow’s stats are ridiculous, but a bit like Moeen Ali, he’s sort of outgrown county cricket.

TH: I was quite surprised with Ben Foakes’ stats. Two hundreds as a keeper, but I guess he’s not played that much.

JH: To be fair, it’s probably a toss up between him and Foster as it’s been for most of their careers. I guess it’s about who you like more. In terms of their stats, there’s not much to choose between them.

TH: Read was Wisden Cricketer of the Year after they won the Championship in 2010. Quite a big deal.

JH: Who’s the better keeper? In my mind it’s always been Foster.

BG: Read was Notts’ Championship skipper through to his retirement.

BG: It’s probably Read then, isn’t it? That’s probably the heaviest heart we’ve had for a decision. 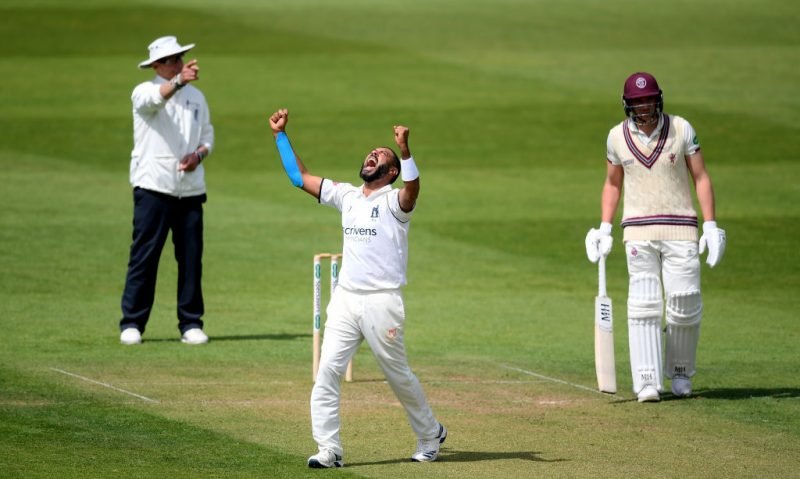 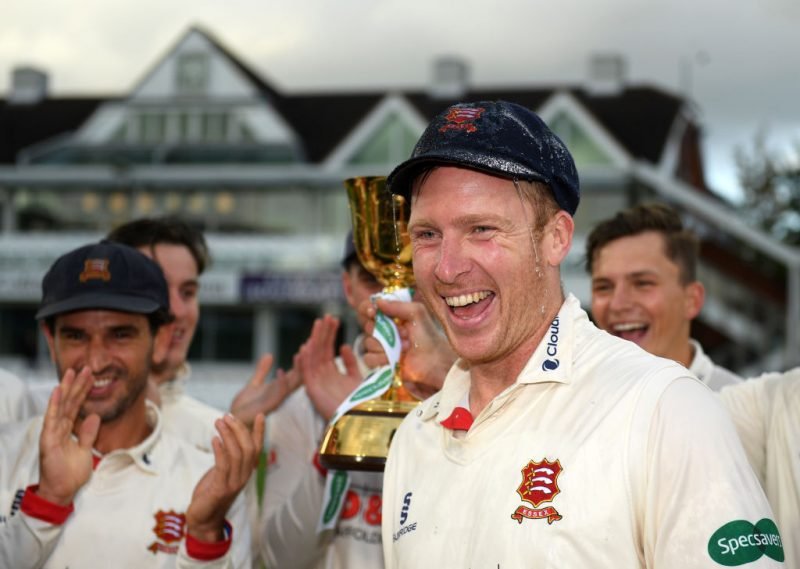 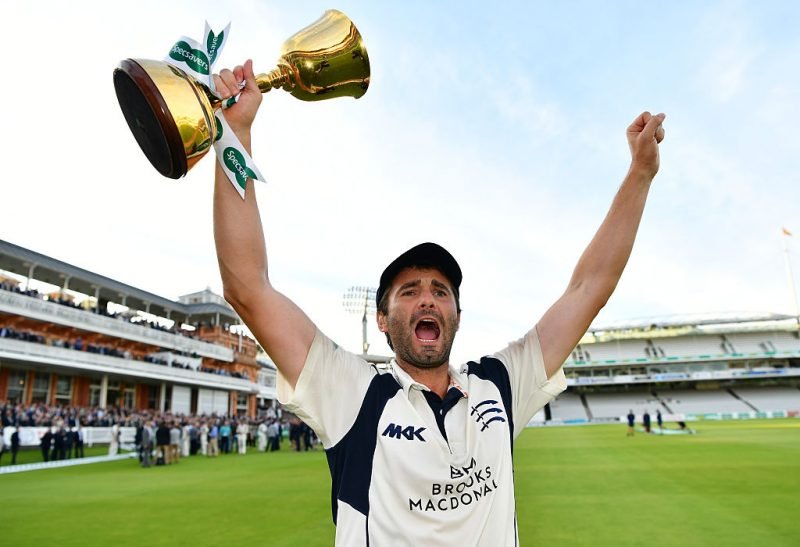 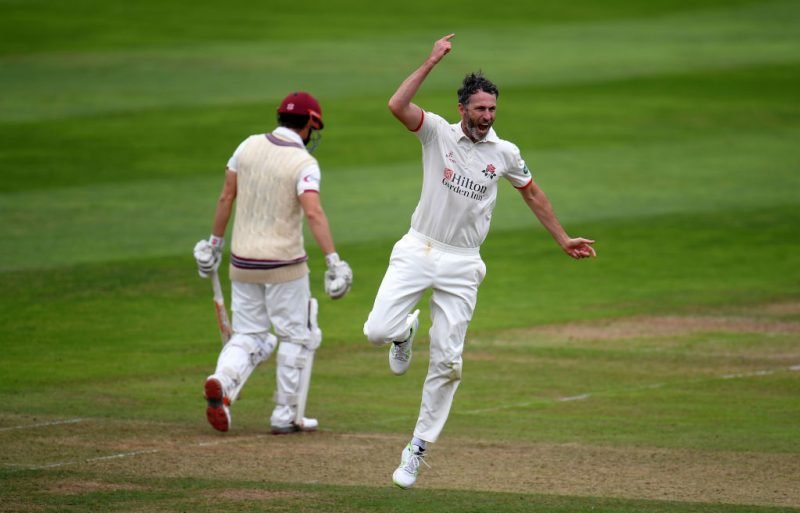 TH: What do we want from this attack? Two spinners?

PH: Are we not allowed to have both Harmer and Patel?

JH: I can’t get on board with two spinners given the amount of seamers that could get in.

PW: You boys are all too conventional.

BG: I think Simon Harmer, if we don’t pick him, is twelfth man.

PW: I think it’s mildly scandalous that Harmer’s not going to get picked.

BG: Patel feels more at home at No.8.

PW: Forget where they bat.

JH: Harmer’s only 30; he could conceivably be in the team of the next decade.

PW: Plus we’ve got Darren Stevens as our third seamer and he’s got 445 wickets! Only four fewer than Graham Onions! So there is a case to be made for two spinners, two opening quicks and Stevens to do the dirty work.

BG: In that case we’ve got to talk about which seamer we leave out.

JH: Let’s have some flexibility. We do need to pick our spinner and then we can have another who plays depending on the situation.

PW: If you look at the great County Championship teams, lots have had two good spinners. The Stevens argument is persuasive.

PW: Straight up, done. After that I have to say Onions. Look through the list and he’s the best bowler on it.

TH: The story’s good too. Didn’t play in 2010 with his back injury and came back. And he’s still playing.

JH: He’s still doing it at Lancs. He’s one of the great survivors of county cricket. He’s arguably the most popular county cricketer of the decade, because of his injuries and because he often got picked for England and didn’t play.

BG: We are going to end up with four opening bowlers – Stevens opens the bowling at Kent!

JH: Ideally we want someone with a bit of pace now, someone who doesn’t take the new ball.

TH: Well, we are talking about county cricket…

JH: Abbott is the closest to a proper fast bowler.

JH: Rushworth has to be in there. He was brilliant when they won the County Championship. He took 54 wickets that season, and in 2015 he took 83.

BG: I know Taha wants to make a case for Jack Brooks – he’s been banging on about him. And I guess Rushworth’s average has got to be inflated a bit by bowling at Durham.

TH: Brooks won two County Championships with Yorkshire, taking 133 wickets across the two seasons. Although didn’t Rushworth have that mad day where he took some ridiculous amount of wickets?

JH: Brooks is a bit quicker, but he’s dipped in and out. Rushworth really hasn’t had a bad year ever.

PW: By a nose it’s Rushworth for me. But we’ve got to have two spinners. One of these fast bowlers needs to be on the bench.

JH: I’ve come around to that, if you let Stevens take the new ball.

PW: Patel one end, Harmer one end – I know they’re both right-arm over – but that’s brutal.

JH: It is quite persuasive.

PW: Rushworth on the bench because he’s the one we’ve discussed longest.

TH: Alright, we happy with that?

PW: Yeah, a couple of Essex boys in there – that works. 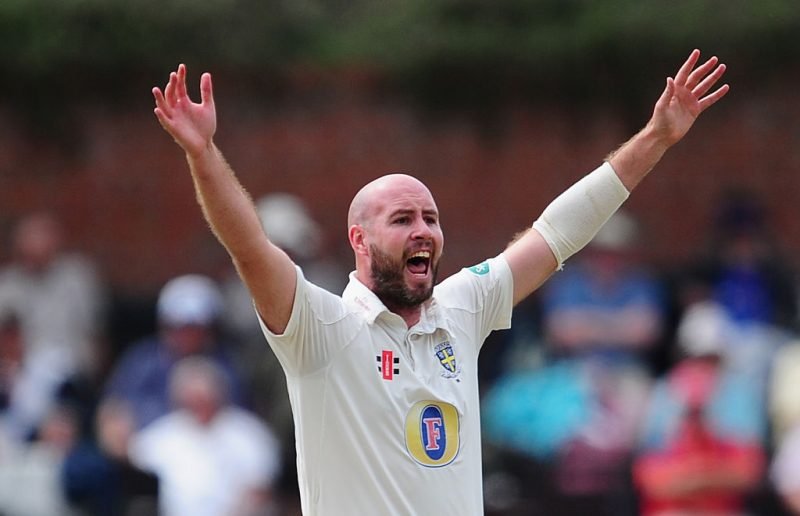