Yas Rana looks back at a special innings from Kusal Perera that powered one of the all-time great run chases.

Sri Lanka’s 2-0 series win in South Africa earlier this year ought to go down as one of, if not the, great overseas performances this decade. Prior to the series, South Africa had won 15 of their last 17 home Tests. Three of South Africa’s four-man seam attack in the Durban Test averaged under 17 with the ball in home Tests since the start of 2017 and the other member of the pace quartet was a chap called Dale Steyn. South Africa were fearsome at home.

On the other hand, their opponents Sri Lanka had just arrived from a painful, 2-0 series defeat in Australia where they had taken just 18 wickets across both Tests and passed 200 just once. They had won just five Tests outside Asia in the last 10 years, with two of those victories coming in Zimbabwe. Of the 10 Sri Lankan batsmen to play in five or more Tests outside of Asia in the preceding four years, none averaged more than 40 with the bat and the only one to average north of 35, Angelo Mathews, was absent through injury.

For most, a series win for South Africa seemed like a foregone conclusion. And with Sri Lanka reduced to 226-9 in their pursuit of 304, it looked like it was going that way even if the tourists had perhaps exceeded expectations until that point. A plucky 96-run stand between Kusal Perera and Dhananjaya de Silva had kept Sri Lanka interested but the loss of four wickets in 6.3 overs looked to have extinguished any realistic aspirations of victory.

Perera had already shown remarkable physical bravery. Against a genuinely rapid trio of Kagiso Rabada, Duanne Olivier and Steyn, Perera was on the receiving end of two nasty blows – one to his left hand, the other to his helmet. All this less than two weeks after he was forced to retire hurt after being hit on the helmet during Sri Lanka’s tour of Australia. 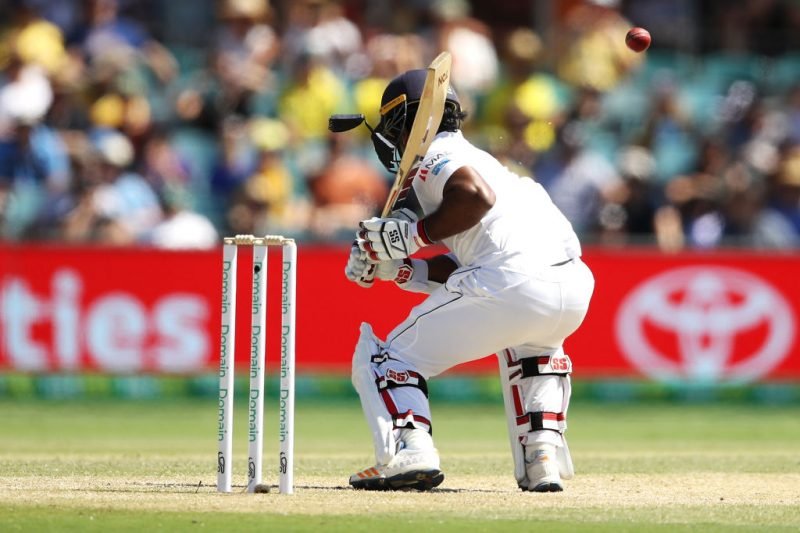 Perhaps what stands out most from Perera’s innings is how quickly he changed the momentum of the game. One moment, South Africa were just one wicket away from a seemingly inevitable victory, and the next Faf du Plessis is in full defensive mode, desperately trying to protect his bowlers from Perera’s controlled onslaught.

The tone was set nine balls after Sri Lanka’s No.11 Vishwa Fernando – a man who had never once passed 35 in professional cricket – came to the crease when Perera advanced down the wicket to left-arm spinner Keshav Maharaj and hacked him into cow corner. Two overs later, Perera reached his hundred, just his second in Test cricket. His teammates stood up to express their admiration, but the job was far from done.

Twenty-four of Sri Lanka’s last 60 runs came in sixes. Perera’s second maximum of the day was audacious as he took on a well-directed bouncer from Olivier by swivel-hooking it, front foot off the ground, for six. The clarity in decision-making was striking – remember, he had been hit on the helmet twice in as many weeks and once more on the hand earlier in the day. Du Plessis had two men on the ropes waiting for a shot exactly like that one but that was of little concern to Perera. When playing the shot, he had only one thing on mind – smash it out the park.

Once he passed 100, his farming of the strike was excellent – Fernando faced just 13 of the last 63 balls – and once du Plessis had retreated all of his fielders, with the exception of a solitary slip, to the boundary, Perera’s game plan was clear. It didn’t matter that there were eight fielders on the fence, when the ball was in the slot, Perera backed himself to clear the ropes every time.

He smacked 27 runs first three overs of the second new ball, religiously sticking to his formula. That onslaught put Sri Lanka within 14 runs of victory and Perera stayed true to his method. If there were nerves, he didn’t show them. He deposited Steyn over deep mid-wicket and then jammed out a quick single to put his side within six runs of the target. Two leg byes and a guide down to the third-man boundary later and Perera had almost single-handedly completed one of the greatest and most unexpected run chases in the history of the game against a genuinely outstanding attack.

The great Dale Steyn, armed with a new ball, at the business end of a run chase would’ve probably intimidated the bravest of batsmen on their best of days, but Perera was boss on the day. With 13 still needed to win, Perera mauled a length ball well over the boundary rope. This was a batsman in the midst of the outstanding performance of his career, focusing on nothing but the task at hand.

Decade in review series is brought to you in association with Perry designers of distinctive club blazers made in Yorkshire since 1946.