Kevin O’Brien put on a fantastic display of power-hitting to help Ireland secure an unlikely win against England in the 2011 World Cup. Jo Harman looks back on the fastest century in World Cup history.

“Every now and again someone wakes up and simply has the best day of their life,” wrote Graeme Swann in his autobiography. “Kevin O’Brien was that guy against us.”

Ireland looked cooked at 111-5 in reply to England’s 327-8 when the beefy Dubliner decided to chance his arm. Five days earlier, in Ireland’s World Cup opener against Bangladesh in Dhaka, O’Brien had holed out to deep square-leg on 37 when the game was in the balance, the underdogs eventually losing by 27 runs. This time there was no pressure, no expectation. Just a chance to have some fun.

O’Brien, sporting pink hair in support of a cancer charity, had a lucky escape early in his innings, almost taking his arms out of their sockets as he edged a thunderous drive through third-man for four. But he began to settle against the left-arm darts of Michael Yardy, dispatching him for two boundaries in three balls. Two enormous heaves disappeared over the leg-side boundary in the next over from Swann and a nagging headache started to develop into a full-blown migraine for England.

A swatted six off James Anderson brought up O’Brien’s half-century from 30 balls, the quickest in Ireland’s history, and as his confidence grew he started to unfurl booming drives through extra-cover. “He’s murdered that through the off-side… literally,” said Mark Nicholas on commentary as Yardy was crashed to the ropes yet again.

“I remember I got out to a horrific slog-sweep off Swanny and I was sitting with Joycey [Ed Joyce], who’d just been out stumped, in the dressing room cursing our luck,” recalled Niall O’Brien, Kevin’s older brother. “We sat inside for half-an-hour and kept hearing people shout ‘Shot!’ and then all of a sudden Kev had 30, then he had 40, 50… Some of the shots he was playing, putting Jimmy Anderson 20 rows back… and then Anderson and [Matt] Prior trying to sledge him and Kev giving it back twice as good! It was just unbelievable. The type of innings you probably won’t ever see again.”

A chip into the leg-side for a couple took O’Brien though to an extraordinary century from 50 balls – the fastest in World Cup history. When O’Brien was finally dismissed for 113 in the 49th over, he’d hit 13 fours and six sixes in an innings of unadulterated mayhem. 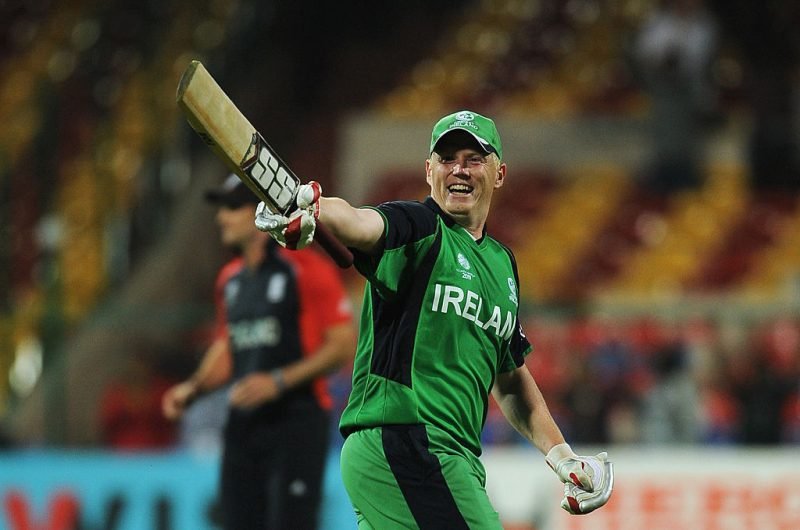 In an innings of unadulterated mayhem, Kevin O’Brien brought up his hundred off just 50 deliveries

“I remember at one stage looking up and I was 80 off 40 balls and I was like, ‘Where did that come from?’” said O’Brien. “It was pretty surreal. I didn’t have any clue what the record was at the time. I didn’t know until after the match.”

John Mooney’s boundary from the first ball of the 50th over completed a breath-taking three-wicket win, Ireland’s latest prize scalp on the way to securing Full Member status in 2018.

If O’Brien’s knock started out as a bit of fun, Anderson’s seventh over was when it got serious. After having his third delivery inside-edged down to fine-leg for four, the England seamer’s attempted yorker turned into a half-volley and was creamed through the covers, O’Brien holding the pose as the ball zipped across the dewy outfield and over the boundary rope. Two balls later Anderson was deposited over mid-wicket for the biggest six of the tournament up to that point. The chase was on.