It was just the start. Taha Hashim revisits Mitchell Johnson’s nine-wicket haul against England in the 2013 Brisbane Ashes Test.

“It felt like it was my first Test again, in a lot of ways,” Mitchell Johnson later said. “But I also felt like I was more ready.”

He’d bowled to the left and he’d bowled to the right. And then he’d been forgotten, consigned to being the man who could be dangerous one day, hapless the next. The grind had taken away the venom.

But time away from international cricket let him find his way back. Standing at the top of his mark at Brisbane, Johnson was a different bowler to the one that had given the Barmy Army so much joy on England’s previous tour of Australia. His run-up – thanks to Dennis Lillee – was longer. The action appeared more rhythmical, and the mind was more resilient.

It took some time to convince, with little to shout about from the first three overs that went for 15. Here he was, same old Johnson, a punching bag for the English. It was the arrival of Jonathan Trott to the crease that allowed him to settle. Trott had felt the heat of a new and improved Johnson in an ODI series months earlier, and he gave the bowler the boost he needed with a tickle down the leg side to Brad Haddin. Johnson was up and running in the series that would be his. 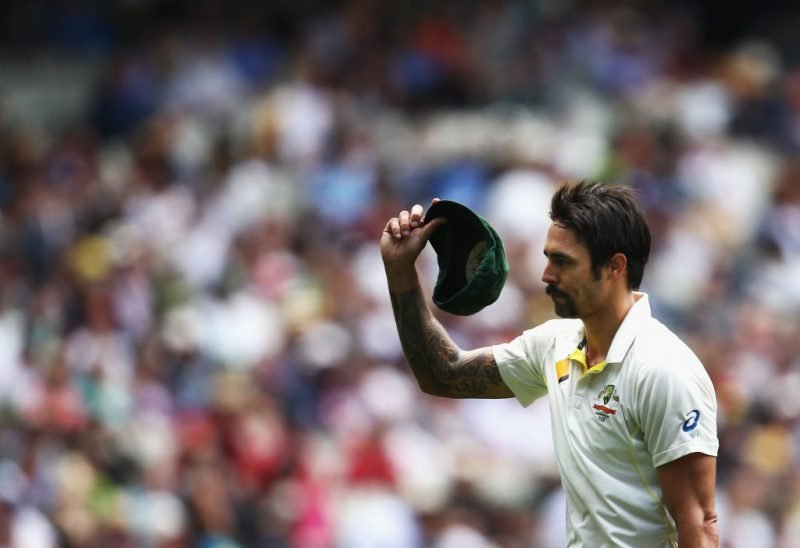 Johnson captured 37 wickets at 13.97 in the series, spearheading Australia’s 5-0 whitewash of England

Michael Carberry could do little about the ball that came from around the wicket, leaving him tucked up with nowhere to go, before Nathan Lyon’s two wickets in two balls had the Gabba roaring like never before. Johnson added Joe Root and Graeme Swann to his collection, and England had been warned of what was to come.

Related Story: Quiz! Every batter dismissed by Mitchell Johnson during the 2013/14 Ashes

Of course, Brisbane was just the beginning of something special, not an aberration like his nine-for in Perth three years earlier. Adelaide would prove to be magical and, with that iconic moustache, there came the recognition that this one-time laughing stock was now some sort of evil genius. His 37 wickets in the series came at just 13.97, and by the time he called it a day in 2015, Johnson’s legacy as one of Australia’s greatest quicks was sealed.

Brisbane was where he was reborn.

Johnson comes around the wicket and it’s the dream short ball. Stuart Broad can’t get away from it. It’s coming for him. It’s 91mph and arrowing in on the armpit, and Broad can only give Haddin catching practice with the glance behind. “This is nasty stuff from Johnson”, says Michael Slater in the commentary box. It’s nasty for the rest of the Ashes.