Mitchell Johnson’s remarkable resurrection in the 2013-14 Ashes began with the Brisbane Test, and continued into Adelaide, where his 7-40 yanked the heart out of England’s batting. Phil Walker describes the spell that took England years to recover from.

First there was Brisbane, fast bowling from the end of days. Johnson had the pitch, the grievance, and the tools. Bloodlust was in the air. Kevin Pietersen sat watching the opening blitzkrieg with his pads on thinking he was going to die.

Australia batted first; England dropped catches. Ben Stokes, on debut, saw his first Test wicket chalked off after he was caught overstepping. Michael Clarke, bafflingly runless in the last big Ashes, harboured his own grievances: he made 148. It was hot. But yes, it was slow, and it was flat. Flat.

The truism that England’s haunted hordes hadn’t dared consider was the old fast bowler’s line that when it comes to pitches, there is no such thing as a flat one.

Johnson didn’t need a quick pitch to do his bidding. He just needed to harness the devil that at times lurked a little too deep for his liking, and partner him up with the physical traits that once moved Dennis Lillee to proclaim him a “once in a generation” fast bowler.

Shortly before the close on the second day, Lucifer got things rolling with one of the balls of the decade to clean-bowl Alastair Cook, but if that delivery was the perfect conflation of the fast bowler’s art, his spell on the third day sustained the impression across the best part of two hours.

It came just after lunch. England emerged after the break into the 51st over of their innings, four wickets down and Stokes new to the crease. By the second ball of the 69th, they’d been blown away.

They lost six wickets in that session, and Johnson took them all. First to go was Stokes (1), pinned leg-before and confirmed on review. Prior (0) was next, roughed up and nicking off. Immediately after, Broad (0) was bowled round his legs avoiding the bouncer that never came. 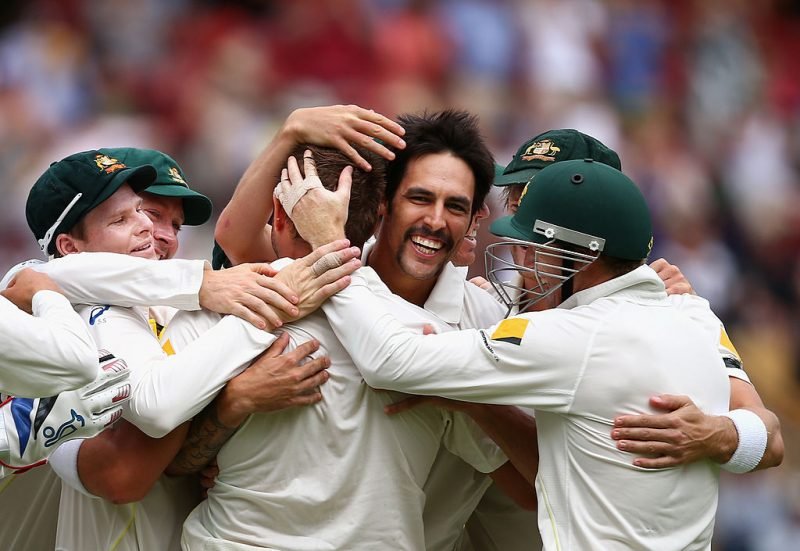 All of this took place in a single over.

Next up was Swann (7), flashing wildly at a wide tempter. Anderson was then cleaned up first ball – make that two lots of two-in-two, and a spell of five for two overall – before, finally, after a faintly surreal partnership of 37 with the serenely untroubled Ian Bell (72*, four sixes), Monty Panesar (2 from 35 balls) was castled by one last inducker.

Some preferred Brisbane, others chose Adelaide. I was there for both. Nothing tops Brisbane for vengeance. Nothing beats Adelaide for skill.

Related Story: Quiz! Every batter dismissed by Mitchell Johnson during the 2013/14 Ashes

By the end of it, Johnson had taken 17 wickets in four innings. England had been ripped apart so badly that it would take years for them to stitch back together.

As for Mitch, no more songs. No more wind-ups. Just the desperate hush of terror when he ducks into his run.

Cook had been stuck in the field, watching the misery deepen, for 158 overs and 634 minutes spread across two days. Adelaide, until then, had been reasonably even-tempered, but in the heat of the evening on day two, it turned loud and loose. Johnson’s first over is fast and invariably short, Cook prodding the odd block with limited success. His fifth ball is a 95mph bumper; leg slip moves into place. Johnson’s ninth seams away. Cook dabbles, misses. His tenth is the haymaker. Cook is rooted in the crease, his feet on gardening leave. The ball arrows towards his leg-stump before somehow shaping away from his dangled edge to crash into middle and off. All in the space of 0.4 seconds. One of the great balls of the decade.