Australia were down and out. Then Mike Hussey did his thing. Taha Hashim revisits a miraculous semi-final masterclass.

The bear hug with Mitchell Johnson was emotional. The roar was a concoction of shock and ecstasy. The heist was one for the ages.

Michael Clarke was gobsmacked. “It was just a freakish performance from an unbelievable cricketer,” said the Australia captain. Somehow, his side’s time under the Caribbean sun wasn’t over. 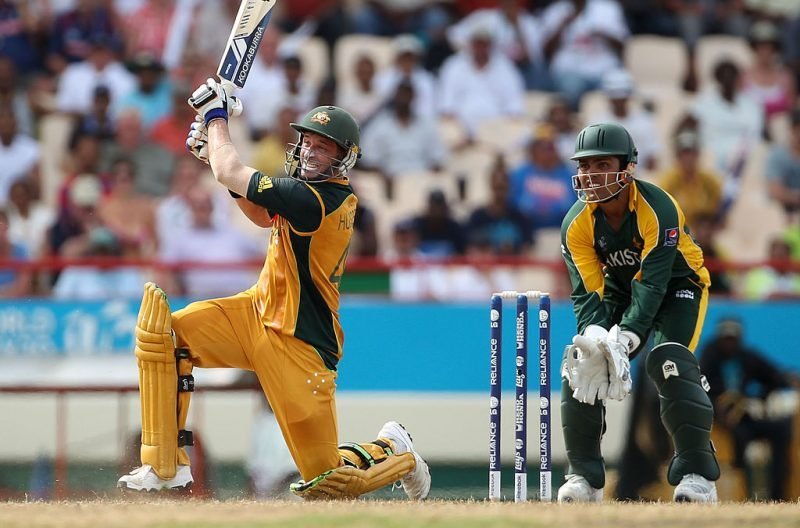 Nearly 10 years on, sixes fly by and no-one bats an eye. The mind has been conditioned to take in obscene batsmanship. And yet Clarke’s words still stand.

At 105-5, with his brother walking back for 13, Mike Hussey makes his way to the crease; Australia pray for divine intervention. They need 87 runs from 45 balls, and a place in the World T20 final beckons for Pakistan, the reigning champions.

Having acted as Australia’s lead finisher in their run to the semi-finals, Hussey has form on his side. Unbeaten knocks of 47 and 39 – against Bangladesh and Sri Lanka respectively – have helped build match-winning first-innings scores but even for a man of his skill and experience, this seems out of reach. What follows is godlike.

He doesn’t pummel the leg side; he obliterates it. The swivel pull off Shahid Afridi kicks things off and two overs later Saeed Ajmal is punished for the first time, a hoick sailing over deep backward square-leg. A couple of boundaries come off Mohammad Amir in the penultimate over, but the task remains an uphill one: 18 from six.

Ajmal, capable of leaving any batsman in a daze with the magic of his doosra, returns. Hussey’s method strips away the complications of the game. He doesn’t look like the seasoned pro playing for both pride and paycheque. He looks like the child in the backyard, living for the thrill of feeling bat on ball. The eyes watch and the hands swing away. Six. Six. Four. Over midwicket. Over long-on. Over backward point.

“A single will do”, says Harsha Bhogle as Ajmal arrives for what will be his last delivery. Hussey is possessed, incapable of not finding the boundary. A single won’t do. Six. Over cow corner.

The hug, the roar, the heist.

Before the carnage of the final over, there’s this thing of beauty. It’s not a rollicking six. It’s Hussey with all his elegance, all the wisdom of his 34 years, turning a yorker into a full toss, guiding Amir to fine leg for a four with touch, not power.

He knows the line and length of the ball before Amir does. It’s a man playing the innings of his life, toying with a boy. It’s a sign of what’s to come.