Even as the cricket world had its eyes trained on a global ICC tournament, ace Afghanistan spinner Rashid Khan produced his career-best one-day performance to flatten West Indies with an array of googlies. Akshay Gopalakrishnan recalls the remarkable performance.

Even as Bangladesh stunned New Zealand to pick up a famous victory in the 2017 Champions Trophy, away in St Lucia, Rashid Khan was having a party of his own. If the Champions Trophy was the crazy hotspot, with the world’s eyes trained on it, Rashid’s was the quiet private party.

Blanked 3-0 in the T20Is that preceded, Afghanistan desperately needed to give a good account of themselves. The start to that pursuit wasn’t too encouraging, as they limped to 212-6, that too courtesy a late surge from Gulbadin Naib, who blasted a 28-ball 41 in the slog overs.

West Indies lost their openers within the first hour or so of their reply, but at 68-2, were well on course to taking the lead. Then, Rashid came on for the 23rd over, and in two balls, showed why he is Afghanistan’s lynchpin. With his first two balls, he sent back Jason Mohammed and Roston Chase, and all of a sudden, 213 seemed like a mountain in front of West Indies. 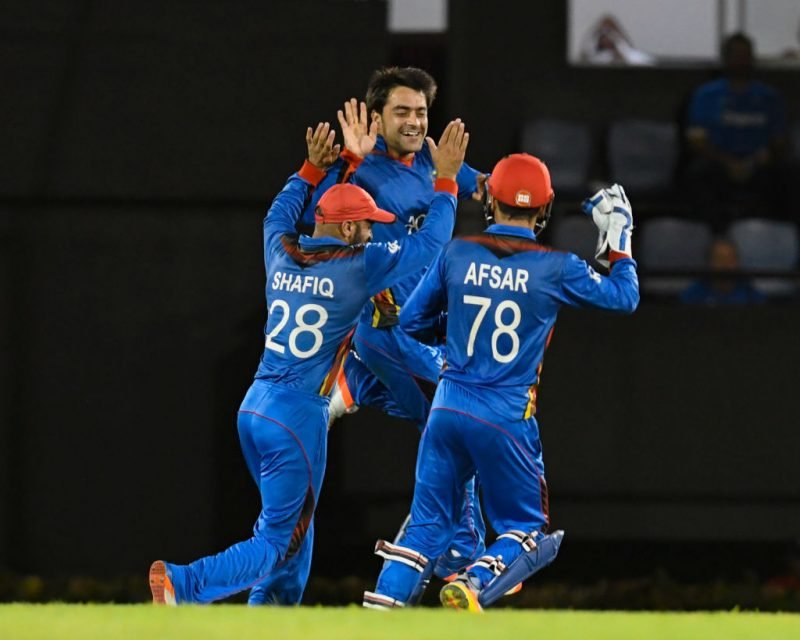 Rashid Khan rejoices with teammates after picking up a wicket

In a remarkable performance, Rashid was on a hat-trick again in his second over, and at 70-6, West Indies’ hopes were rapidly fading away. The first four wickets cost just one run for Rashid, and that run too had only gone into his account because of an iffy wide call from the umpire, with the ball ricocheting off Jonathan Carter’s back leg before skipping down the leg side.

With the choke on, Rashid was relentless, completing his five-for within his first four overs. He ended his first spell with staggering figures of 5-13 – his second five-for in ODIs – in six overs. He would later return to fizzle out whatever little remained of the West Indies innings, dismissing the last two men, Alzarri Joseph and Miguel Cummins, on his way to 7-18 in 8.4 overs.

West Indies’ resistance ended on 149 as Afghanistan picked up their first ODI win over an ICC Full Member other than Zimbabwe and Bangladesh. At the time, Rashid had the best bowling average [15.05] and strike-rate [22.3] for any bowler with at least 50 wickets. While the strike-rate has dropped below that of others since, the former record stands, although the number has gone up to 18.54.

On a day in which he destroyed West Indies with an endless stream of googlies, wickets off leg-breaks were such a rarity. It was one such delivery that accounted for Shai Hope. Even as the batsman fished at the ball nervously, with no feet, perhaps expecting another wrong’un, the ball spun away and shaved the outside edge as it did so. What followed was a thing of beauty, as Mohammad Nabi got down to his left in an instant at slip, showcasing his extraordinary reflexes, to pluck a sensational catch. It sent back West Indies’ top-scorer for 35 and truly opened them up as they lost three wickets, which would become four eventually, for two runs.