When the chips were down and the stakes were high, a young Virat Kohli produced a scintillating knock that was an early sign of his genius in a chase. In Wisden’s decade review, Rupin Kale reflects on his once-in-a-generation performance.

Exhibit A, 19 September 2010: A 21-year-old walks in with Royal Challengers Bangalore at 100-4 in the 14th over in a 166-run chase against Mumbai Indians. He turns the game with a 24-ball 47. He engages in a thrilling battle with Lasith Malinga in the penultimate over, smacking him for three consecutive fours. With three runs needed off the final ball, though, he skies one into the air, and is caught by Ambati Rayudu. The youngster’s hopes are crushed. The result: A two-run defeat.

Exhibit B, 24 June 2010: The youngster walks in at one-down for India in the Asia Cup final. He builds a 62-run stand for the second wicket with Dinesh Karthik. However, just as he settles in with a 34-ball 28, he goes chasing after a wide bouncer. He ends up edging it to the wicketkeeper. The bowler: Lasith Malinga.

Exhibit C, 2 April 2011: The batsman, now 22, walks into the biggest game of his career, with India at 31-2 in the World Cup final. He stitches a crucial 83-run partnership with Gautam Gambhir, contributing 35 runs in 49 balls. He is dismissed the 22nd over, with the game still in the balance. The opposition: Sri Lanka.

A packed Eden Park, at the World Cup, against overachieving neighbours Australia. And the winner would also be awarded the Chappell-Hadlee Trophy.

How Trent Boult delivered! @RD_Wisden on Wisden's No.5 Men's ODI spells of the decade ?https://t.co/Ai7NRcMVTW

As Virat Kohli trod into the middle in a must-win game in Hobart just three months after his 23rd birthday, was he thinking about these scenarios? So many times he had got close to playing a deciding knock for his team, without quite going all the way.

At that point, India were struggling in the tri-series, needing a miracle to stay afloat: They had to chase down Sri Lanka’s 321-run target in 40 overs or less. In an era when 350-plus ODI totals were still an anomaly, India pulling this off seemed improbable.

Joining Gambhir at 86-2 in the 10th over, Kohli played an innings that redefined his role in the national side. There are knocks where ordinary players play out of their skin to produce unprecedented success, and then there are knocks where extraordinary players take their first steps towards greatness. This effort was the latter. His 133* off 86 balls, which took India past the finish line in just 36.4 overs, is a tutorial on how to chase a target. He paced his innings to perfection, ran like a panther between the wickets, and had clearly learnt from past mistakes. 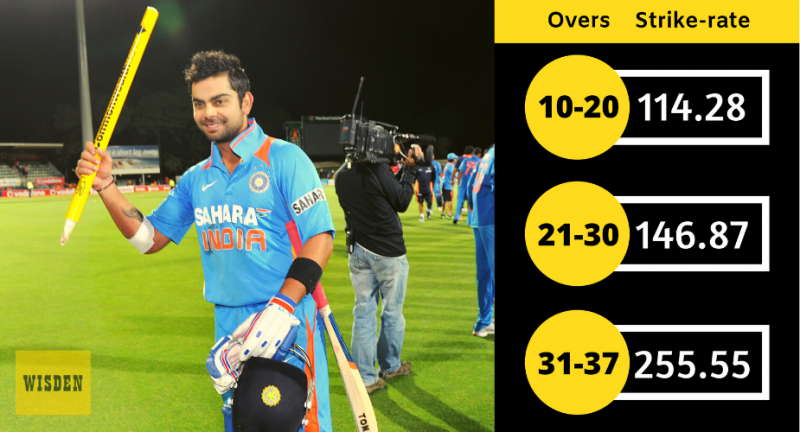 Kohli, who had scored just one hundred in nine innings against Sri Lanka till then, made his intention clear from the first ball: As Malinga missed the yorker by a whisker, the batsman used his wrists to flick the ball to deep midwicket, collecting an early boundary.

He remained cautious till the 24th over, recording his third fifty of the series in 44 deliveries. Gambhir was solid at the other end, as the pair added 115 for the third wicket. After his partner was run out in the 28th over, Kohli switched gears, scoring three fours in as many overs. As soon as the 30th over was bowled, he turned into a different beast. He tonked Nuwan Kulasekara for four fours in the 31st over, uncovering a new layer to his mastery in chases. Raina played the perfect second fiddle, as India raced to 279-3 in 34 overs.

What happened next took everyone’s breath away. Kohli was two runs away from a career-best century, and steaming in from the other end was Malinga.

The onslaught all but confirmed a miraculous result for India, who after that point required just 18 runs in five overs to remain alive in the series. They reached the target with 3.2 overs to spare. Kohli smashed Malinga for consecutive boundaries to seal the win, overcoming his past demons in grand fashion.

Having conceded 64 runs off 6.1 overs, veteran Malinga looked unnerved against the young prodigy, who had just crossed three figures. He bowled full and on the pads, only for Kohli to pick it up nonchalantly with a flick of his wrists. The ball sailed over the Sri Lankan fielders to be deposited into the crowds behind deep square-leg.

There was a new sheriff in town.