Less than three months after ending the Ashes with a series average of 9.50, David Warner has roared back to form with his second consecutive 150+ score, converting it into his maiden triple century in Test cricket.

Warner finished at 335* after captain Tim Paine decided to declare the innings, leaving his side with an imposing total of 589-3.

His is the second-highest Test score by an Australian, only after Matthew Hayden’s 380. His final run of the innings moved him past the highest scores of Donald Bradman (1930) and Mark Taylor (1998).

Highest Test scores by an Australian 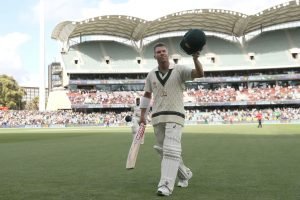 Warner began the day on 166, and went on to bring up his second double century in the 11th over of the day. On 254, he went past his previous best Test score and the highest score by an Australian opener since Hayden’s 2003 knock against Zimbabwe.

He also became the third Australian, after Bradman and Clarke, to hit more than one 250+ Test score.

It was also the second triple century with the pink ball, and now the highest score in a day-night game; Azhar Ali had hit an unbeaten 302 against West Indies in 2016.

Warner found the ideal company in Marnus Labuschagne, with whom he stitched a 361-run stand, the second-highest for Australia for the second wicket, only behind Bradman and Bill Ponsford’s 451-run marathon against England in 1934.

Warner wasn’t the only one breaking individual records; on the way to his 63-ball 36, Steve Smith overtook Bradman’s run-tally of 6,996 Test runs, and soon became the fastest batsman to 7000, in terms of innings. Playing in his 126th innings, Smith eclipsed Walter Hammond’s 131-innings record set 73 years ago.