We’re only a few weeks away from the start of the English Test summer. Ahead of the two-Test series between England and New Zealand, CricViz analyst Rufus Bullough looks at the data and devises a bowling plan for two of New Zealand’s most consistent run-scorers.

With the justified postponement of the IPL, our attention at CricViz has turned over to the upcoming bumper Test match summer, and the mouthwatering prospect of four months of enthralling red-ball cricket.

To kick the summer off, England will face the Kiwis in a two-Test encounter starting on June 2 at Lord’s. New Zealand’s main threats with the bat will be their captain Kane Williamson, who will be ably supported by his vice-captain, Tom Latham; at the time of writing, 37-year-old Ross Taylor remains an injury doubt for the tourists. Here, we take a deep dive into their records and recent numbers in an attempt to try and unearth some potential tactics that can be used to unlock the Kiwi top-order.

This is the wicket that bowlers will be prizing above any other. The New Zealand captain plays with immense control and patience. He defends good balls resolutely, and plays within himself to rotate the strike and plunder boundaries against balls that err slightly off line or length. Of the 15 batsmen to have scored 1,500-plus Test runs since the start of 2018, none have done so at a better average than Williamson (67.89) or a lower false shot percentage (9.5%). 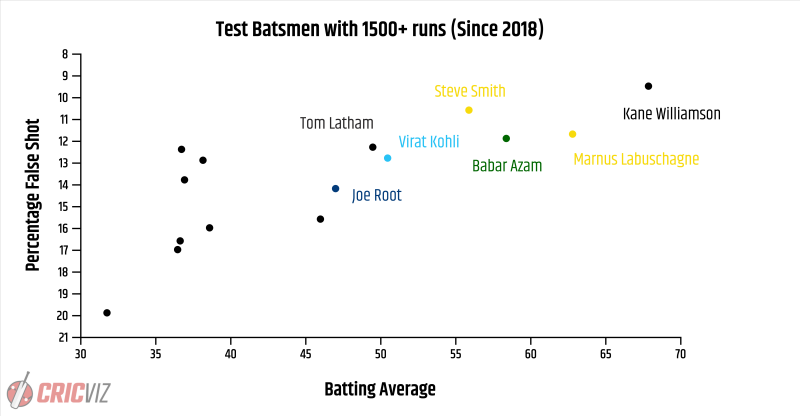 By his own incredibly high standards, a Test average of 30.87 in England is slightly underwhelming, but eight innings is a rather small sample size to construct a fully formed judgement. Williamson is no stranger to English conditions – he has enjoyed successful County Championship stints with both Gloucestershire and Yorkshire over the years – and will be relishing the opportunity for some time in the middle against a skilful English attack before facing India at the end of the month.

Across his 11-year Test career, he has been ruthless against the short ball, scoring more runs against this length than any other, at an average of 60.29. Since 2018 however, his short ball numbers have taken a slightly worrying turn. On average, Williamson is dismissed on average every 90 short balls faced, but in the past two and a half years this figure has fallen to a dismissal every 60 balls. This may still seem like a lot, and you would be right to think that compared to the typical Test batsmen, but when compared to his balls-per-dismissal for other length groupings since 2018 (full: 231 & good length: 187), you can see that the short ball could be a good weapon for pace bowlers, and has been over recent times.

A word of warning to fast bowlers however. The main plan of attack to Kane should not be exclusively short balls. Not in England. That tactic should be used sparingly when the ball isn’t moving lavishly, but still remains a good option. The main plan of attack should be swing bowling – more specifically, away swing. Since the start of 2018, Williamson has been dismissed nine times by away swinging deliveries for an average of just 21.77. His average to in-swingers and non-swinging deliveries in the last two and a half years is well north of 100. 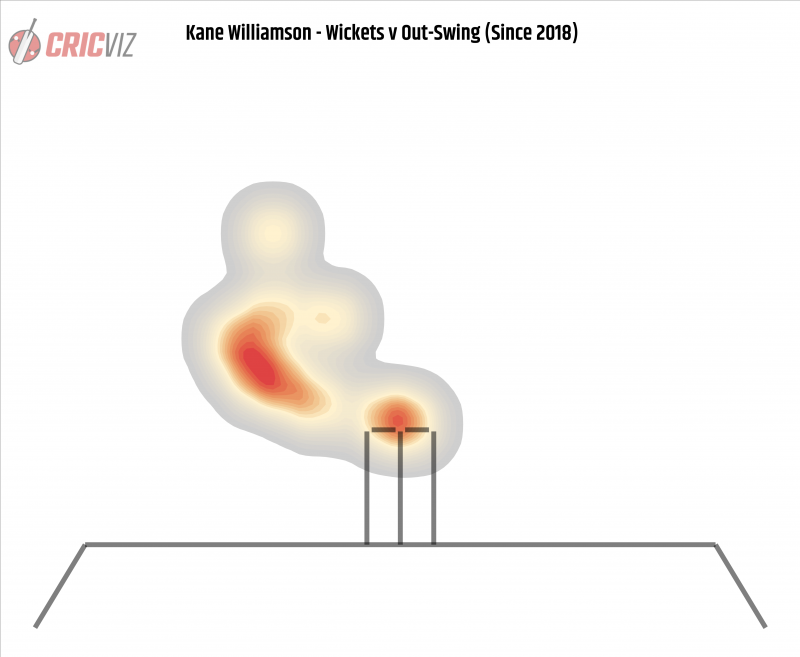 If seam bowling fails to dismiss the New Zealand captain, left-arm orthodox should be the go-to option to hold up one end. Across his career, Williamson’s scores at 2.90 runs per over against slow left-arm bowling, which is his slowest scoring rate of any bowling technique. Since the start of 2018 he has dominated deliveries spinning into him, scoring at a shade over 4 runs per over with an average of 111.66. Left-arm orthodox is therefore the best option to slow his scoring rate and provide a build up of pressure which may lead to a potential breakthrough from either end.

Latham knows English conditions rather well. He may have only played two Tests on these shores, but successful County Championship spells for Durham and Kent mean that he averages 47.86 in red-ball cricket in England from 34 innings.

Since the start of 2018, only Dimuth Karunaratne has scored more Test runs opening the batting than Tom Latham’s 1,634. Of the nine openers to have scored 1000+ runs in the same period, only Rohit Sharma has a higher batting average than Latham’s 49.51. These numbers confirm what most of us know already, that Latham is a top class opener right at the top of his game. Keeping him quiet and dismissing him early is going to be vital in keeping a lid on the Kiwis.

Unlike when bowling at his skipper, the short ball is something that should be avoided at all costs when bowling to Latham. He is a left-hander who uses the depth of his crease to great effect, and with minimal footwork, a still head and a solid base to operate from, he has been in red-hot form against short pitched deliveries since 2018. He averages 118.33 and is dismissed on average every 262 balls pitching shorter than eight metres. 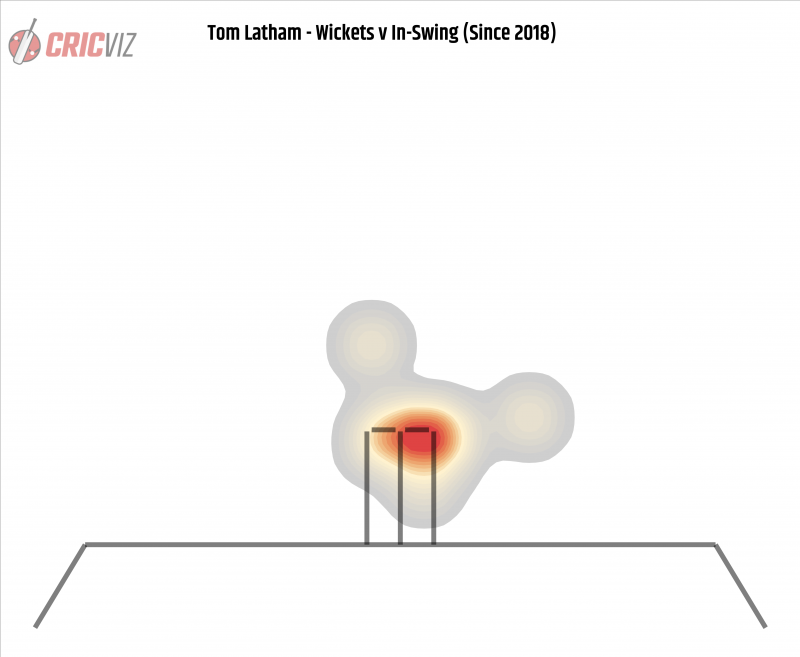 His strength against the short-ball does open up an opportunity, however, for bowlers brave enough to pitch the ball up and get it swinging. His depth in the crease and lack of foot movement mean he does sometimes struggle with balls swinging back into him. Since the start of 2018, Latham averages just 17.62 against in-swingers. He is far more comfortable against out-swingers (avg: 40.00) and balls that do not swing (avg: 67.37). Target the stumps and pitch the ball up, simple. 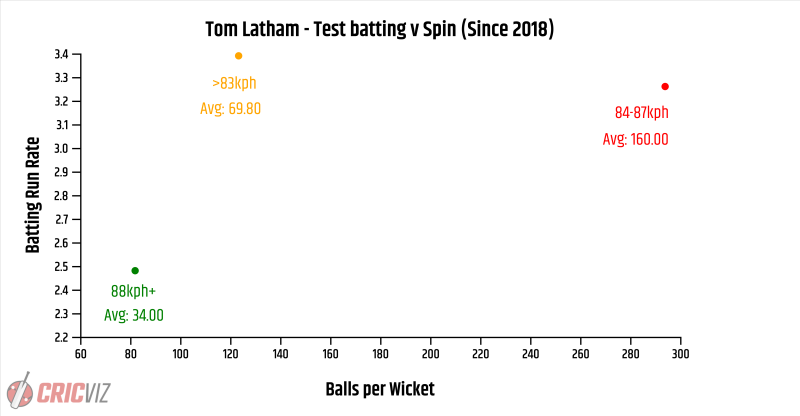 Latham has an excellent record against spin with a career average of 60.08 against the slow bowlers. He uses his sweep shot to great effect, and has scored over 250 career runs from this shot alone and averages 65.00 runs per dismissal. He uses his feet often and has only been dismissed once while doing so. The best way to keep Latham quiet is for spinners to push the ball slightly quicker than normal. Since 2018, at speeds above 88kph Latham’s scoring rate drops below two and a half runs per over, and his average to just 34.00. Anything slower than 88kph sees a big jump in his scoring rate and balls per wicket.