CricViz analyst Ben Jones dissects the brilliance of India’s Suryakumar Yadav, and tries to work out how England can stop him.

We are in the midst of an historic T20 World Cup campaign for Suryakumar Yadav. He has 225 runs in just 116 balls, averaging 75, striking at a sniff under 200; for a tournament defined by new-ball movement and middle-order recoveries, his batting prowess stands out. With the notable exception of the Pakistan game, every India match has seen Suryakumar take apart the opposition attack with a beguiling blend of classical strokeplay and ultra-modern unorthodoxy.

Shot after shot after shot from ‘SKY’s bat have left crowds in awe. A whip for six behind square off Anrich Nortje; a flat-bat four off Kagiso Rabada, on the walk, bang in the V of the V; consecutive, freakish scoop-slash-flicks off Richard Ngarava. Blighted by rain, it’s been a World Cup of both the greatest frustrations and the greatest joys coming from the same source – watching SKY.

CricViz: Suryakumar Yadav has had the most impact of any batter at the T20 World Cup

For more casual fans of T20 cricket, this dominance will have been something of a surprise. Suryakumar has only forced himself into the India side in the last 18 months, and given the BCCI’s stance on player involvement in overseas leagues, if you didn’t watch the IPL, you didn’t watch Suryakumar. And yet if you’ve caught even the briefest glimpse of his batting in recent years, then these displays of swaggering, cocksure brilliance won’t have shocked you in the slightest. Since the start of 2019, Suryakumar has the highest average Batting Impact of any T20 batter on the planet.

CricViz: Suryakumar Yadav’s record is the best in the world

His more extravagant traits are underpinned by a technical resilience which sets Suryakumar apart from the less substantial, glass-jawed hitters. Right now, he’s one of roughly 20 players in the history of this format to have a positive average Batting Impact against all five main bowling types. Even for the absolute elite, there is normally one option which opposition captains turn to: Buttler and leg-spin, Kohli and finger-spin, Maxwell and high pace. But not SKY. You can overwhelm him with individual quality, but it’s hard to beat him with captaincy and planning. 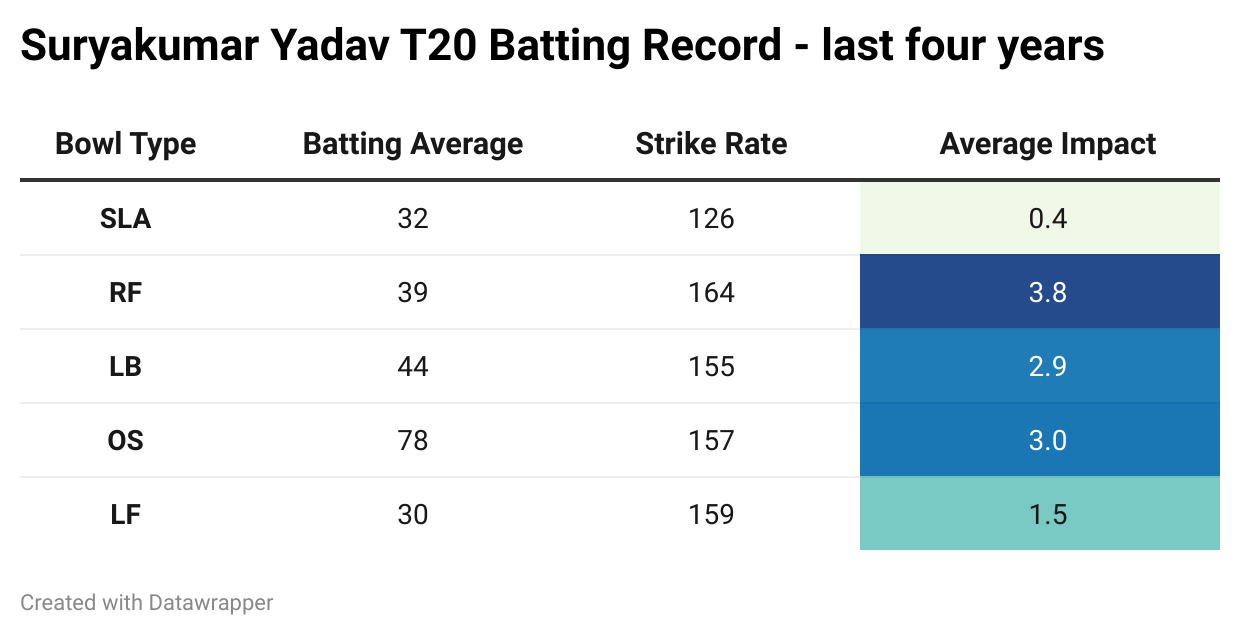 CricViz: Suryakumar Yadav has a good record against every bowling type

T20 is inherently a game of trade-offs, of compromise. If you want more security from your middle order, you bring in an anchor, but at the cost of power-hitting. If you want more explosiveness, then you risk a collapse. Almost every player on the planet, even the best in the world, speak to this debate. But not Suryakumar. His inclusion is no compromise. He maintains that ability to play long innings, to deal with the traditional ‘red-ball’ threats to his wicket, but he matches it with unerring aggression, a relentless commitment to attacking intent. Statistically, Suryakumar is the fastest starter in the middle overs ever in T20, arriving to the middle and getting stuck in from ball one. It’s laughable how often he hits his first ball for four. He’s two players in one.

CricViz: Suryakumar Yadav is one of the fastest middle-over starters in history

If we get under the hood, we can see that early intent is often channelled in a very specific way. In his first five balls at the crease, Suryakumar is more likely to sweep than any Indian batter ever. If the man is up in the ring, he’ll sweep with greater precision, knowing placement alone is enough to find the rope. When the man is back, he’ll sweep harder.

What’s more, he’s more than happy to repeat the trick against the seamers, albeit when a touch more well set. On Sunday night against Zimbabwe he leapt wide of the crease against Ngarava and somehow managed to dispatch a six over backward square; only once in the CricViz database has a six been hit in that zone from a ball that wide outside off. Nowhere is off limits.

It was a stroke which evoked another modern genius, with striking similarities to AB de Villiers’ attack on Jason Holder back in 2015. It’s far from the only comparison with ‘Mr 360’ – indeed, Suryakumar has a fair claim on that nickname. He averages 104 with the scoop shot, better than any player in T20 history aside from Quinton de Kock, while his strike rate with the shot (306) is substantially higher than the South African’s (235). When you consider that most of de Kock’s scoops are played in the powerplay, while most of Suryakumar’s are played in the middle with more fielders on the rope and with the importance of manipulating those fielders greater, you can make a strong case that the Indian is the finest exponent of the shot we have seen in the T20 format.

Only two players in T20Is (Mahela Jayawardene and Mushfiqur Rahim) score more runs behind square than Suryakumar’s 48 per cent, and nobody is even close to scoring as fast as him through that area. Most players ignore half the field, the half they can’t see as the ball comes down. At times, it can feel like Suryakumar is simply working with more space than other players. 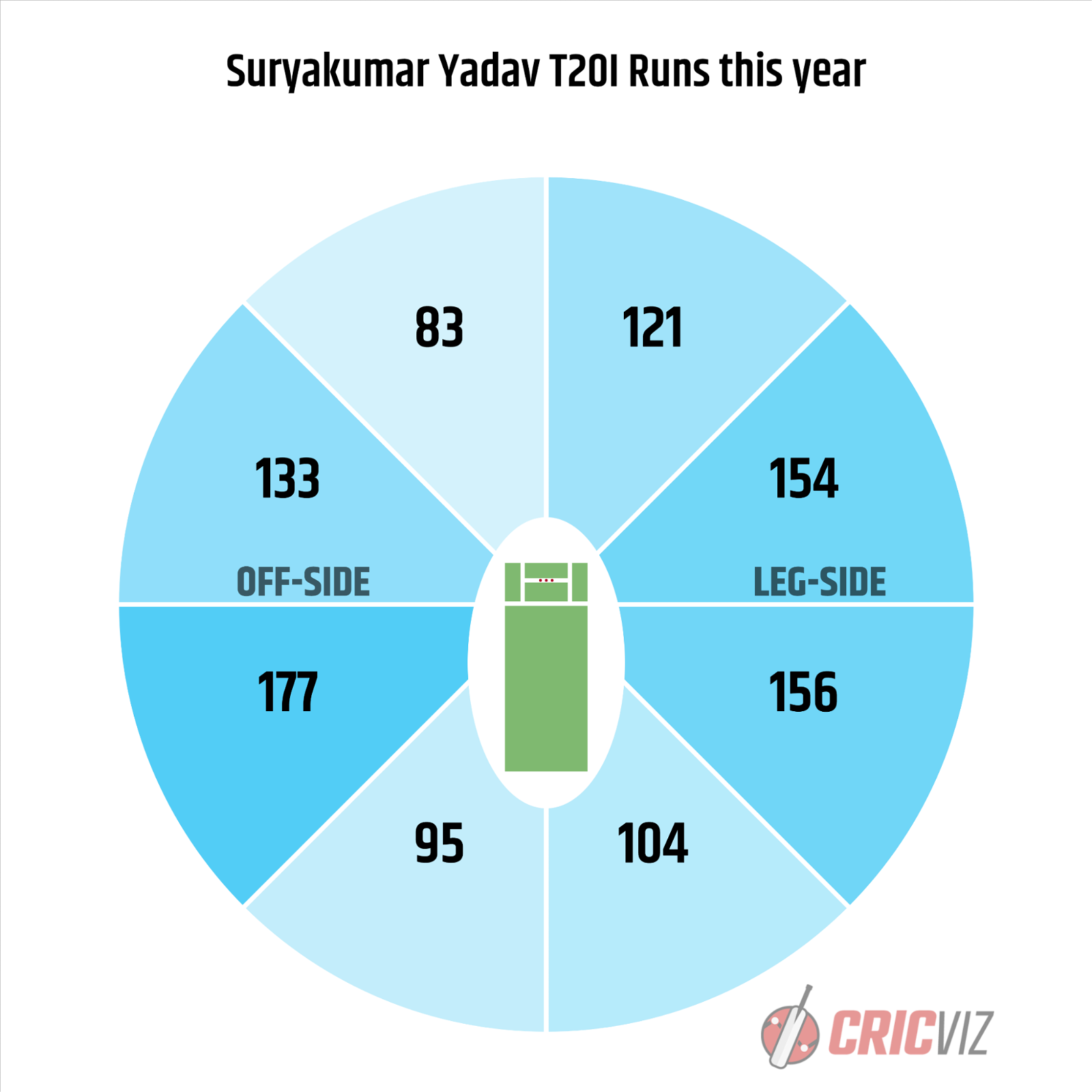 CricViz: Suryakumar Yadav scores all around the ground

His long-term progression has been much discussed. Confrontations, disagreements and prominent and influential critics have delayed Suryakumar’s ascension to the top level of the game, even when his ability fully deserved a greater stage. He has been bunted around IPL teams, pushed into positions others aren’t, rarely given the easier gig of opening. For Kolkata Knight Riders, he batted as low as No.7. In those days Suryakumar wasn’t as complete a player as now, and in part you wonder if these internships up and down the order have contributed to the batter we see today. Rather than the blank canvas of an opening spot, Suryakumar’s game has always needed to be reactive, adapting to the game situation. He’s been asked a lot of questions; right now, he seems to have all the answers.

You can’t enforce him with high pace. He can scoop, he can sweep, and his off-side range is envied by the very best in the world. He starts quickly and keeps scoring quickly, with seemingly minimal risk. So…

How do England stop him?

In terms of simple planning, it’s clearly an immensely difficult task to shackle Suryakumar Yadav. The graphic below shows that, when facing pace, his strike rate doesn’t drop below 130 against any zone of legal deliveries; it shows that he’s highly destructive against straight yorkers, but even more so against wide ones; it shows that short balls disappear as quick as full ones, and only the most traditional of line and lengths limits him. 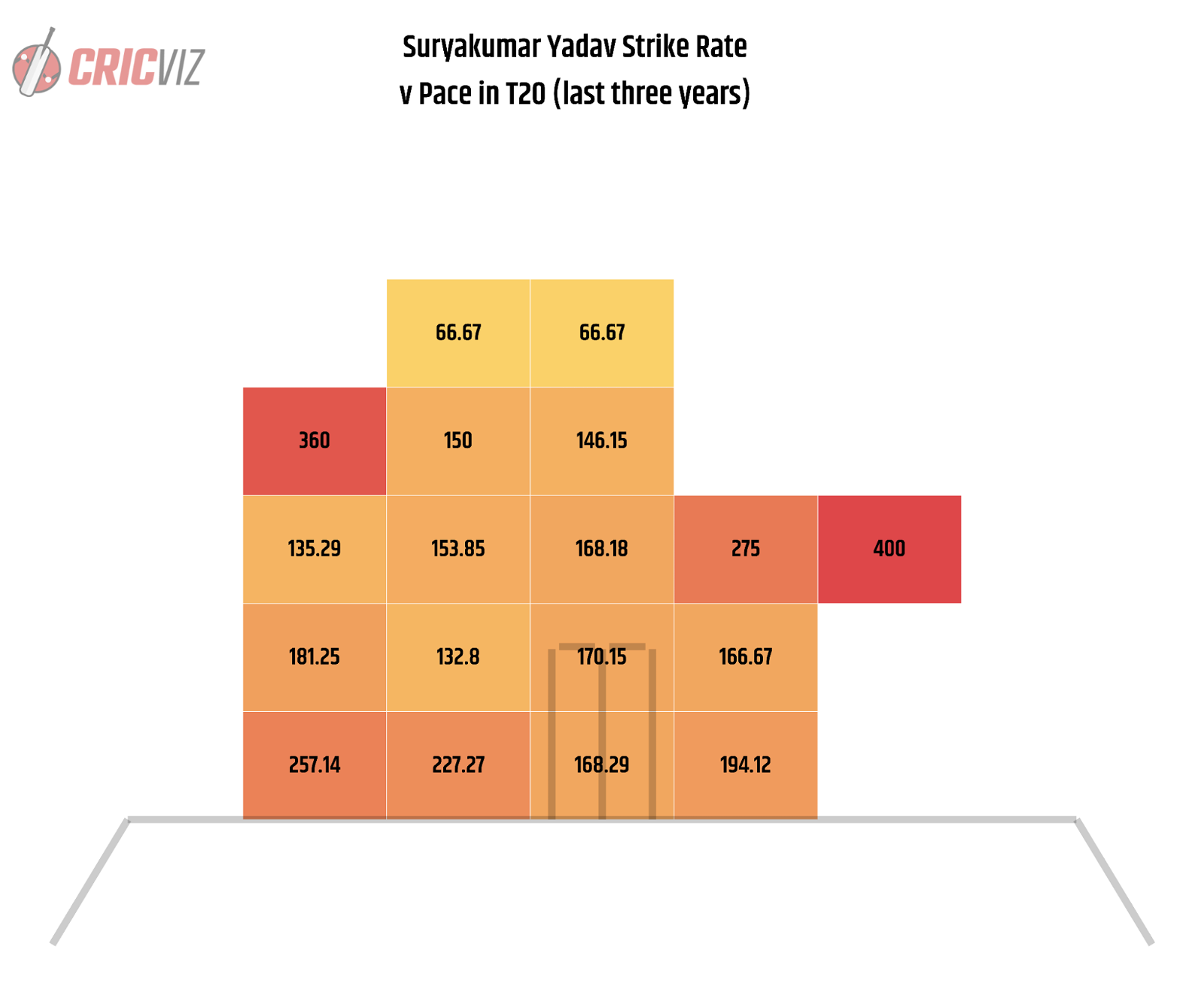 CricViz: Suryakumar Yadav scores quickly against every line and length of pace bowling

With limiting his strike rate off the table, it’s perhaps best to focus on simply getting him out. When you look at Suryakumar’s dismissals early on, they’re unsurprisingly similar to most batters, coming against deliveries around the top of off stump. The difficulty with this traditional strategy is that Suryakumar’s range of strokes against deliveries in that zone makes it tremendously hard to set a field to, even with the luxury of five men out. You can go to classic Test-match line and length, but you can’t go there for long – once he’s set, SKY has as many boundary options against those deliveries as anyone in the world. 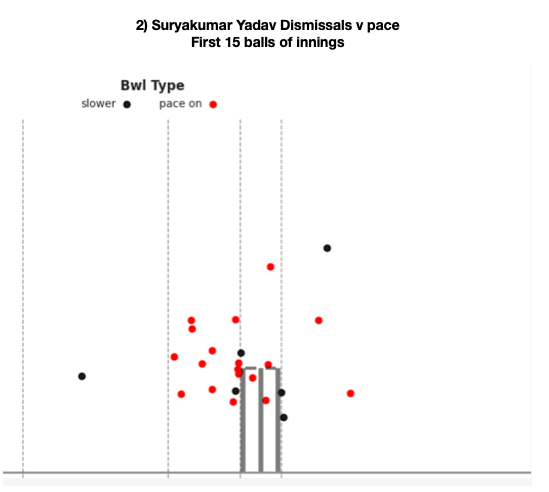 Slower balls are maybe the only consistent option which seems to take wickets, with Suryakumar averaging 27 against them in the last five years. It’s still a high-risk option, his strike rate up above 150, but going pace-off does seem to create chances. Suryakumar’s genius does rely on more than a touch of pre-meditation, and disrupting that is valuable from a bowling perspective.

If one were to go down a matchup route, purely in bowling technique terms, then bringing Liam Dawson into the side would make some sense. While he’s not in the squad currently, if Dawid Malan is fully ruled out then this becomes a viable option, and Suryakumar has – comparatively – struggled against SLA bowlers in recent years, and with the semi-final set to be played on a used Adelaide pitch, there may be more assistance for spin than we’ve generally seen in this World Cup. The return of Rishabh Pant into the India side makes right-to-left spin slightly less bankable, but England have plenty of other bowling options they can turn to if necessary.

Sam Curran has had some success against Suryakumar, dismissing him twice in eight balls and with both dismissals following a clear pattern. When Mumbai Indians met Kings XI Punjab back in 2019, Suryakumar walked across to the off-side and flicked Curran to deep square leg; when England met India at the start of last year, he did much the same, except the chance went to backward square. Both dismissals had the air of a batter trying to take down a weaker opposition bowler, engineering an option where perhaps others wouldn’t, and while you underestimate Curran at your peril, the nature of the dismissals does not feel predictive – especially with the dimensions at Adelaide Oval rewarding that focus on square boundary hitting.

The only other England bowler to dismiss Suryakumar more than once is Chris Jordan, another candidate to come into the side in Malan’s absence. Similarly to Curran, Jordan’s successes follow a pattern, with both wickets coming from short balls into the pitch and at the body, albeit at varying speeds. It’s hard to find the numbers to prove it, but there is a sense that the counter to Suryakumar’s reach and range is a slight weakness to balls closer to him. While he’ll still frequently get his hands through the ball and find the rope, it’s higher-risk, and does at least offer the chance to set a field with a clear plan in mind. Suryakumar’s range of strokes is such that for most deliveries he could get the ball to the boundary in three different ways, to three different spots. Making him more predictable, even if it’s predictably excellent, has its benefits. Away from Suryakumar, the inclusion of Jordan is also playing to conditions, given his preference for bowling yorkers is supported by the long straight boundaries at Adelaide Oval. 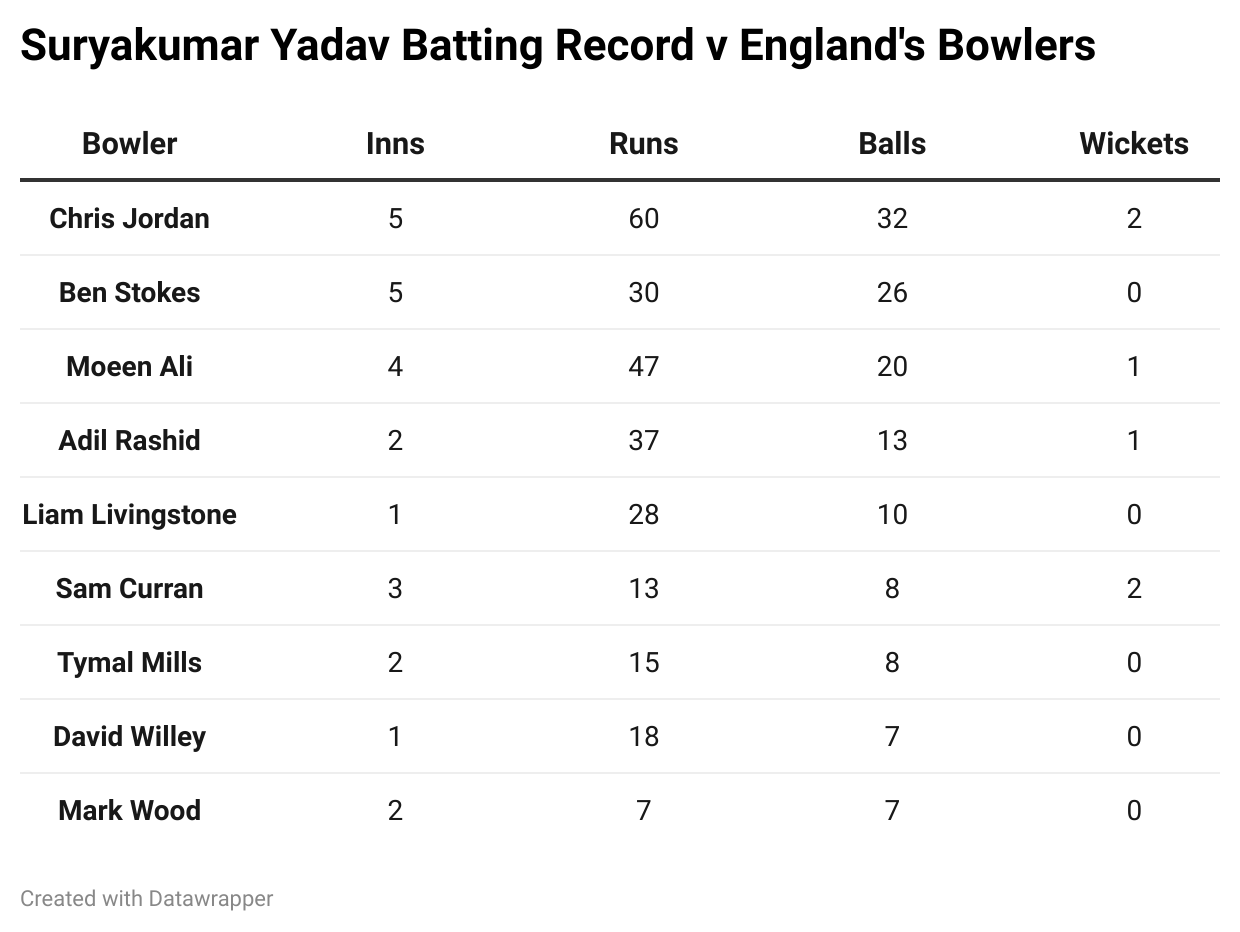 CricViz: Suryakumar Yadav has a strong record against almost all of England’s bowlers

In essence, with the inclusion of Dawson highly unlikely at this stage, England’s plan can be reduced to classical red-ball bowling first up, then either slower balls or hard lengths depending on the strengths of the bowler. If you think that sounds uninspiring, you’d be right; all the analysis, all the numbers, suggest that SKY is essentially without weakness, or at the least without a weakness England can readily exploit. In such circumstances, bowlers have to focus on what they do well, rather than trying to find non-existent chinks in a flawless suit of armour. Try – as much as you can – to embrace the chance to test yourself against the best in the world. Take wickets elsewhere, build pressure, demand more of him. But crucially – cross your fingers, and hope.