The Hundred draft will be the first of its kind in British sport. Here is your guide to what’s happening.

When is The Hundred draft?

The draft takes place on Sunday October 20. The tournament itself will begin next summer, running for a month starting on July 17.

It will be televised live on Sky One, Sky Sports Main Event, and Sky Sports Cricket from 7pm. There will also be a live stream hosted on the BBC Sport, The Hundred, and Sky Sports websites, as well as via Sky Sports’ Facebook and YouTube channels.

How does the draft work?

The teams have been randomly assigned a position from one to eight. They will then make their picks in this order before reversing the order for a second pick. This process continues for seven rounds, leading to each team having 14 players, plus their centrally contracted Test player to make a squad of 15, three of whom will be overseas players.

For each round there is a set value for the players picked, starting at £125k and gradually reducing to a minimum value of £30k. The ‘Local Icon’ players who have already been signed fill up their respective slot. For example, Oval Invincibles will skip their second pick in round one since they have signed Jason Roy for £125k. 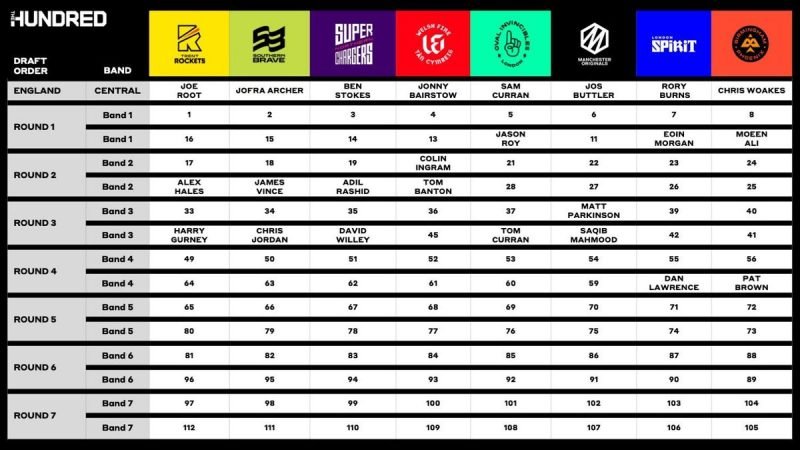 The full list of overseas players and domestic players who have entered themselves into the draft was made public this morning. The list also shows what players have set as their reserve price. The top bracket of overseas players contains Chris Gayle, Lasith Malinga, Kagiso Rabada, Steve Smith, Mitchell Starc, and David Warner. With a reserve price of £125k these players will have to be picked during round one, or else go unsold. However, while the reserve price is the minimum a player can be bought for, they could earn more, if picked in an earlier round.

Most domestic players have elected to place no reserve on themselves. The highest reserve placed by a domestic player was £60k, shared by Joe Denly, Liam Livingstone, Samit Patel, and Mark Wood. This means these four will have to be bought before the end of round four, but they can be picked up in earlier rounds as well. A further seven domestic players have placed a reserve of £50k, and eight at £40k – most surprisingly Gareth Harte. The remainder of the list, containing almost all contracted county players, are available to teams right to the end of the draft.

Who is making the calls?

The picks during the draft will be made by each team’s head coach. These were all named by the time of the official launch two weeks ago, and contain a host of big names such as Shane Warne, Gary Kirsten, and Mahela Jayawardene.

What about the women?

The women’s competition, which otherwise has been run mostly in parallel with the men’s, will have an entirely seperate squad selection process. Instead of a draft, each team will have until May 30, 2020 to sign the rest of their squad behind closed doors.