CricViz analyst Rufus Bullough looks at Dawid Malan’s impressive turnaround from slow starter to a batter racing out of the blocks.

For a long time now, Dawid Malan’s slow starts have been a preoccupation of analysts and T20 obsessives. A frustration for those who view England’s aggressive style in a collective context, not just as seven or eight lads trying to whack it miles, the Yorkshire batter’s placid strike rate in the first 10 balls has gone against the broader strategy of the team and often actively worked against it.

However, this year, that has not been the case, as Malan’s strike rate in the first 10 balls has gone up considerably. Indeed, for the last two years that phase of his innings generally saw Malan score at less than a run a ball, leaving himself a challenge to “catch up” later in the innings and make his overall contribution a positive one.

This year, however, his strike rate in balls 1-10 is almost at 140. That’s really high, even for a man batting in the Powerplay. The global average strike rate in the first 10 for a top-four batter in 2022, is 111, so Malan is comfortably surpassing that at present. Of the batters to have played over 20 innings in 2022, only Sunil Narine, Tim David, Alex Hales and Will Jacks are striking above 150 in their first 10. Malan isn’t far off being one of the fastest starters in the world. 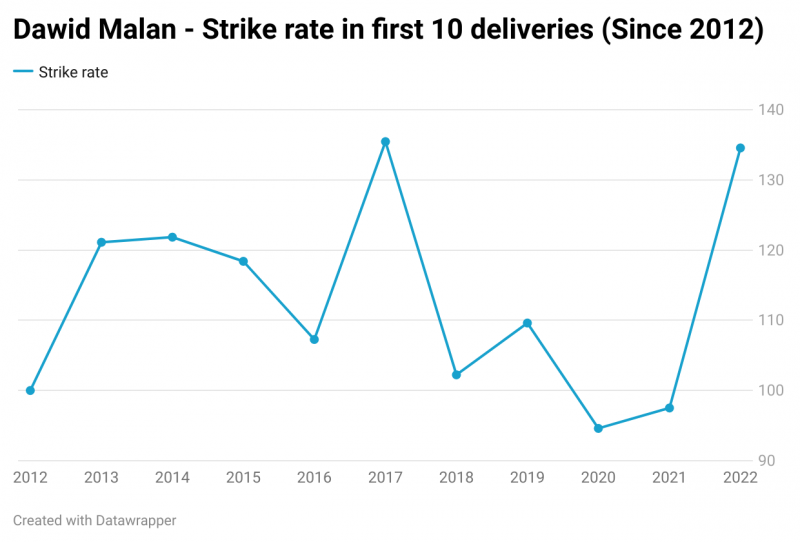 The reason? Intent. The main reason Malan has scored quicker early on this year is because he’s tried to hit more boundaries. His initial attacking shot percentage is now 70 per cent, a far cry from recent years when it sat below 50 per cent. As a powerful, skilful batter with a wide range of strokes, Malan is more than capable of stretching his legs and putting pressure back on the bowler and, more importantly, doing so before he’s had a 20-ball look. This increase in aggression has seen no drop off in his T20 average. Malan has had much more in the tank to give. 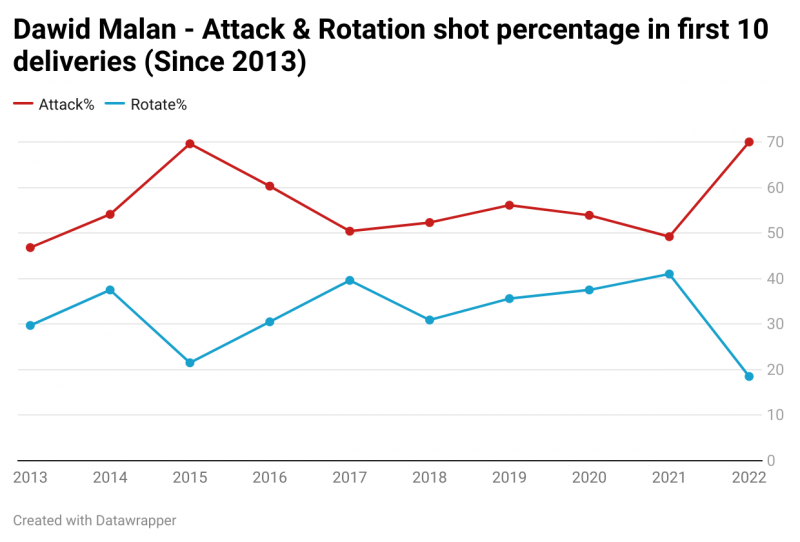 On closer inspection, what stands out is that the increase in early strike rate has come specifically against spin. While his pace numbers have improved, they fall within a reasonable window, and are boosted by increased exposure to the Powerplay – where everyone scores quicker. That isn’t true of his spin numbers though, with his strike rate rising steeply even without access to the fielding restrictions which come with the Powerplay overs. 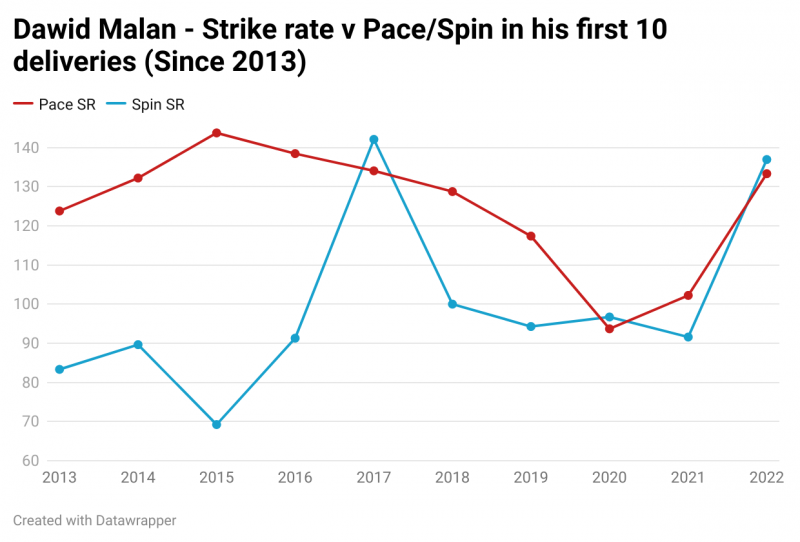 This drastic increase in scoring rate may be explained by the fact that he has been coming to the crease slightly earlier this year in comparison to last. In 2022, 80 per cent of Malan’s first 10 deliveries have fallen within the Powerplay, up from just 65 per cent in 2021 and 77 per cent in 2018-21. More balls with the field up this year has translated into more boundaries in the first 10 and his highest starting strike rate in five years. 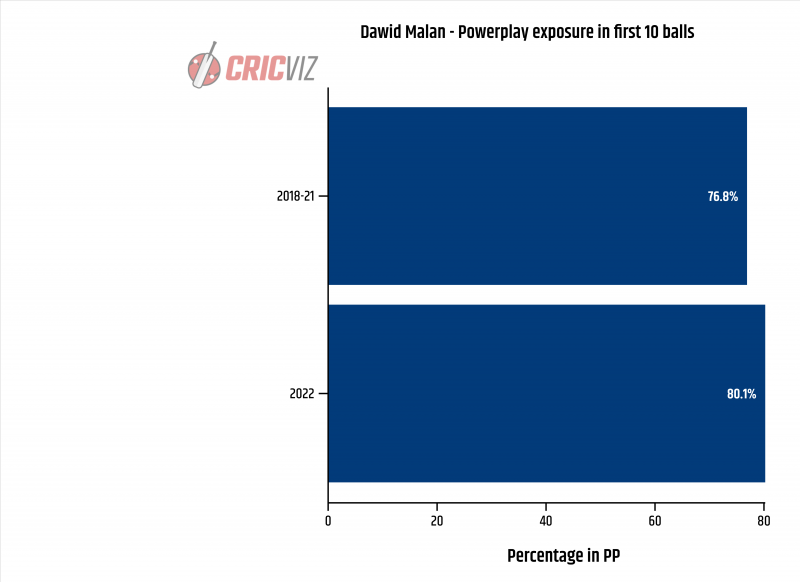 2022 hasn’t been a unique year for Malan in this sense however –  in 2017, his best-ever year in terms of starting strike rate, he faced 99 per cent of his first ten deliveries with the field up inside the Powerplay. So while he has been this quick at starting before, he has never done so with this percentage of early exposure. This can, and should be seen as progress for the left-hander in terms of shaking that ‘slow-starter’ label that had been tarnishing his reputation in the past few years.

Such is the nature of England’s white ball rotation, Malan has often been in the team without necessarily being in the “first XI”, the head on the chopping block for when one of Stokes/Bairstow/Morgan/Buttler return in the next series. Malan has generally countered that with an almost eerie consistency, and this international summer has been no exception. By slamming 77 (39) in the last game of the series against India and a brisk cameo of 43 (23) in the opener against South Africa, he has shown that he can be the ultra-aggressive, fast-starting, Powerplay-maximising batter that England need at three. He can fit into the brand of cricket the team wants to play.

Another superb, match winning knock of 88* (49) on Tuesday night in The Hundred saw him carry on this transformation, with him scoring 13 runs in his first 10 balls. Should his form continue in the competition, expect to see him at number three for all, if not most, of the Pakistan series and beyond into the World Cup. Even if his Hundred campaign fizzles out into obscure mediocrity, his left-handedness offers a solution to England’s homogenous, right-hander heavy middle-order problem. 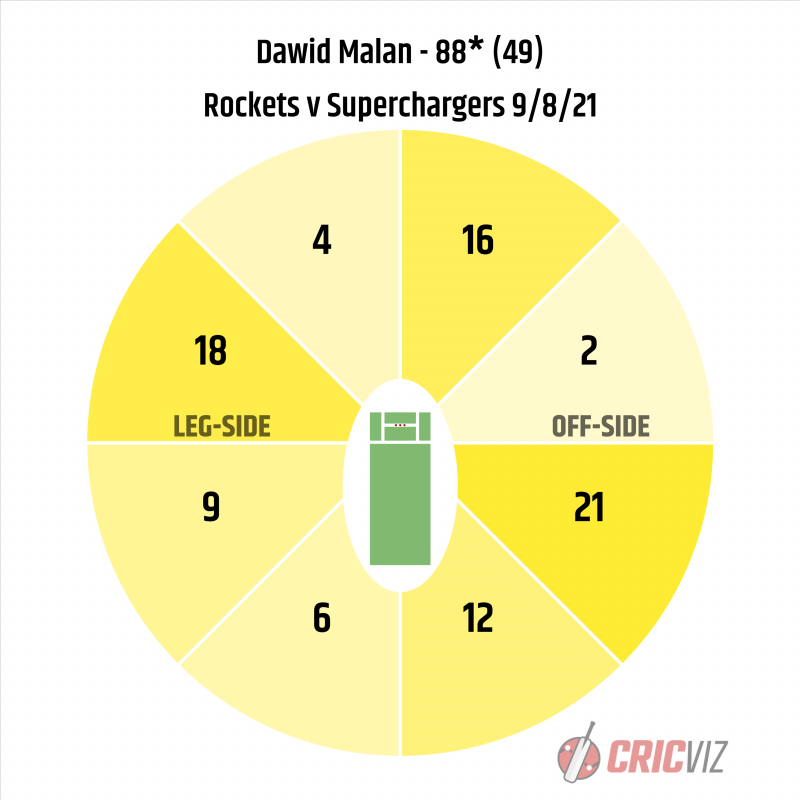 Furthermore, for a man who cuts and pulls so elegantly and with apparent ease, you would think that his game would be perfectly suited to the hard, fast pitches England will come across this winter. His record in Australia however is concerning. An average of just 27 and a strike rate of 116 puts it as his worst performing country he has played in across his career. This is due largely to an underwhelming BBL season in 2020/21 for the Hobart Hurricanes, in which he failed to capitalise on the lower quality bowling attacks and translate his obvious talent and international pedigree into bulk runs in the competition. 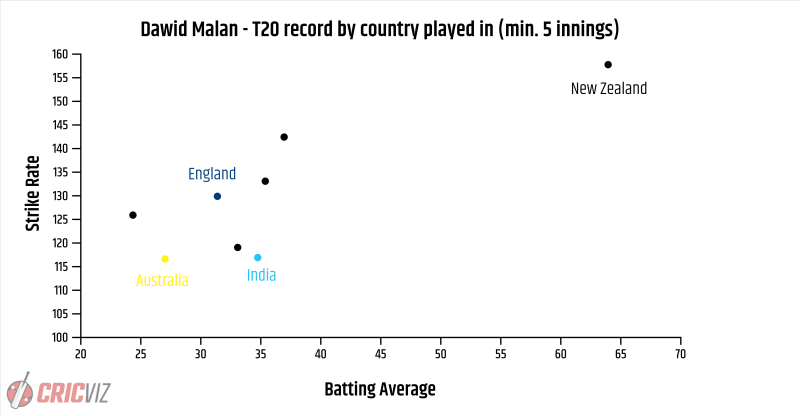 Left handed runs hit differently and Malan’s quality is obvious and clear to see. 2022 Malan can be the player that answers all of England’s batting conundrums heading forward, provided he doesn’t slip back into his old, sluggish ways.

To bet on The Hundred head to bet365. You can get last year’s winners: