Hampshire quick Kyle Abbott claimed a “pretty incredible” 17 wickets against Somerset, the best figures in the Championship since 1925, and was delighted to have dented Somerset’s title chances in the process.

Abbott’s 17-86 combined his first-innings spell of 9-40 with an eight-wicket haul in the second innings, to bundle the opposition out for 142 and 144 in Southampton.

Kyle Abbott finishes with 17-86 for Hampshire against Somerset – the best figures in first-class cricket since Jim Laker's 19-90 in 1956 ? pic.twitter.com/QNVcnWFLwV

“Everything I wanted to do worked. It just happened to be one of those days, it was incredible. When it started to reverse, it got quite fun.”

Abbott, who quit his South Africa career and moved to the county in 2017, now has Hampshire’s best figures ever, and the best overall numbers since Jim Laker’s 1956 tally of 19-90.

In the second innings, he sent back five of the top six batsmen, despite enduring a wicket-less initial spell of five overs, as the Somerset openers started strongly in their pursuit of 281. 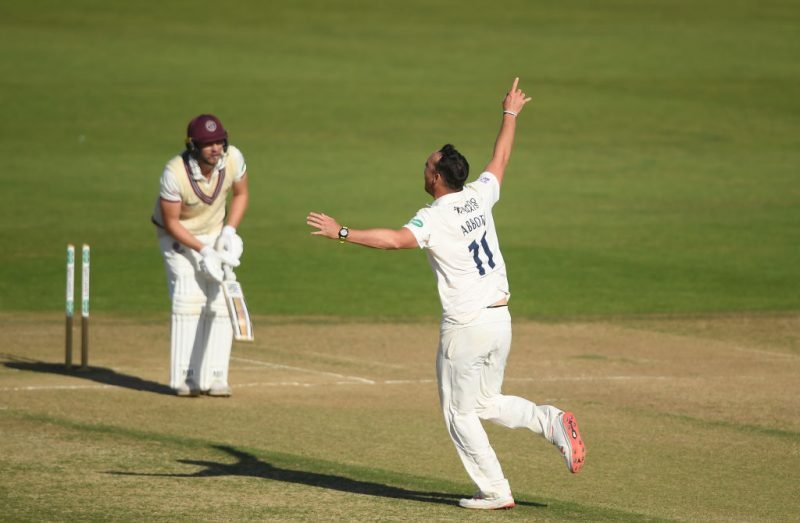 Abbott’s figures are now the best in Hampshire history

Once he started to reverse the ball, he pushed his lengths closer to the stumps to claim a combined tally of six leg-befores and four batsmen bowled in the game.

“We knew we had to get into their middle order and put pressure on them as 280 was a long way off,” he said. “At 86-0, we were just thinking [of getting] one of the openers and the captain, that was the goal.

“They were under huge pressure, they are young guys searching for their first championship; we had nothing to lose.”

The moment Kyle Abbott made history.

What a ball to do it with!pic.twitter.com/4cBwL7bayE

The twin spells gave Somerset’s Championship prospects a hard jolt; they now need to beat table-toppers Essex in Taunton next week to claim a maiden title.

“Would I prefer to finish third or spoil Somerset’s party? I wanted to spoil the party by a long way,” Abbott said. “They celebrated against us at the One-Day Cup final so we wanted to give them some hard work for next week against Essex.”

Somerset skipper Tom Abbell lauded Abbott for his exploits, but was confident his side would bounce back from the loss.

“Hats off to Kyle Abbott. He was unbelievable throughout the game. He got the ball tailing and we needed to adapt better as batters. He targeted the stumps and there were too many lbws and bowleds,” he said.

“This week hasn’t gone our way but we have a good opportunity next week. We will dust ourselves down before the Essex game.”