Inspired by a brilliant West Indian all-rounder, a galvanising captain and a shrewd coach, 1996 marked the beginning of a short but spectacular golden period for Leicestershire. Benedict Gardner pieces the success story together.

By the start of the 1996 season it had been over 20 years since Leicestershire had tasted County Championship success. However, slowly but surely a team was emerging that was capable of challenging for silverware. A second-place Championship finish in 1994 hinted at what they would go on to achieve, but the foundations had been laid even further back than that.

David Millns (Leics 1990-99): We should have won it in ’92! We beat Essex in July at home to go top of the Championship; Nigel Briers, James Whitaker and Phil Whitticase were batting very well and I was having a particularly good year with the ball, but I broke my foot, and we fell away. To win the Championship you’ve got to bowl sides out twice, and the bowling team that was so successful between ’96 and ’98 was already there in ’92. But in 1996 the difference was the runs that these boys scored and how quickly they scored them, and that year we batted just once on 10 occasions. Before that season Briers had retired, Laurie Potter and Justin Benson had gone, so the batting order completely changed. It was a major reshuffle.

Darren Maddy (Leics 1994-2006; England 1999-2000): What Jack Birkenshaw, our coach, was especially great at was identifying characters. Not superstars – we never really had any major international players – but what he did, within the Leicestershire budget, and the restrictions that a small club has, was identify people who wanted to play for Leicester, and who wanted to improve. Jack was a big influence on me and I owe him a huge thanks. Everything I’ve achieved is down to him. His coaching methods and everything that he introduced to me at that early impressionable age I still use today.

Paul Nixon (Leics 1989-99, 2003-11; England 2007): Nigel Briers, who was captain until 1996, and Jack Birkenshaw had built a squad together. They were both fascinated by the game and enjoyed each other’s success, and the successes of everyone in the team. Nigel was very much a pragmatic leader. He would say, “We’re doing it this way”, and we would. 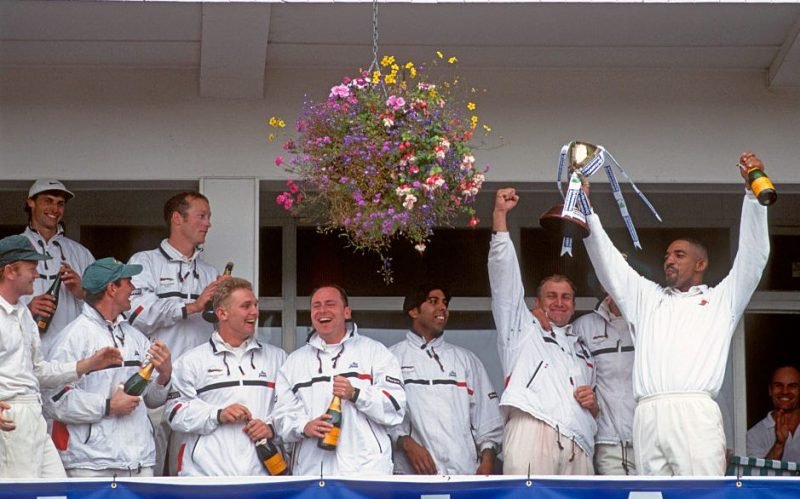 DMa: Nigel was a sergeant major. He installed discipline. He got the best out of everybody through hard work, good preparation and mental toughness. He led from the front and that’s what the club needed. With Nigel it was very much his way, whereas Jimmy Whitaker, who was captain in ’96, was much more inclusive, but he was only able to trust players because they’d had that discipline instilled. It reminds me of the transition between Nasser Hussain and Michael Vaughan, who took over an England team who had four or five years of strong discipline, so he could be more relaxed and create a different environment.

PN: Jimmy was quite a modern captain and liked having sports psychologists around. He created a very positive atmosphere and he was always emphasising the ‘do’s’, not the ‘don’ts’. If we couldn’t win the game, we’d make sure we’d draw. We only lost two games across that three-year period.

With 47 wickets at 21 in 1996, followed up by 60 in 1998, Mullally’s left-arm swing was an ever-dependable source of wickets in the glory years, and his colourful personality made him a popular character on the county circuit. He and Millns formed a feared new-ball partnership that tore through batting line-ups across the country.

DMi: At the start of that ’96 season Jimmy sat down with the bowling team and said, “If we are going to win the Championship we need to bowl people out twice. What do you need to do that?” There were times when James very much ran it out there but a lot of time he would ask the bowlers, “Who do you think should bowl next? What do you think should happen?” He also got the right people in the right places in the field and he got them there by talking to them. The fielders we had were phenomenal. You didn’t see chances, even half-chances, going down. Chris Lewis in the gully was sensational. Phil Simmons was second slip – he was like having two and-a-half slips by himself. Phil came in ’94 as an overseas player and we came second and then won it twice, so you could say he was the catalyst to our success.

DMa: Phil was one of the main contributors to us winning the Championship. With the bat he scored hundreds and took bowlers apart, and with the ball he was very lively, and he had knack for breaking partnerships. At that time he was the perfect all-rounder for the club, and he was such an immense character. He certainly lifted the other 10 players around him. In all my years that I’ve played county cricket there’s been nobody who’s had that same effect on the whole team.

DMi: But oppositions weren’t looking at our team thinking we’ve just got to get Phil Simmons out or just watch out for his bowling. It was such a team effort.

The lynchpin. With 56 wickets and 1,244 runs, the Trinidadian was the driving force behind the 1996 Championship victory and he was named as one of Wisden’s Cricketers of the Year in 1997. Simmons played 26 Tests and 143 ODIs for West Indies but was rarely able to replicate his superb county performances on the international stage.

Leicestershire went into the last game of the ’96 season, at home against Middlesex, in pole position to win the title, and finished it off in style in front of an exuberant Grace Road crowd.

PN: We got a big score and batted once. Alan Mullally always looked like a top-order batsman in the nets – he had rhythm, he had grace, he had timing – but as soon as he got outside he was terrified of anything over 70 mph. But even he got a quick 70-odd and was thrashing Gus Fraser everywhere.

DMi: We found out during the tea break on the third day that Surrey couldn’t secure enough points to catch us and our tea lasted for about 45 minutes! In fact the umpires came up and said, “What are you doing?” I think we each drank a bottle of champagne before we played that last session! We had a hell of a party that night. 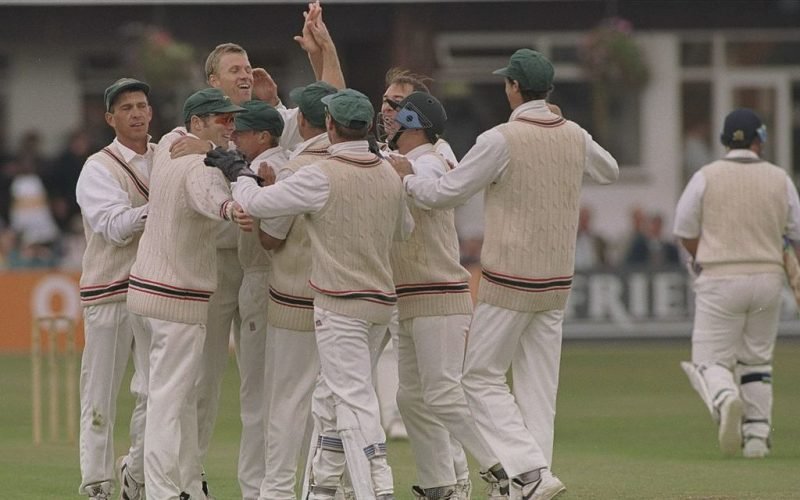 DMa: I remember Paul Nixon leading the conga around the Grace Road boundary and supporters climbing on top of the sight-screen and falling asleep because they’d drunk so much. It really was a team and squad achievement, especially in ‘96. Everybody dovetailed and made valuable contributions throughout the whole year. There was nothing those guys wouldn’t do for their team.

Leicestershire were one of the counties worst hit during a rain-afflicted ’97 season, losing over 2,000 overs to rain and failing to reach a result in 12 of their 17 games. Midway through the ’98 season they were part of a hotly contested title chase and when Northants set Leicestershire a target of 204 in 20 overs, they were left with little option but to give it a go. 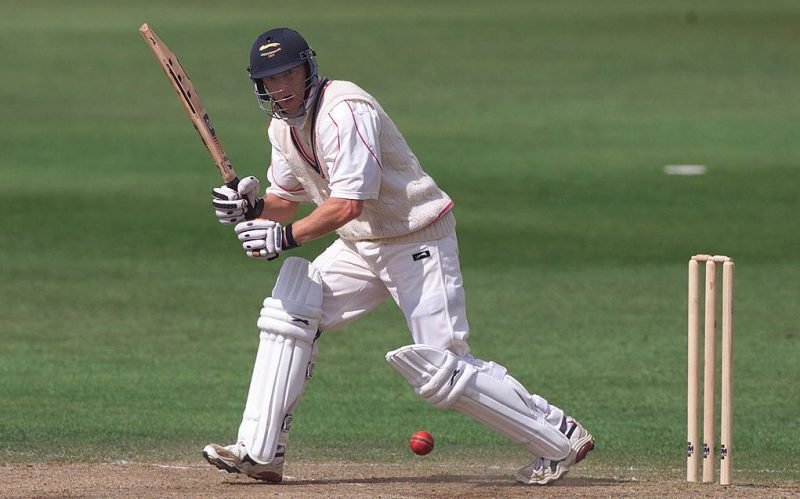 Ben Smith in action for Leicestershire

PN: Vince Wells was the instigator in that. He said, “This is a flat wicket, you just never know”. I didn’t think we’d get anywhere near it. I went to the physio’s room and all of a sudden I could hear Leslie Springer, our amazing West Indian supporter, shouting “Brandy time”, as he would whenever we got a boundary, every few seconds. Then I went back into the dressing room and I heard the announcer say, “That’s Vince Wells’ fifty”. It had come in about 30 balls! I looked out onto the pitch and every Northants fielder was on the boundary edge. Grace Road is the second biggest ground in the world behind Melbourne so it’s tough to throw it right over the top of the stumps, and we thought even if we smash it right to a fielder we’ll try and run two. Chris Lewis got an amazing 70-odd off about 30 balls.

The last of those six games came at the Oval against Surrey, who needed to win to claim the title. For Leicestershire, a draw would do the job.

The homegrown star. In 1996 Smith made the transition from academy prospect to nailed-on selection, scoring 1,068 runs including two centuries. Two years later he surpassed Simmons to top the club’s averages with 1,165 runs at 64.72, the highlight of which was a superb 204 in a crushing defeat of Surrey in the last game of the season.

DMi: We batted first and were in a bit of trouble but then Ben Smith, Aftab Habib and Paul Nixon got big runs. We bowled them out on the third day, effectively sealing the title, but Simmons, who was captain, wanted to enforce the follow-on and win the game as well. It was like getting past the finishing post and someone saying, “You’ve got to run the next lap as first as you can”. It was getting to the end of that third day and Adam Hollioake was batting with [Rupesh] Amin, the No.11, and we just couldn’t get them out. Mentally and physically we were done. But Adam said to Amin, “Let’s start playing a few shots. The weather will be fine tomorrow so there’s no way we are going to last”. Then he turned to us and said, “This game will be over tonight, lads”. It would have been a damp squib to come back the next day, so Adam did well there.

PN: I’ve still got the bail from the stumping that won the game in my shed at the bottom of the garden. That night we bought a bottle of champagne which was the biggest bottle I’ve ever seen. You could get a tennis ball down the neck! When we ordered it the girl behind the bar said, “Are you serious?”. It took two of us to pour it!

After starting his career at rivals Nottinghamshire, Millns’ 67 wickets in 1996 brought the title to Grace Road for the first time in 21 years, as the right-arm quick topped the county’s wicket-taking charts. In the same year he scored his maiden first-class century and whilst his 34 wickets in the1998 campaign represented a slight drop-off, his pace and aggression were still key.

DMa: Surrey went away from that hurting and then they were at the peak of their powers and dominated county cricket for the next six years.

DMi: That was just about the time that Sky came in. Some of us doubled our salaries by leaving and some of us tripled them. People left for various reasons but it was money really, and Leicestershire, not having a Test match ground, couldn’t match that clout. That’s just the nature of the business. A lot of factors came together, a lot of things were built into that team years before our successful few years. We were something like 38/1 outsiders to win the Championship in ’96. Whether we’ll see that again, who knows? But then again, who’d have ever thought Leicester City would win the Premier League?