A string of technical problems significantly affected the start of live coverage of the Bob Willis Trophy final between Somerset and Essex, the first match of its kind in English domestic first-class cricket.

Much fanfare was made of the move to show the showpiece live online on a variety of platforms, in particular on the BBC website, the ECB website, and Sky Sports Cricket’s YouTube channel.

However, a lack of audio when the broadcast was originally started meant that live footage was pulled until one minute before the start of play on Sky Sports Cricket and until 10 minutes after on BBC, in which time Tom Lammonby had become the first wicket to fall.

Even after the coverage began, issues persisted, with viewers commenting on the audio being out of sync on Sky Sports Cricket’s YouTube channel, and also on the lack of a camera angle from behind the bowler’s arm from one end. 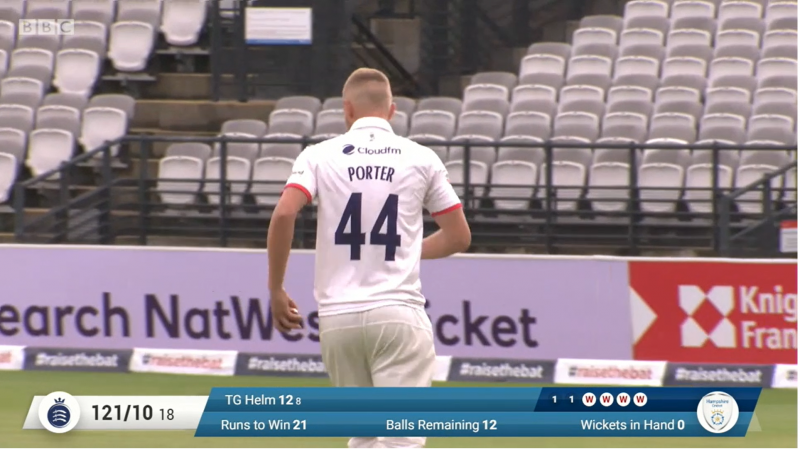 A screenshot of the BBC stream, showing incorrect score information

The BBC’s stream struggled with those issues, and also displayed the end-of-game score from the last game played at Lord’s, a T20 between Hampshire and Middlesex, for a time, with footage noticeably jerkier on BBC than on Sky Sports Cricket and the ECB’s site.

Half an hour into play, the live-stream on the BBC was taken down, with a graphic explaining they were experiencing a “temporary fault”. When coverage resumed, the jerkiness of the footage had been fixed.

While technical issues and less-than-ideal camera angles might still be par for the course by county live-stream standards, many had hoped the fixture would be available to watch live on Sky Sports Cricket’s TV channel, rather than just online. ESPNcricinfo reported that the decision not to show the game on TV was down to the clash with the IPL, and the fact that the game is being played at Lord’s, currently undergoing a significant redevelopment.