Four years ago Australia and England’s female teams played out a deathly Test match at Canterbury that prompted a backlash against the format. With the teams in action this summer, Raf Nicholson, writing for Wisden Cricket Monthly, asks where women’s Test cricket fits in the modern game.

When this summer’s Women’s Ashes Test gets underway at Taunton on July 18, one thing is for sure: both sides will be hoping to avoid a repeat of the last women’s Test played in England. That was at Canterbury in August 2015, a match which England lost to Australia by 161 runs, along the way playing out 34 maidens and 436 dot balls in a first-innings total of 168 all out.

More to the point, though, was the way the match – the first ever women’s Test to be screened ball-by-ball by Sky – was greeted by the media. In the aftermath, a series of journalists called for the format to be scrapped altogether, describing the spectacle as “excruciating” and “the worst possible advertisement” for women’s cricket. Current England captain Heather Knight remembers it starkly. “One of the darker summers of my career. It was something that hurt us a lot as a team.”

England Women have announced their 14-member squad for the first game of the multi-format Ashes. ?https://t.co/samIeyrRtP

While they might not admit it, the furore surrounding the Canterbury Test appears to have caused a distinct loss of nerve amongst some administrators when it comes to the multi-day format. Three Tests had been played in the 2014 calendar year, two of those featuring India, but Canterbury put paid to that fledgling revival. The only Test the world has seen since was the Ashes day-nighter at North Sydney in late 2017.

During that match Cricket Australia’s Belinda Clark, a leading member of the ICC’s Women’s Committee, appeared live on air to reiterate the ICC’s policy on women’s Tests, which involves exclusively focusing on the shorter formats. “If we’re thinking about growth of the international game, the answer to that question is T20,” she said. “I’m not sure that women’s Test cricket holds a place in people’s hearts.”

The ICC now runs the show; and commercial realities have come to dictate the number of women’s Test matches

Women’s Tests have been played since December 1934 when a group of English pioneers, led by the formidable Betty Archdale, sailed to Australia and New Zealand to play out the first-ever women’s internationals. Since then South Africa (in 1960), India (in 1976) and West Indies (also 1976) have joined the fray, with Pakistan, Sri Lanka, Ireland and even the Netherlands also participating in the odd Test along the way.

Until the ICC took over control of women’s cricket in 2005, the format was one which was highly valued by the game’s administrators: a survey conducted by the International Women’s Cricket Council in 2000 showed that “all countries indicated support for a combination of Test and one-day cricket”. A multi-Test series, now seemingly a distant dream, was for many years the norm. 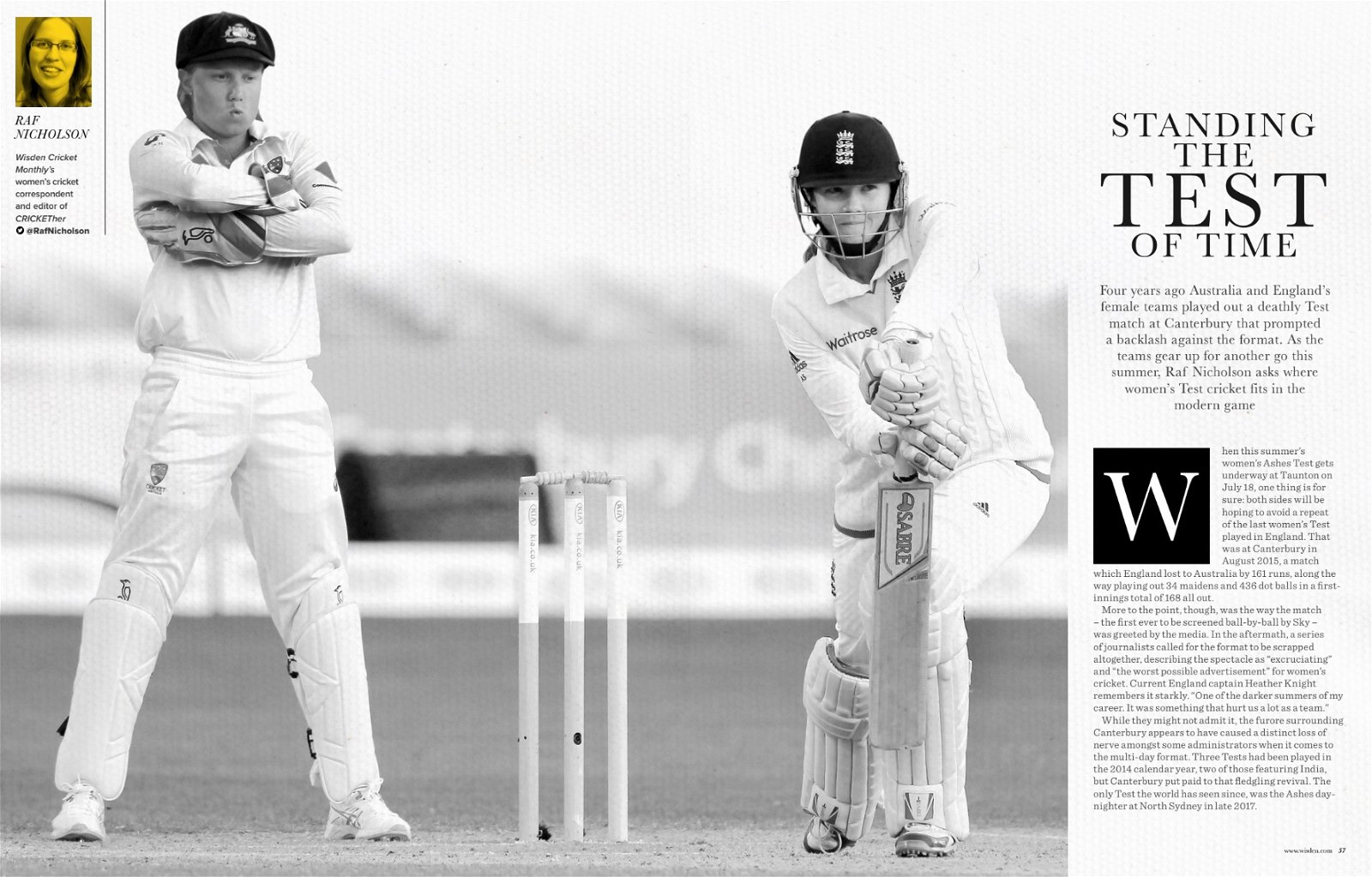 This article was first published in issue 21 of Wisden Cricket Monthly. Subscribe here

The ICC, though, now runs the show; and commercial realities have come to dictate the number of women’s Test matches. In the last decade, only eight have been played. Hosting Tests is expensive, and provides little financial return compared with the ubiquitous crowd-puller that is T20. Arguably the money is better spent in other ways, such as paying the players, with all teams now moving towards full professionalism. 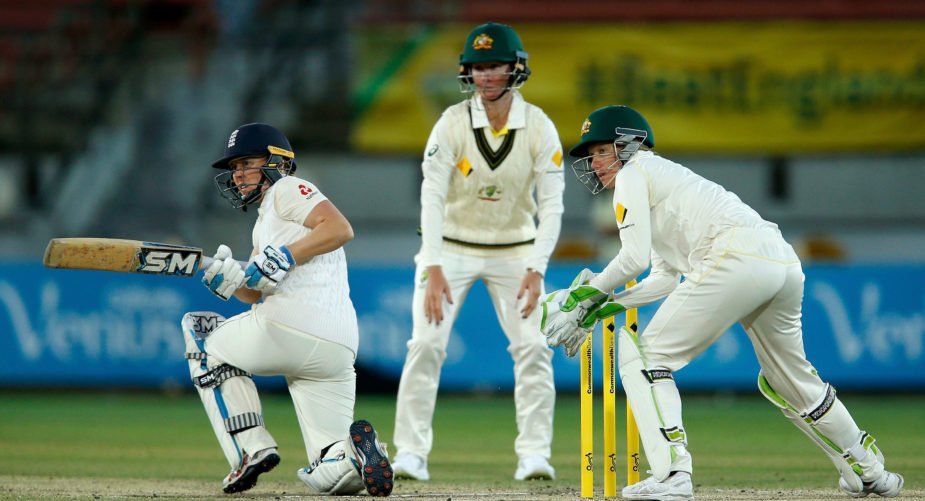 The problem now being faced is that the lack of multi-day cricket leads to a situation where female players have little familiarity with it and struggle to adapt their game. Both sides will play one three-day warm-up ahead of Taunton this summer, and that will be that in terms of preparation. “The mental side of Test cricket is hard,” says Knight. “I remember when I hit 157 in the Wormsley Test in 2013, I was drained for days afterwards. You have to learn on the job.”

Anya Shrubsole, veteran of five Tests, concurs. “You’re learning to play a format of the game while playing it. There was a lot of criticism around the Canterbury Test, but to go and play a format as a one-off every two years that you never play otherwise – it’s hard to get that right all the time.” 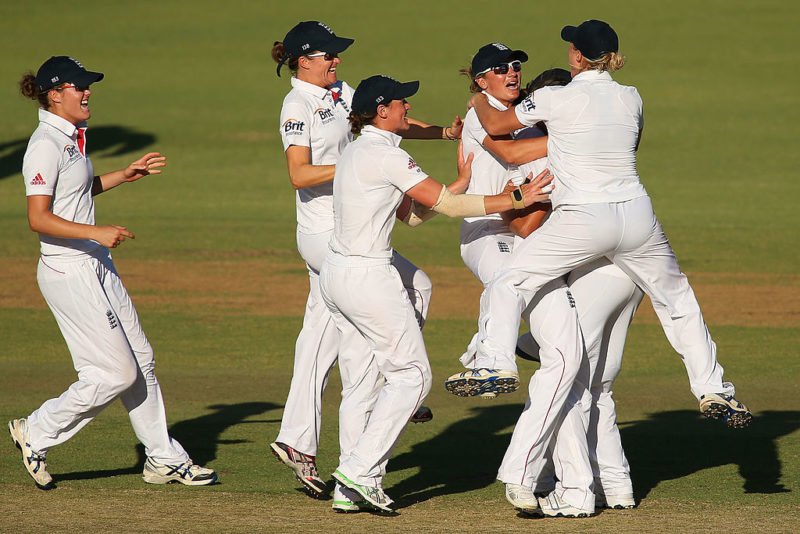 Might it be better, then, to just give up the ghost and abandon women’s Test cricket altogether? Not according to the players. “One of the benefits of not playing it very often is it’s so exciting when it comes around,” Shrubsole says. “It’s the same as a World Cup – you only play one every four years, so when they come around they’re so unbelievably special.”

There is certainly a real sense that, of all the matches this summer, it is the Test at Taunton that players from both sides are desperate to play in – making a nonsense of Clark’s statement that women’s Test cricket fails to ‘claim a place in people’s hearts’. “I’m so excited to pull on the whites,” says the usually placid Knight. “I’d absolutely love to play more Tests.”

Listen/subscribe on the Podcast App or Spotify.https://t.co/UzOezjw7nf

And why wouldn’t they, given that Test cricket remains the premier format in the men’s game? As former Australia international Mel Jones said on a recent Wisden podcast: “I grew up, as did all these players, watching Test match cricket on the TV and knowing that that’s the pinnacle. To get your baggy green, for any Australian cricketer, is the ultimate. We need to allow that opportunity to unfold too for the women.” It seems undoubtedly true that to deny women the opportunity to participate in Test cricket is to deny them a fundamental element of cricketing equality.

So what’s the answer? More multi-day cricket for women at domestic level, perhaps? More Tests between different nations, so that instead of one Test every two years it becomes every few months? No doubt the debates will continue to rage. For now, fingers crossed that both teams can produce a thriller at Taunton. The world will be watching.

The Long Game: A Short History

The epitome of the hard-fought draw, and captain Rachael Heyhoe Flint’s finest hour. England had been all out for 134 on the first day; Australia followed up with 379. By the time Heyhoe Flint entered the fray England were 76-3, still 169 runs away from making the Aussies bat again. She ultimately spent eight-and-a-half hours at the crease, grinding out an agonisingly slow 179 as the rest of the England team watched on nervously – no nails left by the time the captains officially shook hands at 6pm on the final day. It meant that the series was drawn (0-0), ensuring England kept their hands on the Women’s Ashes for another eight years. 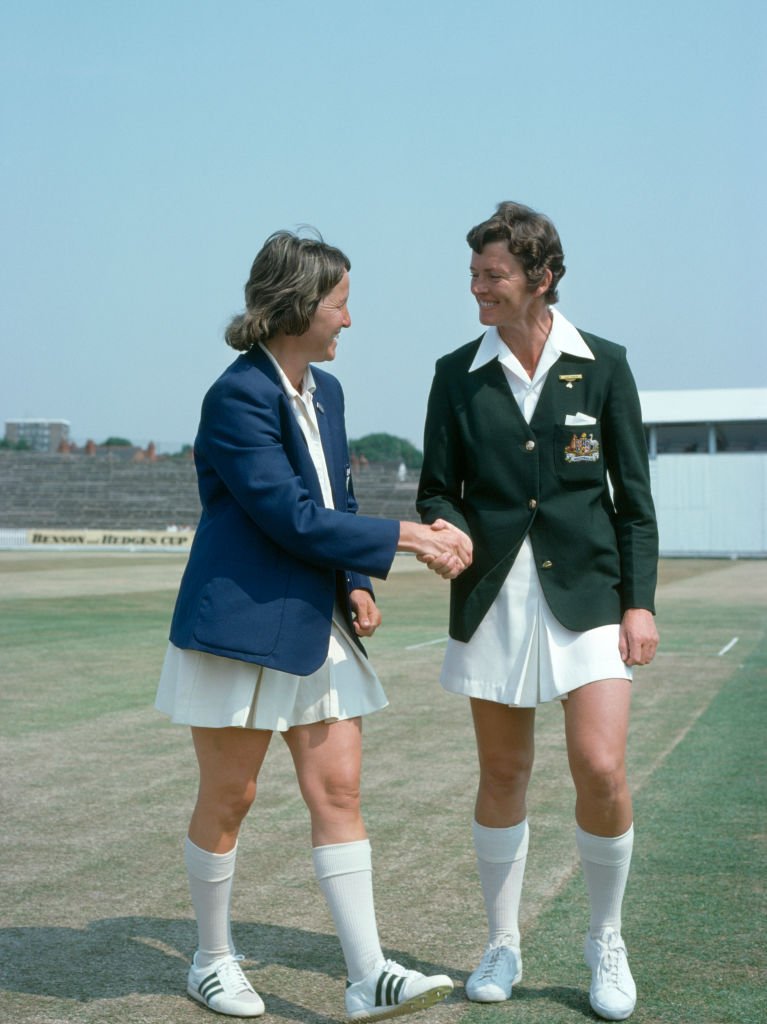 One of only 12 Tests ever played by West Indies. This one came on their first tour of England, at a point when they’d only been playing international cricket for four years – and they almost caused a dramatic upset. England had actually declared their first innings on 214-4, showing a distinct lack of respect for their opponents. In reply, West Indies managed 188, and their fast bowlers then turned the tables, tearing through the English line-up to bowl them out for 164 (Enid Bakewell’s unbeaten 112 the only resistance). The West Indians fell 25 runs short in their fourth-day run chase – but only after they’d given their hosts the fright of their lives.

Notable for featuring the Test debut of Clare Connor, now the ECB’s managing director of women’s cricket, this was another nail-biter in a series of them – England having won the previous match by just two runs. This time around they held out for a draw on the final evening with one wicket to spare. At 138-7 with most of a session left to play, all seemed lost. But Connor, batting at No.9, chipped in with 13 and swallowed up a valuable 43 balls. Bowlers Debbie Stock and Clare Taylor then somehow hung around for the last two hours (scoring a mere 18 runs between them) to leave the Indian bowlers intensely frustrated, and England celebrating an unlikely 1-0 series win. 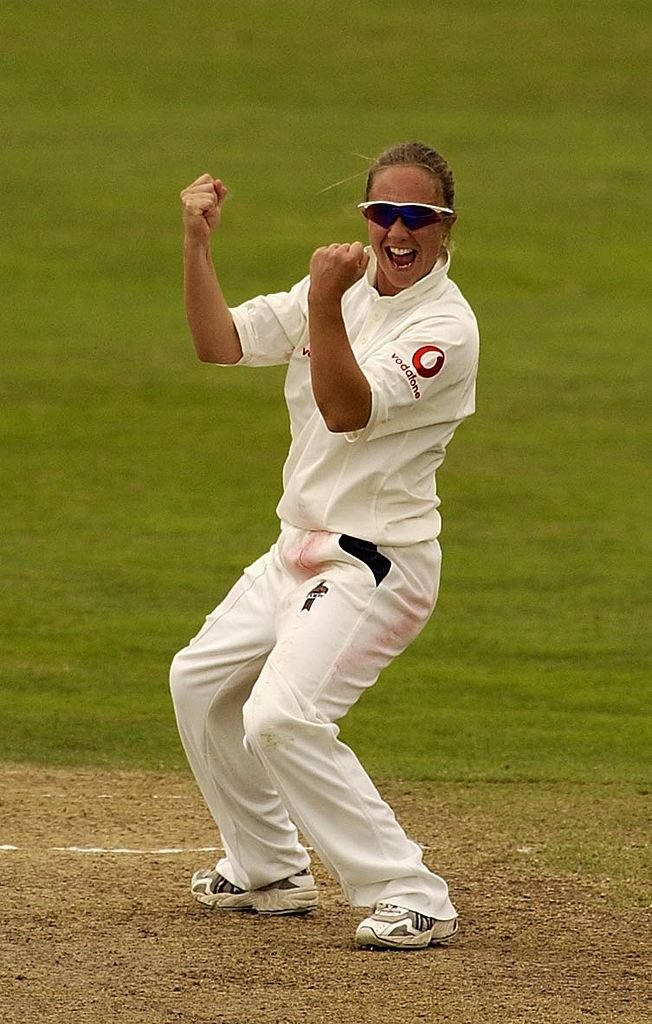 Anya Shrubsole remembers this one as “an unbelievable game of Test cricket – everything Test cricket can be.It ebbed and flowed, you weren’t sure who was going to win until right at the end. It was a brilliant Test to be part of.” This match had it all: accidental beamers from Katherine Brunt, a dramatic return to international cricket by Rene Farrell, the last-ever Test half-century from Charlotte Edwards and a fiery debut by pacer Kate Cross (6-70). Australia, having been just six runs ahead on first innings, ended up chasing 185 to win; it was left to Shrubsole (4-51) to win the game for England on the final morning – the 61-run victory belying the tense nature of the previous few days.

This article was first published in issue 21 of Wisden Cricket Monthly. Subscribe here