At first it felt all too familiar as England slipped to 84-5 in 13.3 overs including a stellar run out from the ubiquitous Ellyse Perry.

But as Lauren Winfield and Katherine Brunt walked off, punching gloves having added 55 runs in 6.3 overs, we saw something we hadn’t seen in what felt like years: Australia were rattled.

Enough to secure a consolation win?#Ashespic.twitter.com/raTade9NQT

England kept up the pressure at the start of their defence. Their boundary riding was pumped up – Australian, almost – and Anya Shrubsole recovered from being hit for a boundary at the start of each of her first two overs to concede just two more runs from the other 10 balls.

Sophie Ecclestone, who was the pick of the bowlers again, struck the key blow, pinning Meg Lanning in front, pad struck just before bat. It was the first time England had dismissed the Australian skipper in T20Is since March 2016, the Megastar having made the small matter of 335 off 241 in between times.

For the first time since March 2016, after 335 runs and 241 balls, Meg Lanning has been dismissed in a T20I against England.pic.twitter.com/GbPfzXVlrK

But the most purely joyous moment of the evening went to debutant Mady Villiers. She betrayed little tension in the field; in fact, she seemed to be enjoying the occasion of it all, of the biggest night of her life.

If any nerves were going to set in, it was after her second ball, when Alyssa Healy struck one back at the off-spinner, firmly but at a catchable height, and she shelled it. On another night, it could have been a match-deciding error.

Heather Knight came in to put an arm round the shoulder and have a calming word, and the rest of the over went by without incident. But only one thing would dispel the memory completely, and in her next over, Villiers got it, Healy clubbing a full toss down long-off’s throat.

Having dropped her two overs ago, Mady Villiers, on debut, has dismissed Alyssa Healy.

England are right in this game!pic.twitter.com/PKZZLqZWxJ

If there was an element of fortune in that wicket, two balls later she had a dismissal to be proud of, drawing Ash Gardner forward and beating her prod. Amy Jones completed the stumping deftly. With that double-strike, England had a grip on the match they wouldn’t let slip. They still couldn’t find a way through Ellyse Perry, who finished unbeaten on 60, but kept her quiet long enough to record an 17-run win. 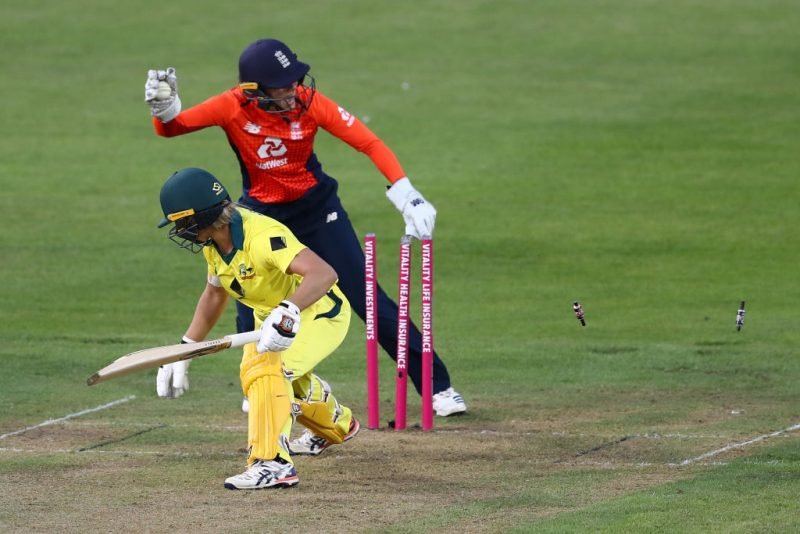 Of course, a dead-rubber victory shouldn’t mask all the things that have become evident over the past month. The gap between Australia and England remains large and growing, and will until England develop a domestic system to rival the one Down Under. The defending champions still go into next year’s T20 World Cup as heavy favourites.

But as much as England can’t solve their very real problems with a bit of energy in the field and the inclusion of an unawed youngster, this should serve as a reminder that they haven’t become a bad team overnight either, and that as good as Australia are, they can be beaten.

Heading into next February’s showpiece, this is just the fillip England, and maybe the game as a whole, needed.