England’s famous victory in the 2005 Ashes series was more than just a generation-defining triumph – it also marked the end of an 18-year drought.

The Nineties and early 2000s were a period of utter dominance for Australia, who rattled off eight Ashes series in succession. With giants of the game like Mark Taylor, Merv Hughes, Shane Warne, Glenn McGrath, Ricky Ponting and Steve and Mark Waugh coming to the fore, the Aussies developed an aura of invincibility.

Home or away, it didn’t matter. Australia picked four wins Down Under and four in Blighty. Overall, between 1989 and 2005 they won 28 of 43 Ashes fixtures against England, drawing eight and losing just seven.

Here is the story of England’s seven bright spots amid a prolonged storm of grey.

England had absolutely nothing to lose by the sixth Test of the 1993 Ashes, because everything had already gone wrong.

Australia held a 4-0 lead. Graham Gooch had resigned the captaincy after losing the fourth Test and chairman of selectors Ted Dexter was stepping down too. To somehow make matters worse, Graham Thorpe broke a finger in the nets an hour before the toss.

Martin Bicknell had pulled out a day before the Test through injury. Angus Fraser had only played a few games prior after a hip injury which had sidelined the fast bowler for over two years.

It’s fair to say that Michael Atherton, at just 25 years old, could hardly have assumed the England captaincy in less auspicious circumstances.

Atherton won the toss and elected to bat first on a quick-looking wicket at The Oval. It proved a good decision, as Atherton himself (50), Gooch (56), Graeme Hick (80) and Alec Stewart (76) all made substantial scores as England posted 380 in the first innings.

So far so good. Now England’s bowling attack had to produce. Fraser, back in the side for the first time in 31 months, was joined by Devon Malcolm and Steve Watkin, the leading wicket-taker in county cricket that year.

The three seamers blended perfectly, reducing Australia to 196-8 on the second afternoon. Ian Healy’s unbeaten 83 helped the away side avoid the follow-on, but they finished on 303 to give England a handy 77-run first-innings lead. 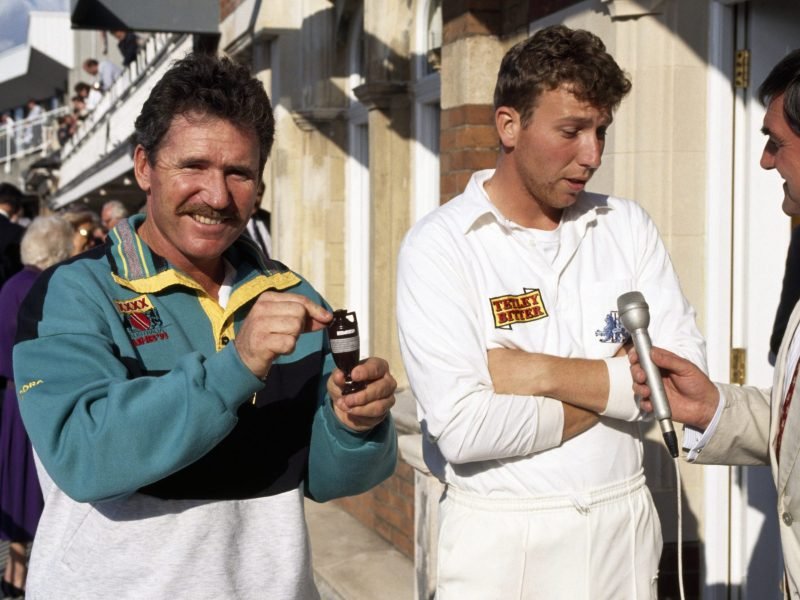 Atherton was made England captain at just 25 years old

Gooch may have been 40 years old, but he could still play. He made 79 in the second innings to pass David Gower as England’s highest Test run-scorer and Mark Ramprakash, who was called up late on to replace the injured Thorpe, made 64 down the order to cement England’s lead.

Australia required 391 in 123 overs to win, but they never got close. Watkin demolished the top three of Michael Slater, Taylor and David Boon to leave them 30-3 and Australia never recovered, reaching 229 thanks to late runs from Warne and Paul Reiffel.

Fraser won the Man of the Match award for his eight wickets. England had ended a run of 2,430 days, 11 hours and 49 minutes since their last Test win against Australia in December 1986.

Despite their victory at the end of the 1993 Ashes series, winning hadn’t become a habit for England. By the time the next Ashes triumph came, they were already on the back foot, having lost two and drawn one of the previous games to find themselves 2-0 down in the series.

Once again the win was built on the solid foundations of first innings runs. Atherton and Gooch got England off to a good start before Mike Gatting pitched in with 117 in Adelaide as the tourists posted 353.

Greg Blewett scored a century of his own in reply, while captain Taylor made 90 as Australia reached 419, but Thorpe’s 83 was followed by a crucial innings of 88 from just 95 balls by Phil DeFreitas as England set Australia 263 to win.

What a way to start a home series. Australia won the toss and decided to bat on a lush pitch at Edgbaston, but they hadn’t accounted for England’s bowling attack of Malcolm, Darren Gough and Andrew Caddick.

Just 31.5 overs later they were all out for 118 as Caddick claimed figures of 5-50. Just three Aussies made it into double figures, including Warne, who top-scored with 47. 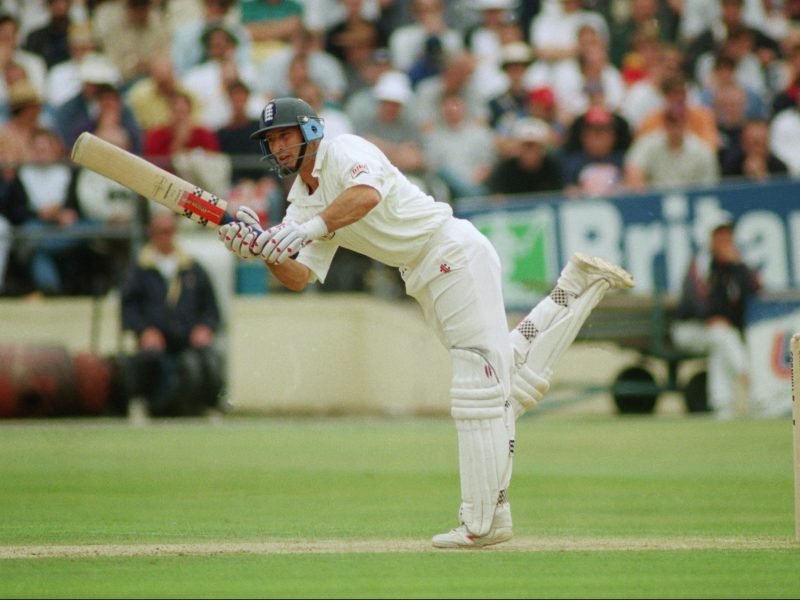 The stage was set, but it looked initially as England weren’t ready to grasp the opportunity, as they slipped to 50-3. That’s when Nasser Hussain and Thorpe came together for a memorable partnership of 288.

While Thorpe made 138 of those, it was Hussain’s innings which stood out, with the right-hander racking up 207, his highest Test score. England declared on 478-9, but they were made to wait for victory as Taylor (129) and Blewett (125) put on 194 together as Australia hit back with 477.

The hosts needed 118 runs to start the series with a victory and they got them fairly easily as Atherton (57 not out) and Stewart (40 not out) saw them home for the loss of one wicket.

Unfortunately for England, their win at Edgbaston was not the start of something. By the time they reached the sixth Test at The Oval, they were 3-1 behind and yet another series had slipped past them. But, with the pressure off, they were to edge a low-scoring series finale thanks to left-arm spinner Phil Tufnell. 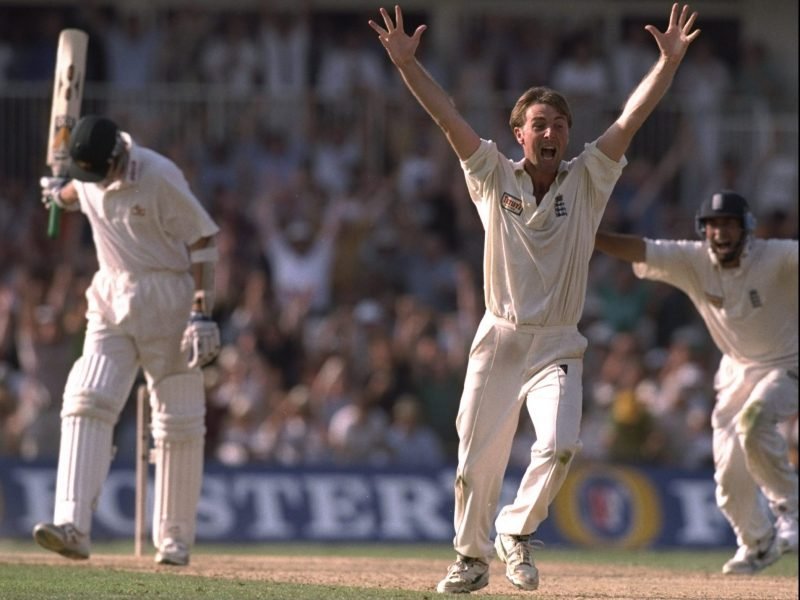 Tufnell took 11 wickets to win it for England

England won the toss and batted first, but could only muster 180, as McGrath returned figures of 7-76. Tufnell followed the seamer’s lead, taking 7-66 as the game rattled on a rapid pace, Australia making 220.

Thorpe (62) and Ramprakash (48) then ensured England had something to bowl at, but their innings of 163 meant Australia needed only 124 to wrap up the series 4-1. They got close, but Caddick’s 5-42 and Tufnell’s 4-27 saw the visitors fall 20 runs short on 104 and give England the consolation of a 3-2 series scoreline.

Another familiar setting for an England Ashes win. By the fourth Test the tourists were already fighting an uphill battle, with the score at 2-0 to Australia.

It didn’t start well: they lost the toss and were put in to bat in the Boxing Day Test at the MCG and lost Atherton in the first over. Luckily, Stewart was not fazed by the intimidating environment, scoring 107 to anchor the innings of 270.

Steve Waugh responded with 120 in Australia’s first innings of 340 as Gough returned 5-96. Stewart and Hussain scored half-centuries, but England’s total of 244 didn’t seem enough, setting Australia 175 to win and clinch the series.

Luckily for them, they had Dean Headley in a purple patch. The seamer took career-best Test figures of 6-60 as Australia’s middle order disintegrated following the dismissal of Mark Waugh for 43. They were bowled out for 162 to give England a narrow win.

England were 3-0 down by the time the fourth Test began at Headingley in the summer of 2001. The pattern was repeating itself and things were looking familiarly gloomy when Australia won the toss, elected to bat first and put up 447, thanks to centuries from Ricky Ponting and Damien Martyn.

Stewart was the only player to pass fifty in England’s response of 309. The game was slipping away from them once again. 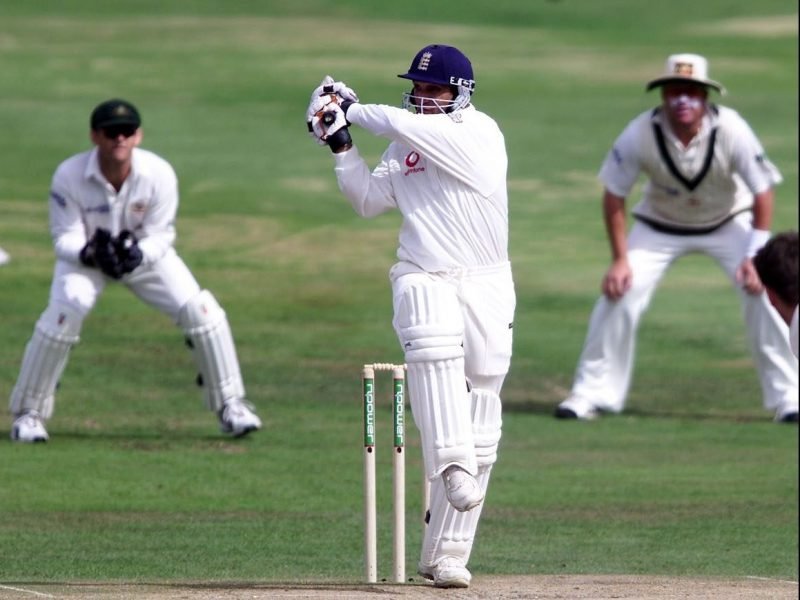 Butcher scored a Test-best 173 not out

Australia declared on 176-4 after a run-a-ball 72 from Ponting to leave the hosts a target of 315. Even to the most rose-tinted of England supporters it looked improbable, given what had come before.

When Atherton and Marcus Trescothick fell to leave England 33-2 it appeared nigh-on impossible. But Butcher had other ideas, compiling a belligerent and brilliant unbeaten 173 alongside captain Hussain (55) and Ramprakash (32) to get them home for the loss of four wickets in just 73.2 overs.

Vaughan prevents a whitewash Down Under

Picture the scene: England are 4-0 down coming into the final Test in Sydney. They’ve been beaten by a margin of 384 runs, an innings and 51 runs, an innings and 48 runs and five wickets. It hasn’t been a fair fight. They are battered and bruised and likely looking forward to flying home.

England won the toss and chose to bat first. Butcher made 124, Hussain 75 as they posted a respectable but not daunting score of 362. Steve Waugh and Adam Gilchrist then scored centuries of their own, but Australia only managed 363. It was game on; England just needed a big second-innings total.

That’s where Vaughan came in. Despite getting a duck in the first innings, the England opener was in fine form and he showed it, scoring a fantastic 183 in over six and a half hours at the crease, and allowing Hussain to declare on 492-9 and set 452 for victory.

Caddick ensured they got nowhere close to that, taking 7-94 to bowl the Aussies out for 226 and finish the series with a flourish.